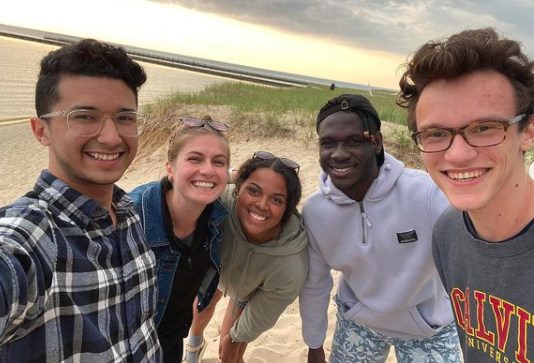 After three months of summer preparations, Calvin's student senate is ready to work.

After an intensive summer of preparation, including a book club, training sessions and retreats, Calvin University’s student senate is ready to serve.

Senior accounting major Emmanuel Essien won the election for student body president in April. Student senate’s preparations for the 2021-2022 academic year began in May and continued through the end of August.

All senate members participated in a summer book club as well as training sessions. Members of the presidential cabinet also attended two retreats and collaborated on selection of team leaders for the ensuing year.

“Student senate is somewhat set apart as a student organization; all student organizations have missions and niches, and we hold a big respect for that and the time they put in. But student senate’s niche is to represent the student body well and work with administration – we want to be sure that we do that well, and that takes some time,” said Theo Perumal, one of the three team leaders selected this year. Summer preparation aimed to prepare senators to do just that.

The Essien administration placed a strong emphasis on personal leadership development during summer activities, with the hope of increasing successful work throughout the year.

“The Student Senate’s work over the summer is essential because it provides us the chance to build a framework to guide us throughout the year,” said President Essien in an email to Chimes. “You may think of the Senate’s annual work as constructing a house and our summer work as the needed blueprint to get us to the end. We build off the past by revisiting our predecessor’s works- mission, vision, and core values. A lot of planning and leadership development occurs over the summer through our cabinet meetings as well as our Senate book club sessions. So, when the academic year begins, we can start work with our best foot forward.”

This focus on personal leadership was highlighted in their book club study of Stephen R. Covey’s “The 7 Habits of Highly Effective People”, which emphasizes a principle-based approach to personal and professional growth, as well as other leadership development opportunities throughout the summer.

In July, the Calvin community was invited to join student senate’s summer book club, which was publicized on Essien’s presidential instagram account. However, the book club was soon after made exclusive to senate members.

“As a cabinet, we reviewed the option of opening the book club session to the entire student body. When the goals of professional development and team cohesiveness for the summer became apparent, we saw it best to limit the invitation to just senate as it was easier to achieve both goals in a smaller group,” Essien said.

“The emphasis on personal leadership was used as an empowerment method that allowed their virtues to shine through so that they can properly serve the student body as well as work with faculty and administration in a professional and polished manner,” said Perumal. “Summer training gave us the confidence in our leadership to really make that possible. I’m looking forward to seeing what we accomplish this year as a result of our summer training.”

On Thursday, Sept. 9 at 5 p.m., student senate will conduct its first public event, a town hall on Commons Lawn in conjunction with the COVID-19 response team to discuss the current mask, vaccine, and testing mandates on Calvin’s campus.