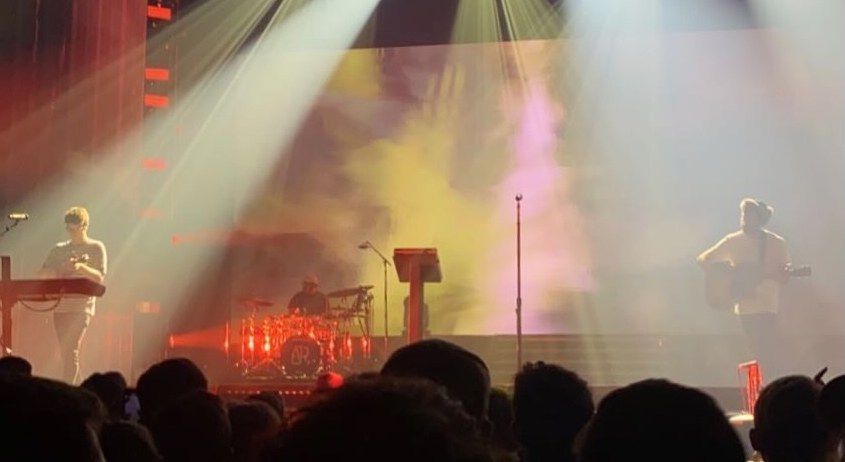 A Sept. 8 AJR concert at the DeltaPlex Arena attracted a flock of Calvin students. The band of brothers performed their “OK Orchestra” album with a few other fan-favorites interspersed throughout. The concert looked and sounded phenomenal, and it seemed to have a theme of collective experience.

The first opening act, Daisy the Great, was an indie pop band that has collaborated on a song with AJR. The two frontwomen sang harmonies to almost all of the words for their songs, creating a wonderful, raw sound that reminded me of Calvin student Adelyn Roush’s duo Adelyn & Ava, who can be found on Spotify. Daisy the Great were quite transparent in terms of nerves and gratitude, making connections with the audience by pointing out that this was the first concert most of us had attended or performed since the pandemic hit. There is no denying that the past 18 months have been quite difficult. Being at this concert highlighted the collectiveness of this experience which has felt so isolating, as well as the collective excitement and yearning for normal, for fun –  and specifically – for live music.

The next opener was an artist named Sasha Alex Sloan. She had an amazing voice and an incredibly calm stage presence. Her vocal style sounded like the soft pop that you would hear on America’s Got Talent. The issue was, all of her songs sounded like that. She was a great singer, but after 45 minutes, there was a lull in the crowd. After over an hour of openers, everyone was ready to finally hear AJR.

When AJR did come on, the energy soared. They opened with their song, “Bummerland,” which solidified the feeling that after the season we’ve all had, “we’re only going up from here.” The sensational Arnetta Johnson, a trumpeter who collaborates with AJR, made her first trumpet appearance on “Three O’Clock Things,” which kept the energy high. The visual effects to this song were impressive and well-rehearsed, as the musicians interacted with the special effects on the screens. The lyrics spoke poignantly of yearnings and anxieties: “Would you go running if you saw the real me? / Maybe you’d love ’em / Yeah, maybe you’d feel me / But I’ll never ask you, no that’s super scary.” This captured a shared excitement as well as a shared expression of the cocktail of loneliness, depression, anxiety, yearning and need for stability that is both a common human experience and a specific presence in Gen Z.

Other songs commented on tangible experiences ranging from losing your socks, to being tempted by sex and drugs, to feeling like someone and no one at the same time. Arnetta Johnson then made a return with a trumpet compilation of famous AJR songs that had the audience enthralled. AJR also brought opener Daisy the Great back out, and they performed “Record Player,” the song on which they collaborated – which was also the focus of a recent TikTok trend.

The remaining acts of the show continued the theme of both yearning and excitement. “World’s Smallest Violin” commented on the need to feel heard and seen in the mediocrity and lack of impact that we sometimes feel our lives have: “The world’s smallest violin / Really needs an audience … / Just let me play my violin for you.” On the other hand, they played hits like “Bang!” that were screamed by every audience member as the arena bounced in unison. They performed “My Play” in which they talk about putting on plays for their parents in the living room as kids and use it as an extended metaphor for what it felt like when their parents got divorced, but they also played “Burn the House Down,” which was the point that everyone who hadn’t already lost their voice finally cracked. They showed their unique songwriting process through a creative way of editing the sounds of knocking on doors, but also talked about emotional topics like Jack’s OCD diagnosis.

Near the end of the show, they performed “Way Less Sad,” which celebrates being past a place of deep hurt while still yearning for a place of deep peace and fulfillment.“I’m A-okay, I’m A-okay / You say it but you just don’t mean it / You’re so insane, you’re so insane / Shut up and just enjoy this feelin’ / … I ain’t happy yet / But I’m way less sad,” they sang. This was a timely sentiment, as this was the first time most audience members attended a concert since the pandemic hit, and it was one of the first times these artists were able to play live music to a full arena. They closed with “OK Overture,” a song styled like an overture in musical theater that contains themes from different songs. It was a show that wrapped itself up well despite no one wanting it to end. The concert as a whole was a collective experience that combined the dissonance of human suffering and joy.