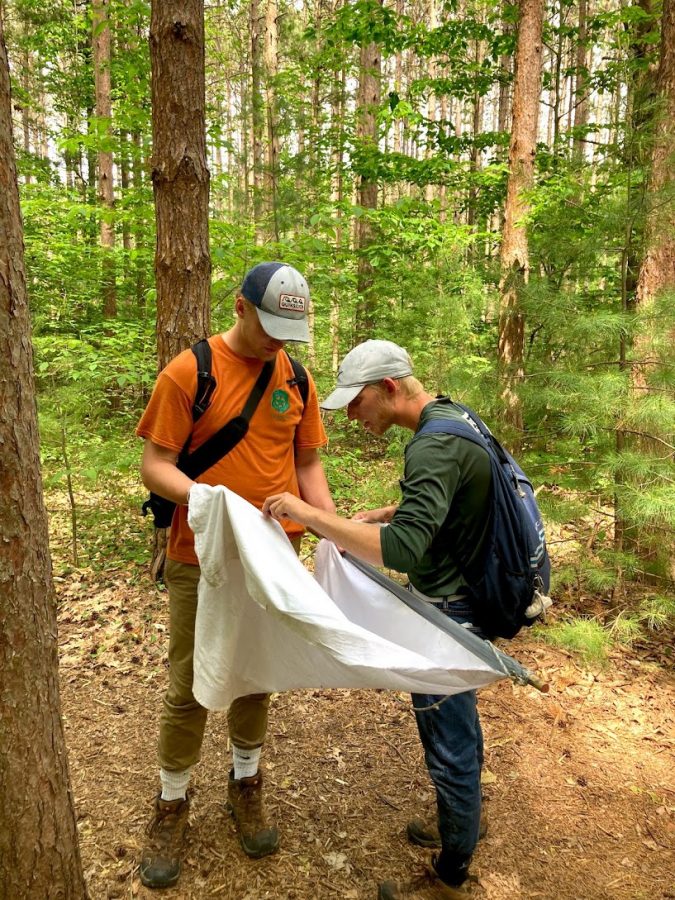 Photo courtesy of Will Miller.

While other students were off soaking up the sun and splashing in the surf this summer, four Calvin students spent their days surrounded by blood-sucking parasites. But their vacation time was not wasted. After weeks of researching Michigan tick population growth and spread, biology professor Will Miller and his team of students collected an estimated 1,000 ticks — almost ten times as many as last year’s 100-150.

“We found about as many ticks as they found all of last summer in one single location in one single day this summer,” Andrew Vander Tuig said. Vander Tuig is a senior environmental health and conservation major who worked on the project over the summer.

The populations aren’t just growing, however; they’re expanding to new locations. According to Miller, tick populations are slowly spreading northward and inland, creeping into new habitats. Thankfully, Calvin’s campus remains relatively unscathed; the research group found only one tick in the Calvin Ecosystem Preserve this summer. But that may not always be the case.

“We are right at the expansion front. Kent County was usually thought of as a low-risk area,” Miller said. “This year, as far as we can tell, we are seeing an increase in the number of established sites.”

In addition to collecting ticks this summer, Miller and his student research assistants began a new process of pathogen tracking.

“We would go and collect [the ticks], identify them and then send them off to New England University. They test them for what diseases they’re carrying,” Vander Tuig said. “Hopefully in a couple months we’ll get some information back as to what diseases are going around West Michigan.”

Meanwhile, as Professor Miller and his students used a square cloth attached to a stick to sweep trails for creepy-crawlies, other labs on campus bustled with students conducting different summer research projects.

In the Baker-Wilstermann lab, nine students worked alongside biology professor Amy Wilstermann and chemistry and biochemistry professor Rachael Baker, researching rare diseases associated with mutations in the BCS1L protein. Wilstermann remarked that her students successfully introduced a mutation that allowed them to breed albino zebrafish.

However, Wilstermann said that the true value of summer research does not lie in the successes of the students, but in their failures.

“One thing that students don’t realize when they come into a scientific research setting is that the way science actually occurs is not how it’s occurring in your labs and classes. We’re working at the edge of understanding. You may hit a dead end and that’s a normal part of the process,” Wilstermann said.

Eight other students had the privilege of working on intracellular research with chemistry and biochemistry professor Laura Westrate, focusing on fluorescent imagery of the endoplasmic reticulum. Chimes spoke with Katherine Koning, a senior biochemistry major who worked in Westrate’s lab previously.

“By understanding cells on a fundamental level, while it might not impact everyone on a day-to-day basis, it is going to benefit everyone as we continue growing our depth of knowledge,” Koning said of the importance of Wilstermann’s project. “We’re all living beings made up of cells.”

Emilia Shokoohi, another senior who worked on the tick project, thoroughly enjoyed her time collecting ticks in the field and echoed Koning’s praise of student research.

“It was a great experience,” Shokoohi said. “If someone is interested in summer research, definitely apply.”

A previous version of this story misattributed the photo credit. Chimes regrets this error.