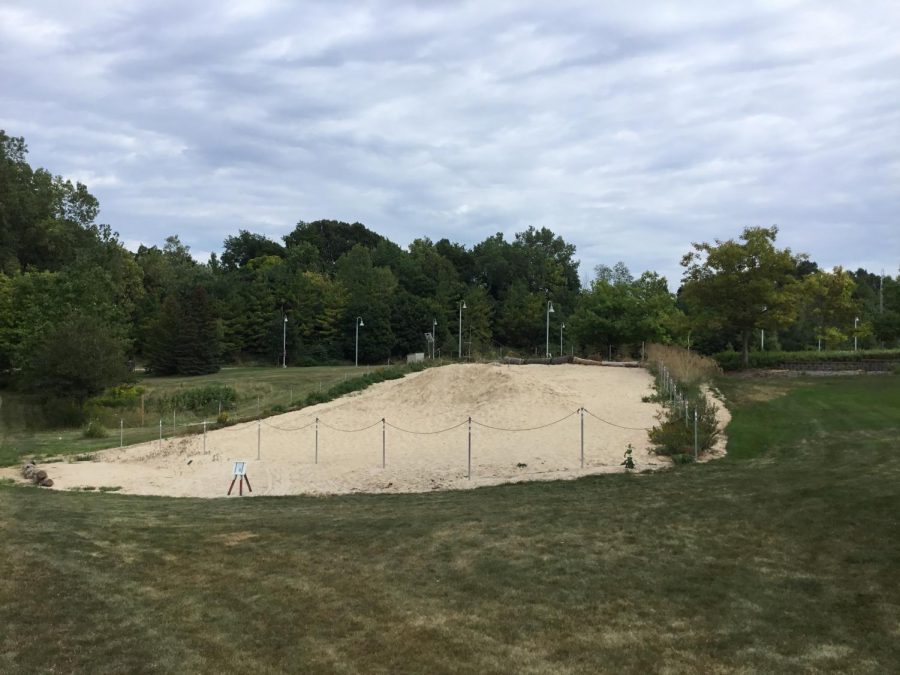 A year after the Perseverance dune was first built, the geo department added more sand to simulate a blowout dune.

The Geology, Geography, and Environmental Studies department has recently renovated the artificial on-campus dune known as Perseverance by adding almost 189 tons of sand. This addition created a blowout dune on top of the original dune, which was first created in August 2020.

Geography professor Deanna van Dijk, who initiated building the Perseverance Dune, told Chimes she is excited for its future and is certain that it is now a permanent feature on campus.

The FYRES class itself will be returning to natural dunes to conduct most of their class activity and research this year. Yet the Perseverance Dune remains a unique asset to the program and other Calvin courses.

The artificial dune serves as an outdoor lab for the FYRES course itself. It allows students to try out methods and prepare for fieldwork in a dune-like environment, according to van Dijk. For example, the students are now able to experiment with actual dune plants collected from Perseverance, instead of substitutes.

Professor Dave Warners of the Biology department gifted the dune plants to Professor van Dijk when the artificial dune was first built. A year ago they would not have been noticeable, but now make up a significant part of the perimeter of the dune.

“I’m pretty amazed too. We put very small plants into the sand, and so what you are seeing … that’s all been growth this year,” van Dijk said.

As an enclosed, more easily controlled environmental lab that simulates real dune conditions, Perseverance allows research that is not viable on Lake Michigan dunes. For example, one student research group deliberately trampled dune plants in order to find out whether they would survive and continue to stabilize the dune surface. Deliberate trampling of dune plants, even for research, would not have been allowed on actual Lake Michigan dunes.

For Professor Dave Warners of the Biology department, the Perseverance Dune has also presented many unique opportunities for teaching and research. This semester, he’ll be using the artificial dune as a lab for his Restoration Ecology class, in which students will work on processing stormwater runoff by using a part of the dune where water flows downhill. Students will formulate their own experimental research projects based on Perseverance Dune and its dune plants, and these projects will be carried on by future students, collecting data over the course of years.

The Calvin Ecosystem Preserve, which has officially integrated the dune into the preserve, will also be using Perseverance Dune for public outreach and educational demonstrations.