Full slate of intramurals return after pause for COVID 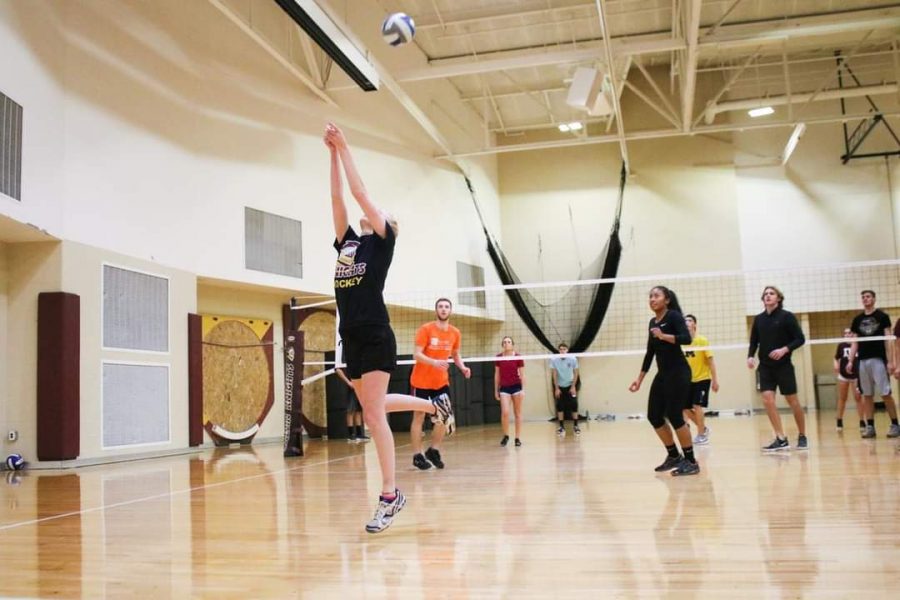 Calvin students will be back to playing intramurals like volleyball this fall after last year's break.

Intramural sports are slated to fully return to Calvin’s campus this fall. Given the student body’s high vaccination rates (78.78 percent of those living on campus), the Intramurals Office is confident that sports like basketball and soccer, which were put on hold last year, can resume full-fledged operation. In addition to the usual options, flag football will be joining the list of intramural sports being offered this semester.

The intramural season will begin Sept. 7 with a kick-off tournament that will feature 3v3 basketball on Tuesday, 6v6 volleyball on Wednesday, yard games on Thursday and Wiffle ball on Friday. The basketball and volleyball games will take place in Hoogenboom gym from 7 p.m. to 8 p.m. The yard games and the Wiffle ball tournament will be held on Commons Lawn from 4 p.m. to 6 p.m.

According to Intramurals Student Coordinator Grace Steenwyk, most games will look quite similar to the way things were before the pandemic. Masks will not be required for outdoor games but will remain mandated during indoor games due to lack of airflow.

“We’re looking forward to more people coming out,” Steenwyk said. “Last year it was really hard to find community and get to know people. I’m hoping intramurals can be a place for that.” According to Steenwyk, intramurals attracted hundreds of participants before the pandemic.

Junior Kade Bouwer admitted that although intramurals have become an afterthought with everything that’s happened last year, “If someone came up to me and asked me like, ‘Would you want to play?’ I probably would.” He said that the return of intramurals is especially a good opportunity for freshmen and sophomores on campus this year to “friend-network.”

Amy Piescer, a senior and intramural volleyball regular, said she’s committed to playing with her teammates in her final year at Calvin. “I have specific relationships I’ve built, especially through volleyball,” Amy said. “On the day-to-day, it’s not like I see them, so volleyball is the time that I get to spend time with them.” She agreed that on-campus morale was a lot lower last year, but said that her team’s dynamic and her personal need to stay active kept her motivated enough to participate.

Students can sign up for intramural teams now at https://calvin.edu/athletics/intramurals/ before the Sept. 10 deadline, as well as receive the full season’s schedule. Teams can expect to play a game twice each week.

There is no sign-up required for students who want to participate in the kickoff tournament. Students only have to show up at the appropriate venue.

The Intramurals Office is also looking for new recruits this semester. Those interested in joining the team can learn more at https://calvin.edu/athletics/intramurals/student-employment/.