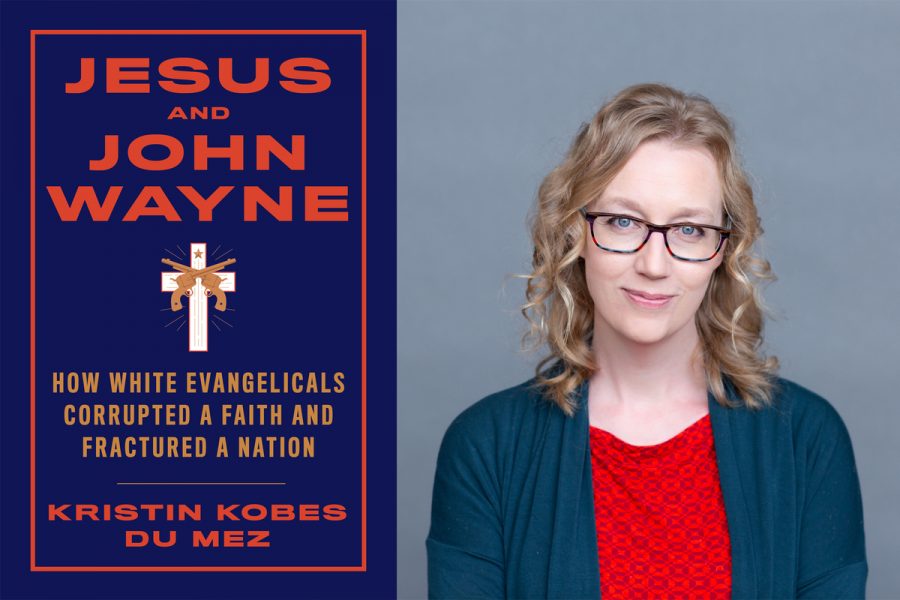 Professor Kristin Kobes Du Mez has another accomplishment to add to her resume: she is now a New York Times bestselling author.

Du Mez’s 2020 book “Jesus and John Wayne” has landed on one of the most prestigious book lists in the nation almost a year after its debut, reaching #4 on the Paperback Nonfiction Books category.

Making the New York Times bestsellers list is a first for Du Mez, a history and gender studies professor, as well as an accomplishment for the Calvin community, as it marks the first time a member of the Calvin faculty has made the list.

“We are tremendously proud of our colleague Kristin. It’s very rare for an academic book to reach the New York Times bestseller list, so it’s definitely a remarkable achievement,” said Kate van Liere, chair of the history department. “Typically the writers who make the nonfiction bestseller list are celebrities or journalists, not academic authors. On the other hand, it’s not surprising that Jesus and John Wayne should turn out to be one of the few history books that attains this level of popularity. Kristin writes beautifully and very accessibly…She has done fabulous research.”

“It’s still a new thing…It’s kind of amazing. I don’t really know what to say.” said Du Mez, who was informed of her bestseller status on Wednesday, June 16.

The journey to “Jesus and John Wayne” began nearly 15 years ago, with Du Mez starting her research in 2005 before temporarily putting it on hold.

She resumed her research in 2016, digging through “difficult sources” with the help of three student research assistants.

“It was incredibly hard. What sustained me was my team of student researchers, and they read a lot of those sources too…to do this in community and work on this project together really was amazing,” said Du Mez. “I have to give them a huge shoutout”.

After an 18-month writing period, “Jesus and John Wayne” was released in May of 2020- coinciding with a rise in interest in the study of Christian nationalism during the Trump administration’s final months.

The critically acclaimed book received both national and international media coverage from outlets ranging from NPR to Christianity Today at the time of its release. Following the events of the January 6th capitol riots, media attention soared and books flew off the shelves.

According to Du Mez, the enthusiasm from readers across the country led to its inclusion on the New York Times bestsellers list. Only a hardcover edition was available when it was released in 2020,  but the release of a paperback edition in 2021 resulted in sales that helped propel “Jesus and John Wayne” to the list.

A broad range of readers have delved into “Jesus and John Wayne,” including many Calvin students.

“This book truly helped empower me as a Christian progressive to negate some narratives and ideas that are sold as de facto; I just didn’t know they were political/social narratives until now,” said Karsten Rees, a senior studying international relations.

Students like Sydney Klimek, a junior majoring in film and media, hope that the book’s bestseller status means it is helping others on their own faith journeys.

“I grew up so embedded in white, right-wing evangelical culture that I never realized that it was a culture in itself…” said Klimek. “Jesus and John Wayne not only made me more aware of this culture but also helped to strengthen my faith as a Christian. I’m happy that the book made it onto the bestseller list, and I hope that it helps people in the way it helped me.”