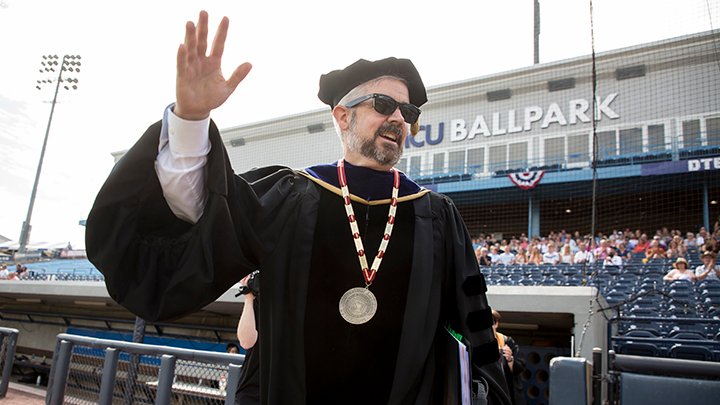 University President Michael Le Roy announced that he will not be renewing his contract following the 2021-22 school year.

The coming school year will be University President Michael Le Roy’s last, he announced on Thursday.

Le Roy, who has served as Calvin’s president since 2011, said he does not plan to renew his contract beyond the 2021-22 school year, according to campus-wide emails from university officials.

He called the decision the result of prayerful consideration with his wife, Andrea, and attributed it to a desire to be closer to family in the Northwest.

“I am grateful to all of you—the members of the board of trustees, the cabinet team, the faculty, staff, students, donors, and friends of Calvin University—for your prayerful support of Andrea and me during our tenure here,” Le Roy wrote. “The relationships have been a gift to us, and we will treasure these friendships for years to come. You all have made us better followers of Jesus than we ever dreamed we could be.”

Le Roy acknowledged that the coming year will require his “diligent focus,” and promised nothing less in his announcement. His two requests to the Calvin community were for an understanding that the decision to depart was not made out of dissatisfaction with the university and that the community wait to celebrate and remember with him until the academic year has passed.

Le Roy is not the only university official leaving in the coming year.

Calvin’s vice president for finance, Jim English, will depart before the school year begins, following less than two years in the position. English will move to his new role as Chief Financial Officer of Kalamazoo Public Schools at the end of June 2021.

In August 2020, Provost Cheryl Brandsen announced plans to retire by the end of June. She will be replaced by Noah Toly, executive director of the Center for Urban Engagement at Wheaton College. Brandsen has served as Calvin’s provost since 2014.

“[Le Roy] values and delights in the teaching and scholarly work of faculty, and he loves interacting with students. Michael is a deeply wise leader who loves Calvin and loves God. Of course, there have been hard days, but I cannot imagine anyone more equipped to lead through all this than Michael,” Brandsen said of the president in a press release.

In his time at Calvin, Le Roy has overseen the transition from college to university, the creation of the Calvin Prison Initiative, the founding of a school of business, and budget management after the 2008 financial crisis and during the COVID-19 pandemic.

The Board of Trustees has appointed Mary Tuuk Kuras, the board’s vice chair, as head of the search committee for Le Roy’s replacement.

Three additional trustees, three faculty, two administrators, one alumni representative, one student, one representative of the Christian Reformed Church in North America and three at- large members will soon join Kuras on the committee, according to an email from the board.

“Michael will be remembered for his deep love and care for students and his passion for the mission of Calvin. His thoughtful and godly leadership served as a model of wisdom and grace  for all that he touched,” said Bruce Los, chair of the board.