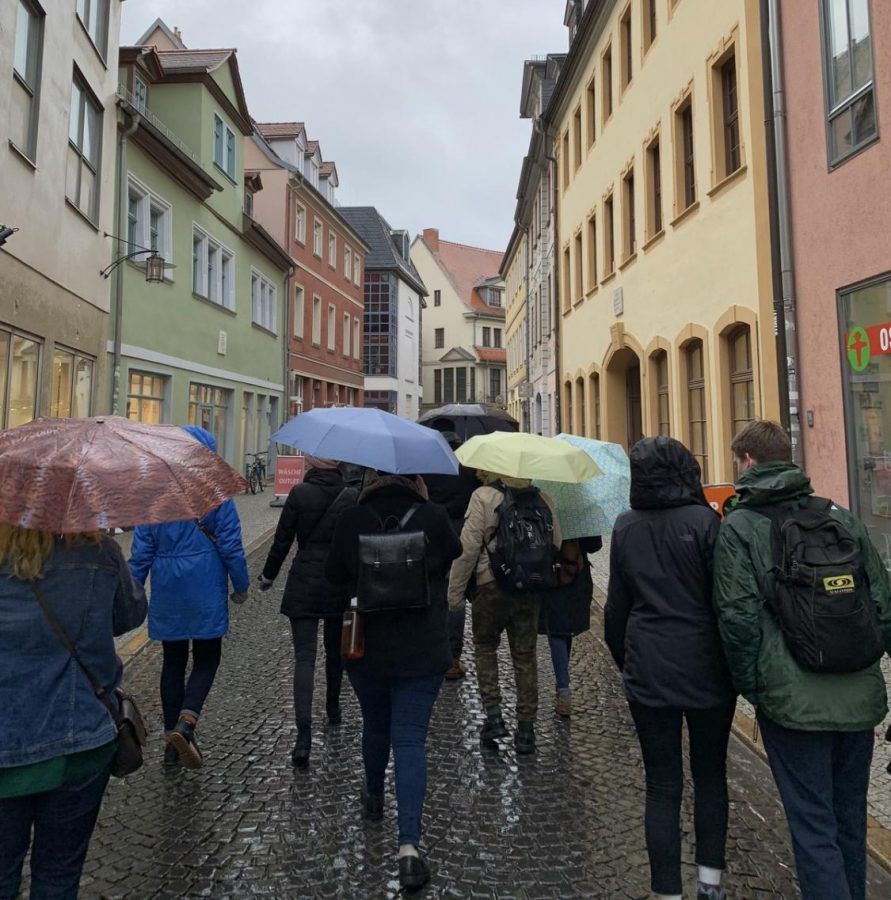 Students in Calvin's German program enjoy a trip abroad. The German major was among those cut by university officials.

After reviewing recommendations from the Academic Program Review, university officials have decided to cut five major programs, seven minors and its in-house facilities management, according to a faculty-wide email from University President Michael Le Roy.

As a result, two members of faculty were laid off, and the positions of 12 retiring or resigning faculty will not be refilled. The university is also replacing its facilities management staff with contracted labor by June 27.

In combination with last summer’s cuts, the university has now eliminated approximately half of its previously offered world language majors and minors. According to world language faculty, Greek, German, Dutch and Latin courses were among the earliest to ever be offered at Calvin.

Professor Herman De Vries said Calvin’s Dutch program has been active since 1915, outdating any in the country, with the exception of Columbia University’s. “The reality of what we have now lost—with one fewer person, and with reduced offerings in Dutch and German—is, right now, difficult and discouraging,” De Vries told Chimes.

“I completely understand why Calvin made this decision, and it makes good financial sense, but I still believe it was the wrong one” said junior Adrienne Ora, who went from being a student of three departments to one overnight.

Professors David Noe, of the classics department, and Corey Roberts, of the German department, were both let go from the university. The Handbook for Teaching Faculty allows for tenured professors to be laid off if the programs in which they teach are eliminated.

The eliminated programs will continue to offer required courses to existing majors and minors on a limited basis, but the affected programs will not be offered to incoming students.
“The provost and deans are working with affected programs and faculty to re-imagine how core elements of those programs can continue at Calvin,” Le Roy said. Opportunities for studying Dutch and German abroad will continue, as will the German minor. Dutch and Chinese offerings will be limited to core requirements.

Many current and former faculty members were outraged and saddened by the elimination of programs so closely linked to Calvin’s historical mission and reputation.

“It’s a major hit to Calvin’s reputation, no matter how much the school trumpets its commitment to its liberal arts values and mission,” said Mark Williams, a professor emeritus of classics.

Le Roy’s email attributed the cuts to challenges in higher education exacerbated by COVID-19, declining numbers of high school graduates predicted over the next decade, and a generally decreasing demand for universities.

“I understand the concern or angst many of you in the Calvin family must feel,” Le Roy wrote. “As we move into this new season, I believe these changes set us on a more solid footing and position us to better provide the educational experience our students deserve. We do not anticipate any further personnel cuts or program changes this coming fiscal year.”

University officials also made changes to staff and faculty compensation. Faculty wages, which were frozen last summer, will increase by a step this year. Staff wages will remain frozen.

Employer retirement contributions will resume at 2.5 percent of faculty salaries and 4 percent for staff. Healthcare benefits will decrease with “modest” increases in premiums and the elimination of HSA contributions.

The university’s facilities management team will be replaced by a contract with National Management Resources Corporation, which has agreed to hire all of Calvin’s current facilities management staff. According to Le Roy, NMRC has offered these employees benefits packages comparable to what Calvin provides.

The facilities department will continue to employ students throughout the summer, but student positions in facilities will not be offered in the future.

It is unclear if the university will continue to offer educational benefits to the families of facilities employees who transfer to NMRC.

APR recommendations for programs and faculty to be cut took into consideration the number of graduates from each program, admitted students’ interest levels, university quality and the effect of cuts on the student body. According to faculty members familiar with the decisions, programs were not eliminated because of their quality but rather because of the financial strain they placed on the university.

“People won’t be fooled by the rhetoric; the institution is seriously diminished, and it’s really just the continuation of a downward trajectory that began around 2015.  It would have been more honest to say simply, Classics and these other disciplines are luxuries that we can’t afford anymore,” Williams said.

The former classics professor is not alone in his belief that the recent cuts erode from the university’s purpose.

Dr. Larry Herzberg, who recently retired, built the university’s Asian languages program from the ground up starting in 1984, eventually offering four years of both Chinese and Japanese. At its peak, the program included 180 students in courses, 65 majors, and 4 faculty. “Calvin became the premiere Christian undergraduate college in the nation for Asian language instruction,” Herzberg told Chimes.

Multiple current and former faculty members expressed their sympathies for incoming students who had planned to study in programs that no longer exist. To Herzberg, Calvin is undermining its own mission.

“It will be more difficult for our university to fulfill its stated goal of being a global university which prepares our students to better interact with people of different nations and cultures,” he said.

Junior Lauren Henderson, who is pursuing a minor in astronomy, expressed her own concerns as a student. “I think many of the cuts do not reflect Calvin’s mission to provide a strong liberal arts education,” she said. “Cutting the astronomy minor undermines Calvin’s commitment to quality science programs and research. Calvin is negating all the reasons my peers and I came to this school in the first place.”