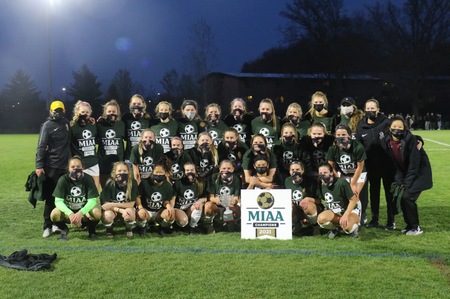 This past weekend the Calvin women’s soccer team won the MIAA tournament for the first time since 2015, defeating Kalamazoo 3-0 in the final. With this victory, they finished the shortened spring season 8-0.

This was their first tournament championship under head coach Emily Ottenhoff, who expressed her elation after coming out victorious following such a peculiar season.

“I’ll be honest, I probably felt a little relief; winning is hard!  I also felt excited for our women, especially our senior group,” Ottenhoff said. “This isn’t the senior season they or any of us expected but I have to imagine it felt satisfying for them to end their careers with a win.”

The team, like other sports teams competing during the pandemic, had to overcome many obstacles to succeed and stay focused, and leadership was crucial in accomplishing this. Communication was key. According to Ottenhoff, “We just talked about sticking together and being flexible while trying to grow together as a group on and off the field.  We knew we would have to be able to quite literally take things day by day with COVID in the mix.”

The  seniors were a huge catalyst for the success of the team on and off the field. Jessica Paulson and Karley Babcock started every game for the knights and also pitched in two goals a piece on the season. “I am really happy for all of our seniors,” Ostenhoff said, “We pushed through a tough season last year during some transition.  They were focused on doing what they could to leave the program in a better place for those who follow them.  I’m thankful for their commitment to the program to help make this the best place to play soccer.”

This year they found success because they “played each game in the moment and tried to take advantage of the opportunities in the game. We agreed we were going to be bold and go for it knowing that’s what we could control,” Ottenhoff said, and they will look to carry this attitude toward more championships in the years to come.