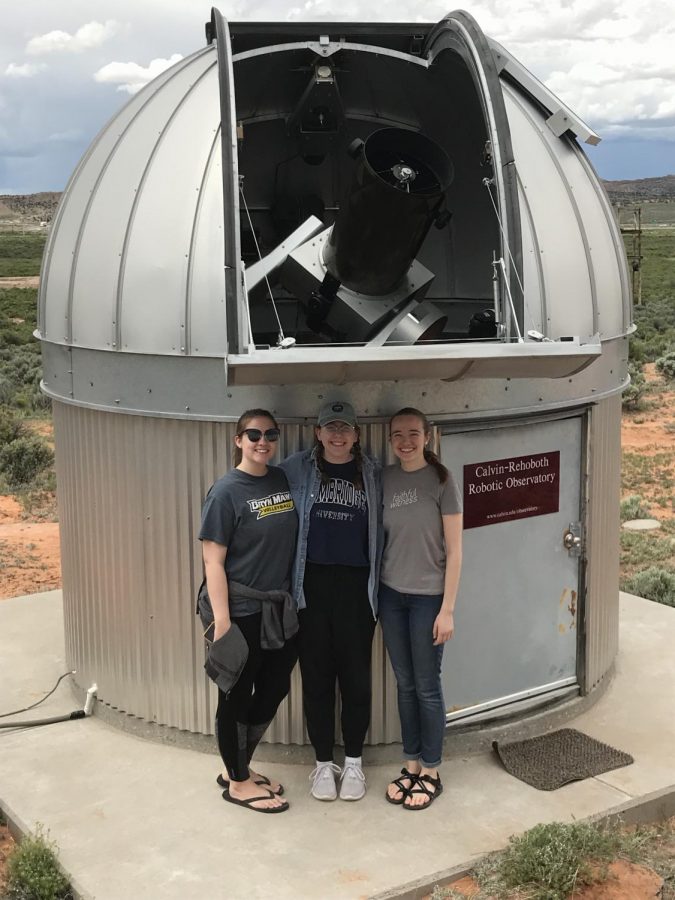 Henderson with her summer 2019 research group at a telescope in Rehoboth, NM.

In Calvin’s physics department, which has an all-male faculty, junior Lauren Henderson is a rarity. “Typically, my classes have about 25 percent or fewer women,” Henderson told Chimes. “I have never had a female professor for a physics or math class.”

When choosing a college, Henderson took gender representation into account, and meeting another woman physics major helped Henderson decide on Calvin. “Knowing that I would not be the only woman in the department was important to me – it made me feel like I wouldn’t be alone,” Henderson said.

Biochemistry major Seanna Johnson said just four of her 27 STEM courses at Calvin have been taught by women, with three of those taught by the same professor.

Chemistry and biochemistry Professor Laura Westrate told Chimes her undergrad classes were pretty balanced in terms of gender, “but the percentage of women colleagues decreased as I advanced in my training through graduate school and then my post-doctoral fellowship.”

According to Westrate, the lack of women pursuing higher education in chemistry fields is due to a combination of competing or evolving interests, difficulty in managing science careers while also serving as primary caregivers and a lack of women role models.

Gender imbalances in higher education aren’t unique to STEM. Dr. Rebecca Konyndyk DeYoung, a philosophy professor, said that, although all her professors in undergrad were supportive, she never had the opportunity to be taught by a female professor in her field. Her grad school cohort consisted of seven men and one woman.

According to DeYoung, her male peers received more and better mentorship, due to their attitudes of entitlement and her professors’ assumptions that, as a woman, she wouldn’t have trouble finding a job.

Being a woman in a male-dominated field puts pressure on women both to represent other women well and to stand out academically. “I feel very conscious of moments when I’m the only woman in the class or in a group of other physics majors, feeling like I need to be able to speak up when I know nobody else there will, or feeling as if I need to be exemplary to be accepted as a physics student along with my male counterparts,” Henderson said.

“It’s having to work just as hard as male classmates for class but ten times as hard to deal with all the emotional and psychological consequences of being in a male-is-the-standard field,” Johnson said.

In the field of philosophy, more women pursuing philosophy degrees and more men working to change conversational norms are signs of progress. But obstacles remain due to the ways in which women and girls are enculturated to conform to a set of norms that is sometimes at odds with the skills required of philosophers, such as the confidence to stand one’s ground and ask challenging questions.

“I think women (especially when they are younger) are not taught to do this,” DeYoung said, “or, if they do, they are not always socially rewarded for it (it gets coded ‘aggressive’ or ‘pushy’ or worse; religious cultures tend to expect docility and ‘niceness’). They are not sent the message that their ideas matter and their voices are worth listening to. They are not heard or paid attention to or are excluded from discussions, or their reasons are not taken seriously.”

Interactions with male peers in physics are mixed, according to Henderson, but professors and most peers have been supportive. “I have loved studying astronomy at Calvin. There are great research opportunities in astronomy here, and the professors all genuinely care about the success of their students.” Henderson said. “It’s been challenging to be in a historically (and contemporarily) male-dominated field, but I have had lots of opportunities to grow into a career in science at Calvin.”

Johnson attributed most negative interactions in her department to male peers. “I often felt invisible and angry for the way they treated women in my class, including the professor,” Johnson said, “They would ask questions that seemed to question the intelligence of our professor, abruptly and verbally correct her minor writing errors in class, and leave out women students in group discussions.”

As a TA in Organic Chemistry Labs, Johnson again faced sexism from male students. “There have been harsh instances where, by and large, male students chastise me about grading, and at times accusing me of losing their lab reports when they didn’t turn them in.”

According to DeYoung, “many women need to build their confidence back up in college, because their social and religious enculturation and environment tends to subtly erode it and/or discount their voices.”

Breaking the cycle, building a new one

Gender imbalances are perpetuated by “a pattern of missed opportunities,” according to DeYoung. These missed opportunities include “failures to encourage and normalize participation and listen to women’s voices and respect their points of view, failures to include women in various conversations and circles of power (vs. the already established default networks of men), and failures to notice women’s potential and support and mentor them.”

Westrate also emphasised the power of good mentorship. “I was lucky that I had mentors (both male and female) throughout my training who focused on investing in me and my development as a scientist.  They came alongside and provided the affirmation and support I needed to decide for myself that this was the career I wanted.”

“What’s been great about being in my department is the mentorship I have found in several professors. It has been vital to my success and growth as both an aspiring chemist and as a person.” Johnson said about Chemistry/Biochemistry, “What has been most difficult is the lack of discussion and change on how to make our department a more inviting place to all genders.”

Lay-offs and cuts are often devastating to attempts to diversify departments, as professors who don’t fit the mold are often younger and more recently hired, and thus the first to go.

DeYoung was only the second tenure-track woman to be hired in Calvin’s philosophy department, with the first being hired just a year prior. Until the late 1990s, the department had not seen a female faculty member.

Now, she’s the only woman professor in the philosophy department. “Historically it helped normalize expectations to have three female professors in the department,” DeYoung said. “But my male colleagues are also intentional recruiters and encouragers of their female students.”

Joining Calvin’s department of chemistry and biochemistry, Westrate was one of four women out of 13 total faculty. Her classes tend to be about 40-50 percent women, but she hopes to see more of these women go on to pursue STEM in post-graduate studies.

The support of professors like Westrate and DeYoung is helping channel more women into male-dominated fields and making these fields more welcoming for the next generation of women.

“There is an exhaustion that comes with always swimming upstream against people’s default assumptions about who really counts as a philosopher, and a successful one,” DeYoung told Chimes. “I think this really drives my own sense of vocation in philosophy—to make my own classroom better than that, and I know my colleagues in the department share that vision to create spaces where everyone in our classes can be valued and flourish, and have the confidence to explore and grow.”