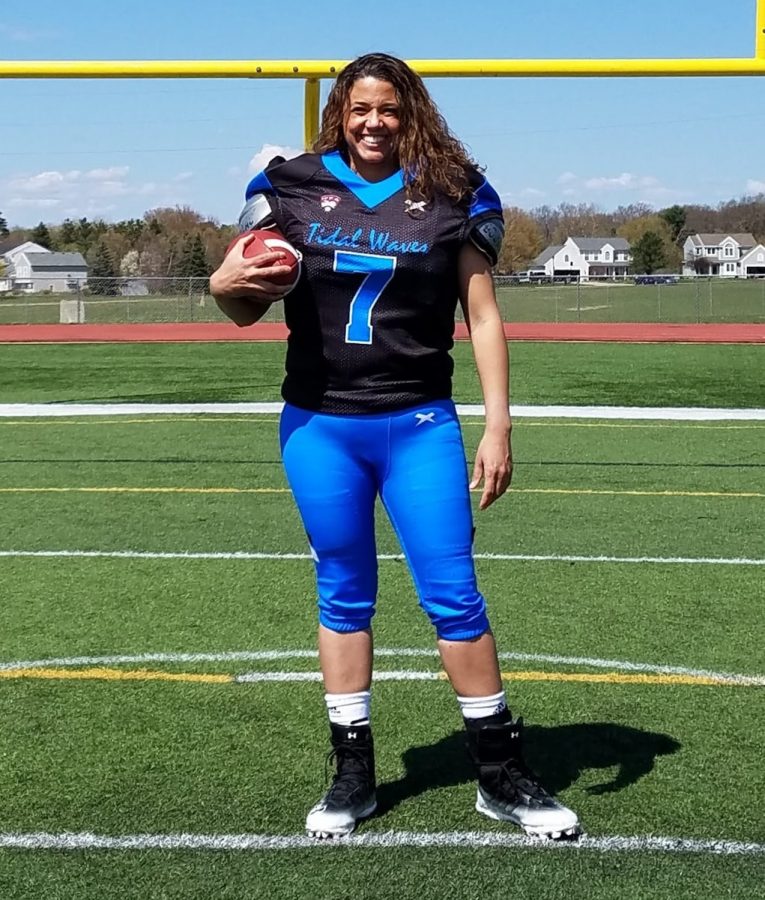 Marr is a semi-professional tackle football player for the Grand Rapids Tidal Waves.

While visiting a nearby pride festival in 2019, Calvin sociology and gender studies professor Elisha Marr was flagged down by a woman behind one of the booths and asked a strange question: “how would you like to play football?”

At first, Marr was hesitant. She’d enjoyed playing flag football with her residence hall in college, but now she was “mom old.” However, the woman quickly assuaged her fears, telling her that there were many older women who were moms on the Grand Rapids Tidal Waves, the local Women’s Football Alliance (WFA) team.

Marr gave them her contact information, and her journey to becoming a semi-professional tackle football player officially began. That summer, she attended the team’s three preseason mini-camps.

She admitted that joining and participating in the Tidal Waves was unlike anything she’d ever done before; it was a “real risk.” But it paid off. Thanks to the team’s patient and rigorous training, she’s made a lot of progress. In fact, she believes that she’s never been more fit before in her life.

Prior to joining the Tidal Waves, Marr usually went to women’s pilates classes and running groups to stay in shape. Marr enjoyed the experience of exercising for its own sake. Since the pilates and running women were mainly focused on losing weight and improving their body image, she had a hard time connecting with them. The football women were different.

“I can honestly say the football people are my people,” she said. “I just feel completely at home. I’m a feminist and I like strong women…these women are not afraid to be strong and they’re body-positive. I like being with women who…aren’t trying to improve themselves for men. They’re my people in the sense that they’re fierce and they’re survivors. Some of them are pretty nontraditional women and they’ve had to put up with a lot because of society, and this is the place where they have affirmation.”

Throughout her life, Marr has been interested and involved in many historically male-dominated spaces such as percussion, information technology and punk rap. This has caused her some degree of shame and discomfort. However, now Marr is able to bond with the other football women over this struggle.

“Football’s unique in the sense that with every other sport there is a women’s version of it but with football there isn’t,” she said. “We’re hoping to increase [awareness] about it.”

Calvin students interested in supporting the team can come to the Tidal Waves’s first game on Saturday, May 1 at 5 pm at Northview High School. Tickets cost $10. Marr encouraged female Calvin students to consider joining the team.