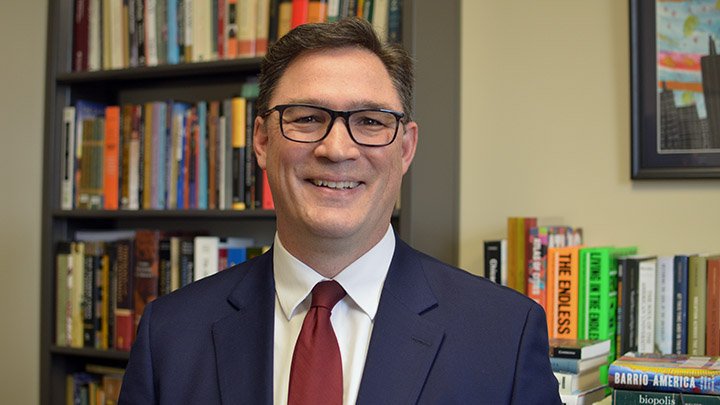 Toly is replacing Cheryl Brandsen as provost this summer.

This interview has been edited for length and clarity.

Chimes: What are you reading right now?

Toly: My reading slowed down a little bit during the interview process – or, better yet, I kept busy with lots and lots of reading about Calvin – but right now I’m reading a biography of Ida B. Wells and I’m teaching a course on environmental politics and Christian ethics, and so that has me rereading Willis Jenkins’ book, The Future of Ethics. And I’ve got a large stack of books that I’m looking forward to getting to when the semester ends.

Chimes: Calvin Comms has mentioned a lot that Calvin was on your shortlist – this provost position. Why was this position on your list?

Toly: Well, I won’t say what other positions were on the list, but it was a very, very short list, as I’ve mentioned before. But when that confidant – that unnamed confidant in the press release – suggested this to me, he also gave me advice to think about places where I already had relationships, where I wasn’t starting from scratch. And I’m not starting from scratch at Calvin. I know I have a lot to learn. I know I’ll need to get used to a lot of things that are particular to Calvin. And I would love to learn things like, “What’s funny at Calvin?”

And then on top of that, of course I had high regard for Calvin as an institution – its history of academic excellence, emphasis on teaching, and Reformed identity, and its bold “Vision 2030,” which I think reflects the values of an institution that is not built just for itself, but knows that it exists for the church and the world.

Chimes: So you talked about Calvin’s vision statement. Calvin identifies itself as a liberal arts university. And I’d like to hear from you, what kind of commitments do you think a university has to have in order to call itself “liberal arts?” And how do you plan on helping the university live out those commitments?

Toly: The first thing I would say is that “liberal arts university” is a tough needle to thread. And I think it’s important to acknowledge up front that there is a perception, at least, among some, that you can’t be a liberal arts institution and a university at the same time.

Chimes: Now Calvin also uses this identifier of being Reformed, and you mentioned that a little bit in your answer to my second question. What does it mean to be Reformed? And how does this identity make Calvin a different place than say, a Wheaton or a “small-e” evangelical university or college?

Toly: One of the things that would differentiate a Reformed university from a “small-e” evangelical school is its ability to draw from the depths of the Reformed tradition, and to do so unabashedly, in order to explore the most important questions about what kind of organization we want to be, what kind of community we want to be. You can see this reflected in Calvin’s commitments to diversity, for example. The depth with which it draws upon those Reformed traditions to make those commitments is really impressive, and that’s an approach that isn’t available to schools that are broadly evangelical – at least not in the same way. Those schools have to formulate their identities and commitments in ways that reflect much greater breadth.

I could go on and on about Reformed theology and [what] that might mean to an institution. You have these giant building blocks in the Reformed tradition that are shared across the various Reformed streams. These include sovereignty, covenant, kingdom. But you also have tendencies in the Reformed tradition. These include the tendency to be fearlessly rangy in the sources from which we will draw, the tendency to preach the whole counsel of God – not just its content, but also its mood or its key.

Chimes: Higher education is in a tough spot right now. There are declining birth rates, denominational loyalty is on the decline, and high COVID costs have hurt Calvin’s revenue and shrunk the student body. How should a school like Calvin react to these trends?

Toly: There are several challenges facing higher education, as you mentioned, and there are obviously steps of practical import and concrete action that are going to matter along the way, whether we’re talking about demographic changes in 2025-2026 and beyond or any other issue, like unsustainable, rising discount rates. That’s a very concrete issue with some very technical background you have to understand in order to get a handle on it.

But one of the things that all of these issues have in common is that they’re best addressed from a position of commitment to the institution’s historic identity. There are a lot of schools out there that are scrambling to pick an identity. There are a lot of schools out there that, every time they change a president, change their identity. One of the advantages that Christian colleges and universities have is that a defining feature of their identity is set, it’s enduring, it’s reflected in their confessional commitments. And Calvin has this in an even more particular way with its Reformed identity. So it’s really important that it continues – no matter how it leans into these issues otherwise – to lean into that Reformed identity.

Chimes: Especially since last summer, predominantly white institutions like Calvin have faced calls to become more inclusive campuses for BIPOC – staff, faculty, and students. As provost, how do you plan to further diversity and inclusion efforts? How has your past work shaped you?

Toly: Well, I’ll start with the second question you asked: how has my past work shaped me in this regard. I am grateful that for fifteen years, I’ve held a position where diversity, equity, and inclusion – or as we now say at Wheaton, diversity, inclusion, justice, and unity – haven’t been just occasional matters. They’re not matters that we take up when we join a certain committee and drop when we roll off that committee. The work that I’ve been doing has required me to focus on diversity, equity, and inclusion every single semester, every single week, almost every single day.

When it comes to how to move forward, I have a lot to learn about what Calvin has done already and exactly where things stand. I know that we need to continue doing work to diversify the faculty at Calvin, and I’ll look forward to doing that as opportunities present themselves. That’s harder to do when you have resource-constrained years with less hiring, and easier the more hiring you have to do. And I look forward to working with Dr. Lloyd-Paige, especially, to understand Calvin’s commitment to inclusive excellence and how that’s working out across the university to promote a subjective sense of belonging and capability for everyone who’s part of the Calvin community.

Toly: I would just like to add that I’m very excited to join the Calvin community, to be part of its mission. And I look forward to getting to know everybody there really soon.