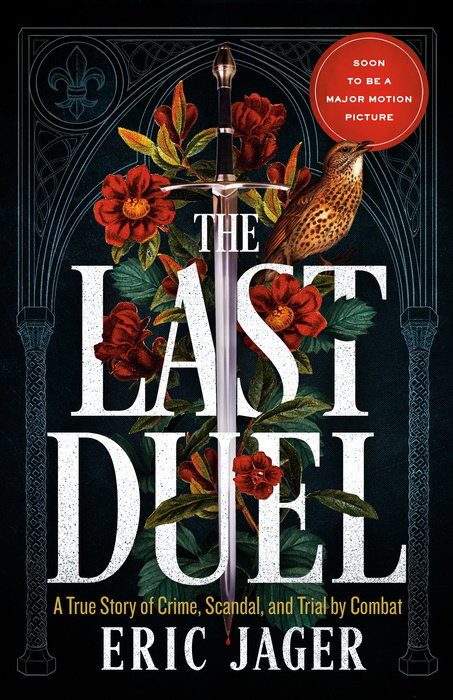 The author of the Last Duel graduated from Calvin in 1979.

You may not have heard about “The Last Duel” yet, but you certainly will. Directed by Ridley Scott of “Blade Runner” and “The Martian” fame, the film stars Matt Damon and Adam Driver as two Frenchmen who fight to the death in the country’s final trial by combat.

What you might not realize, however, is that the film is based on a book, “The Last Duel: A True Story of Trial by Combat in Medieval France,” by Calvin alumnus Eric Jager.

Jager graduated from Calvin in 1979 with a B.A. in English and teaches medieval literature at UCLA. After publishing two scholarly books, Jager turned his attention toward more general audiences, seeking to write a book that would appeal to people outside of academia.

His subject: the compelling true story of a trial by combat in 14th century France.

The trial in question was sparked by noblewoman Marguerite de Carrouges’ accusation of rape against Jacques Le Gris, a squire. After an initial verdict was called in Le Gris’ favor, Marguerite’s husband Sir Jean de Carrouges called for a trial by combat to fight for her honor. Although Carrouges won the duel, “proving” Le Gris’ guilt, many historians have claimed Marguerite’s accusation was a case of mistaken identity.

After reading primary sources from the time, Jager began to doubt this traditional historical view. This was part of what prompted him to write the book. “I found her account very credible,” said Jager, “… I thought historians hadn’t given Marguerite a full and fair hearing, and I wanted to correct the balance.”

With a book so entrenched in historical details and complex legal proceedings, one might think the hardest part of writing it would be the research. Although this aspect took time, Jager said the bigger challenge was framing it all within a vivid narrative with compelling characters, plot, and setting. He had plenty of experience carefully mulling over sources, garnered over years of academic work, but he had never written something for a more general audience.

“The story had been fossilized over the centuries in many layers of French and Latin,” Jager explained, “the hard part was bringing it back to life for today’s reader, who might know little to nothing of the Middle Ages.”

Since its release in 2004, the book has been optioned by several directors, including Martin Scorsese. Ridley Scott’s adaptation was announced in 2019, and Jager served as a script consultant for the project. Jager spoke with screenwriters Matt Damon and Ben Affleck over lunch, and they shared with him their general story outline.

“I was thrilled by the echoes of Kurosawa’s classic film ‘Rashomon,’ which had also inspired my book,” said Jager.

Although he did not serve as a screenwriter on the film, Jager did suggest tweaks to the dialogue and overarching story. “I urged the writers to replace the Latinate word ‘district’ with an English word of Norman origin, ‘domain,’ a more feudal and authentic term,” Jager explained, “People will hardly notice the word in the film … but subconsciously that word will affect them differently.”

When asked what his favorite part of writing the book was, Jager spoke of his trip to France near the end of his writing process. Jager and his wife, Peg, spent a month in Paris exploring the real-world locations in which his story took place, as well as reading through archival documents. A few years earlier, the two had taken a trip to Normandy and walked through the very town where the crime took place. The trip gave Jager a better feel for the environment in which his book took place.

“Waking up early, still jet-lagged, and slipping on a warm coat to step outside and watch the sun rise over a cold and misty landscape, I could easily imagine that I had stepped back in time some six centuries.”

That wasn’t the only thing Jager did in his pursuit of authenticity; he also took fencing lessons to get a feel for the dynamics of sword fighting.

Following the success of “The Last Duel,” Jager has continued to write “true crime” historical novels. His 2014 release “Blood Royal: A True Tale of Crime and Detection in Medieval Paris” follows the murder of Louis I, Duke of Orléans, as investigated by Guillaume de Tignonville, proclaimed as ‘one of history’s first detectives.’

His current project, “Duke John’s Skull: The Murder that Made the Hundred Years’ War,” will be about the titular French lord whose 1419 assassination enabled the conquering of France by Henry V. The book will cover the details of the murder, its effects on France and the controversies that followed.

“The Last Duel: A True Story of Trial by Combat in Medieval France” is available at independent bookstores and local libraries around the country.