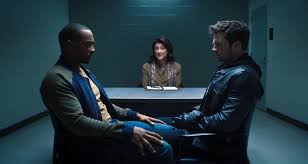 "The Falcon and the Winter Soldier” has broken Disney+ streaming records.

Now more than halfway through its six episode run, Disney’s second Marvel Cinematic Universe mini-series, “The Falcon and the Winter Soldier” has broken Disney+ streaming records and achieved high ratings on Rotten Tomatoes and IMDB. But if you still haven’t seen it, here are some reasons why it might be worth your time.

In the pilot episode, we witness Bucky Barnes struggle with PTSD nightmare flashbacks of his time as the Winter Soldier and sit through an awkward therapy session; in the second episode, we see white police officers racially profile Sam Wilson, aka the Falcon. The police think that Sam, who is Black, is “bothering” Bucky after they overhear the duo argue with each other in the street.

Sam and Bucky are also both trying to figure out how to move on after the loss of their friend Steve Rogers, the former Captain America. Sam, trying to honor his own personal code as well as Rogers’ legacy, donates the iconic shield to the Smithsonian. However, the decision comes back to bite him when the government appoints a new Captain America, John Walker, without his consent.

John’s presence unsettles viewers, who aren’t sure quite what to make of the character, and creates additional emotional strain between Sam and Bucky.

On a broader scale, the series also deals with the craziness of the post-Blip world; the three and a half billion people that Thanos snapped in 2018’s “Avengers: Infinity War” have now suddenly rematerialized.

At this point in the Marvel Cinematic Universe’s timeline, many of the characters are asking themselves whether a return to the normality of the pre-Blip world is even possible; with the end of the COVID-19 pandemic in sight, many of us are currently grappling with a similar question.

Sam and Bucky’s bromantic relationship is the center of the show; their dynamic is as real, raw, interesting and funny as it could possibly be. The pair have many moments of playful banter (“That little girl kicked your ass!” exclaims Sam to Bucky) and gentle concern (“You good?” Sam frequently asks Bucky).

However, they also have a tendency to become engrossed in tense staring (“Just blink!” snaps their irritated therapist) and bitter arguments (“[Steve Rogers] gave you that shield and you threw it away like it was nothing,” Bucky accuses Sam).

After eight years of acting together in the MCU, Anthony Mackie and Sebastian Stan have an undeniably strong rapport and palpable chemistry; the pair are a delight to watch. The television episode format is clearly more conducive to character development than the MCU’s traditional films. In just four episodes, Sam and Bucky have been completely transformed from relatively static Captain America side-kicks to strong, complex and compelling heroes in their own right.

For diehard fans of the superhero genre, “The Falcon and the Winter Soldier” ticks all the boxes. Aside from a slower, more contemplative opening episode, the action-packed show has plenty of fights, mask-wearing vigilantes and explosions. It’s also visually pleasing, featuring scenic aerial shots of the Tunisian desert in the first episode as well as a scintillating panoramic view of a fictional city called Madripoor in the third episode.

“The Falcon and the Winter Soldier” is released Fridays at 3 am EST on Disney+. You can catch the final two episodes of the show April 16 and April 23.