Not your mother’s boyband… 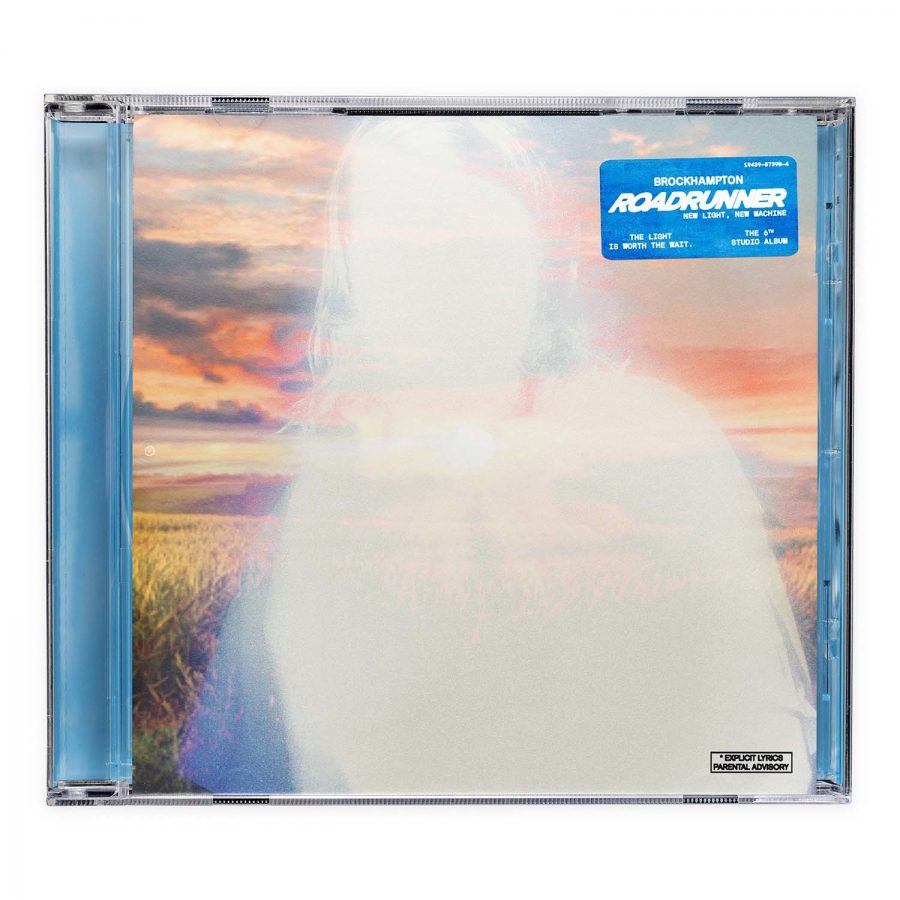 Self proclaimed “All-American boyband” BROCKHAMPTON broke onto the rap scene in 2017 with the explosive “SATURATION” trilogy of albums, quickly becoming an indie boy staple and achieving pop success not long after. Although leader Kevin Abstract has since distanced the group from the “boyband” label, they continue to embrace the advantages of their group aesthetic on their latest, and perhaps final record “ROADRUNNER: NEW LIGHT, NEW MACHINE.”

The group’s last project, “GINGER,” stepped away from the dynamic, punky energy that had defined their first four projects, embracing a more authentic and lonesome vibe. The group had certainly explored their trauma on the “SATURATION” trilogy but in an angry, abrasive manner. On “ROADRUNNER,” they continue on “GINGER”’s softer emotional path, delving into the recent suicide of Joba’s father and their reevaluation of the group’s direction. Although the album has a few low points, BROCKHAMPTON has proven they can produce a record which embraces both the high-octane aesthetic of their early work and the more raw emotional energy of “GINGER.”

The record starts off with “BUZZCUT,” an undeniable banger with intense production and an electric feature from Danny Brown. The song details the group’s sudden rise to fame and struggle to go back to their roots. “Deals they had us sign; for years, it had me blind / Think I had to hit rewind and think about why I do shine,” raps Abstract in the first verse.

The next track, “CHAIN ON” feels like wasted potential. The production is repetitive, with the exact same Isaac-Hayes-sampled synth arpeggio repeating every measure, and made even more boring by the song’s monotone chorus. The verses from JPEGMAFIA and Dom McLennon are hard, McLennon in particular having a gutsy delivery which nearly redeems the obnoxious beat, but the synth arpeggios make it impossible to put on repeat.

“COUNT ON ME” has the opposite problem; the slick trap beat and whistling melody bring a high energy to the song, but the verses are too lyrically devoid to back them up. “BANKROLL” on the other hand pulls no punches, with features from A$AP Rocky and A$AP Ferg and a head-bopping chorus from group member Merlyn.

Steely, electrifying guitar licks lead into “THE LIGHT,” which sees Joba grappling with his father’s suicide. He details the effect his father’s death had on him, saying “When I look at myself, I see a broken man / Remnants of my pops, put the Glock to his head.”

The song serves as the emotional crux of the record, which is no surprise given that the album cover features Joba’s silhouette and the title of the song is incorporated in the full title of the album. The track also features a verse from Abstract in which he talks about his own struggles with depression and suicidal ideation, “Thank God I made it, thank God I seen God last summer / I was standing on the bridge, I see all y’all under me.”

A standout on the album, “WINDOWS” is driven by a funky beat and supernatural synths, paired with a slick intro from SoGoneSoFlexy. While the track starts off with braggadocious bars about coming from nothing, it becomes increasingly political and direct as it goes on.

McLennon brings hard-hitting bars like “I watch the clocks melt as the devil dances.” His lines speak of the many changes needed in America that still aren’t being put into place. Though they fit with the track’s theme of racial injustice, they can be applied to many issues facing America in 2021. He continues, “What you finna lean on when our system is crumblin’?” Eventually time is going to run out, and there will be nothing left to stand on.

The next verse is by far the most direct, Joba hardly trying to rhyme, instead stating his opinions in the clearest possible terms: “Capitalistic greed, plague our society, like COVID-19 / Those dirty hands that feed don’t buy it / Government officials, don’t give a f*** about the children.” But his lack of poeticism doesn’t detract from the song’s impact; the lines still land, especially his most poignant line, “History stuck on repeat, in the loop of sirens,” describing the incessant cycle of violence in America.

“I’LL TAKE YOU ON” sees BROCKHAMPTON embracing their boyband roots with a high energy romantic beat and silky autotuned hook. The song is catchy, the clapping high hats keep your head bouncing; certainly a welcome relief from the heavy material of the previous two tracks. The highlight of the track is a melodic refrain from Joba, “Open up your heart and I’ll give in to you / Until you recognize that I’m into you, into you.” On the more scaled back, “OLD NEWS,” Matt Champion, Merlyn, and Joba rap about heartbreak and failed relationships alongside a feature from Baird and a chorus from Jabari Manwa, all over a simple but groovy beat.

After an introductory chorus from Joba, “WHAT’S THE OCCASION” jumps into its first verse with a gritty guitar strum and dry, sharp drumbeat. Champion lays down lines about a toxic ex, lamenting that he couldn’t be the one to fix her issues while acknowledging his own. Joba follows up with his own verse, speaking about his desire for a relationship, despite knowing he needs to be alone at this time in his life, as he says, “Gunnin’ for somethin’ I don’t need.”

Religious interlude “DEAR LORD” feels tonally disparate from the rest of the record. While thematically consistent with other tracks, a plea to God to save a “brother” and show him love, it ends up feeling like a lightly veiled excuse to give bearface some airtime.

The closing track to the album, “THE LIGHT PT. II,” naturally follows up on the themes of earlier track, “THE LIGHT.” While part one focused on Joba’s feelings of emptiness and hopelessness following his father’s suicide, part two feels more reflective and empathetic. Joba whispers a chorus over hushed, harmonious “oohs” and a melancholic guitar pluck, “The light is worth the wait, I promise / Wait, why did you do it?” Abstract also revisits his musings on bigotry, this time with an emphasis on racism. It’s a heavy closing track, but it emphasizes that BROCKHAMPTON isn’t going for crowd pleasers anymore. Their music is raw, reflecting the true feelings of the band members. They still know how to have a good time, and do so on the record, but they aren’t afraid to slow things down and embrace painful themes.