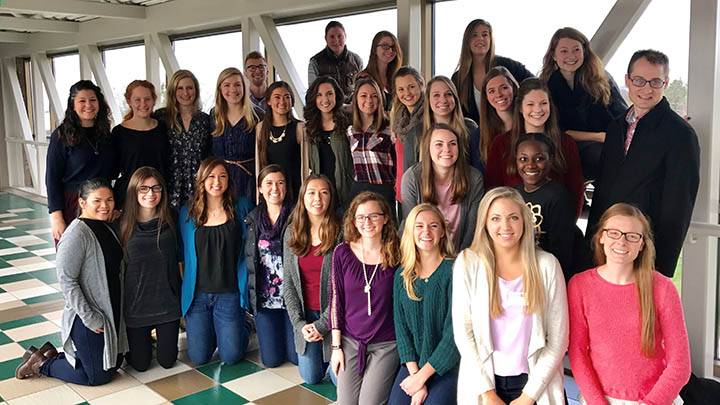 When current Calvin audiology professor Brian Kreisman walked into his first phonetics class as an undergraduate, he thought he had gone to the wrong room.

“I walked in, and every single other student was female,” Kreisman said. “I had to double-check the room number because I thought I had got it wrong. I wondered what I had gotten myself into.”

Speech pathology and audiology is one of the most female programs on Calvin’s campus. The demographics of Calvin’s program, however, mimic those of the discipline as a whole. According to the American Speech-Language-Hearing Association (ASHA), only 3.9% of practicing speech pathologists identify as male.

There are many reasons for the female-dominated nature of the profession. One is misperceptions about the role of speech pathologists.

“Most people have the perception that speech therapy is working with little kids, teaching them to say their Rs,” Kreisman said. “In reality, there is an enormous range of work that speech pathologists do, from providing therapy for swallowing disorders to doing voice therapy.”

According to Kreisman, ASHA has taken numerous steps since the late 1990s to decrease the gender gap in speech pathology and audiology. However, according to data published on ASHA’s website, the percentage of men in the professions has actually decreased by about 1% since 2000.

Travis Harrington, a 2014 graduate of Calvin’s speech pathology master’s program and current clinical staff member for the program, understands that different people have different experiences when they are a gender minority.

“It’s hard to understand the experiences others have through their graduate process, especially since my graduating class was composed entirely of women, except for me,” Harrington said.

Harrington noted that being the only male student often led to him being singled out, an experience which has continued in his professional career.

“Even now that I’ve been practicing for quite a while, I’m still singled out. I’ll go to conferences, and often be one of only two or three men. You’re just automatically singled out by being in the minority in those regards,” Harrington said.

“In many ways, there are benefits to being singled out,” Harrington said. “As soon as someone comes, they notice you when they don’t notice the other people in the room, just because you do have that difference.”

Harrington noted that the lack of diversity of speech-language pathologists has implications for the clients that SLPs serve. More male children have speech articulation disorders and require therapy. Other disorders that SLPs provide therapy for, such as traumatic brain injuries, are also more prevalent in men.

“The majority of the clients that we deal with in our lives are male,” Harrington said. “It’s just the reality.”

Harrington emphasized, however, that female speech pathologists are just as able to connect to and meet the needs of male clients as male therapists.

“I may be able to connect to a client over traditionally masculine activities like sports or physical activity, but there are plenty of female speech pathologists who also have those interests,” Harrington said.

“It’s a battle to rewrite these stereotypes,” Harrington said. “And it’s also important to know that speech pathology is a field that has an enormous amount to offer to individuals who seek positions with lots of problem-solving, research, and continued learning.”

“I love language, and in high school I really liked biology and medicine. I shadowed one of Calvin’s clinical professors at a hospital, and it led me to fall in love with the profession,” Raymond said.

Raymond explained that the long-term relationships that therapists are able to make with their patients, who often spend weeks, months, or even years receiving therapy, similarly drew him to the profession.

“Acute care clinicians aren’t able to develop the relationships over time that therapists do,” Raymond said.

As the sole male speech pathology student in his class, Raymond said that his educational experience at Calvin has been a good one.

“I am usually the only male in the room, and I get ‘randomly selected’ way more than anyone else for diversity boards, but it’s good because they actually want that opinion,” Raymond said. “I haven’t ever felt ostracized or excluded in any way.”

“It’s definitely a very female-dominated field,” Raymond said. “But like anything, it’s important to make sure that you fall in love with the practice itself.”