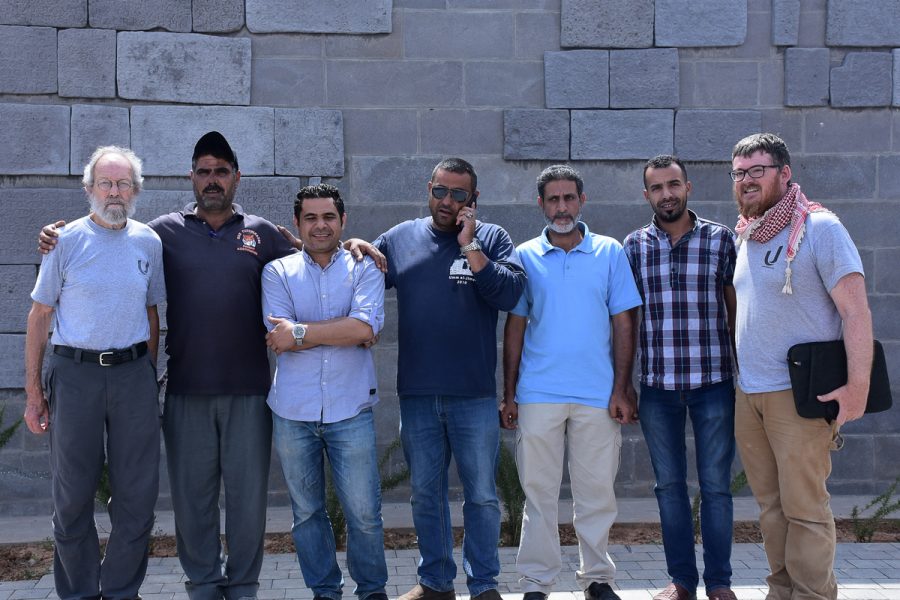 When Professor Darell Rohl met Bert de Vries as an undergraduate student, he was not the daunting archeology giant that Rohl first pictured. “I was expecting this towering figure who knew how important he was,” said Rohl. “But when I met Bert, he was most of all kind. He was humble and not full of himself in any way.”

Despite what his outsized humility might have depicted, Professor Bert de Vries was a giant in the field of archeology. He founded the Calvin archeology department and started the minor that still exists today. His work in Jordan at Umm el-Jimal, an archeological site that will celebrate its 50th year in 2022, earned him the King Abdullah Medal of Excellence, which is the highest civilian honor in the country.

Rohl worked with de Vries at Umm el-Jimal, and directed excavations under de Vries in 2019. “Here he was, this skinny old man, bouncing around with more energy than most of the teenagers in our group. He was so animated about the site, and had a depth of detailed knowledge about every structure, every turn of the trail,” said Rohl.  “And he was able to tell the most captivating stories about multiple pasts—it was magnetic.”

De Vries practiced archeology in a way that intentionally included the people whose history was captured in the excavated artifacts and ruins. “Archeology can be used as a weapon to oppress people. But Bert was using archeology as a way to liberate people and make them aware of their inheritance—it empowered them,” said Professor Frans Van Liere, a colleague in Calvin’s history department.  “He was at home in Jordan, and that was shown in the way he interacted with the people in Umm el-Jimal. He was like everybody’s grandpa.”

According to Van Liere, de Vries’ faith and strong sense of justice drove him to serve in the ways that he did. “I think he was very much inspired by the Old Testament prophets—he had a very strong prophetic faith,” said Van Liere.

According to Rohl, de Vries modeled well what it meant to be a Christian pursuing archeology. “His approach recognized the divine image in all people, in all times,” said Rohl. “It’s hard to fathom that he’s gone, but his legacy is all around us,” said Van Liere.

Students of Professor Wally Bratt knew that he had a deep love for deeply loved the German language and culture, and took his role as a German an instructor of it very seriously. “He was a stickler for proper grammar when we spoke, but he was never pedantic about it—you could see that he earnestly loved the German language and it was obvious in his teaching,” said Jonothan Laughlin, a former student of Bratt’s.

Professor Bratt was an important member of the Calvin German department and played a major role in the flourishing of the German Interim Abroad, according to colleague Herman de Vries.

“Somehow, everywhere we went Wally had a circle of friends and acquaintances who welcomed our group and showed us unbelievable hospitality,” said de Vries.  “That didn’t just happen on its own…Wally loved and respected the people there.”

Jeff DeVries, a Calvin alumnus, fondly remembers traveling to Germany on one interim trip with Professor Wally Bratt: “His mustache bristles over his smile, and behind his wire-rim glasses, his eyes twinkle with good humor. We all loved him.”

Though a serious scholar who expected excellent work from his students, Professor Bratt is also remembered as supremely kind. “Wally was the kindest, gentlest teacher I’ve ever had.  He was a model of Christian love and hospitality.  He knew his students by name, knew our families and interests, remembered comments from class and answers from essay tests even years after hearing them,” said Jeff. “He prayed with us and for us in his classroom, and he inquired if we seemed upset or distracted.”

Corrie Bakker, a former student, shares a similar memory of Professor Bratt. “He was the kindest soul, the gentlest person—he was really good at seeing people’s pain and acknowledging it,” said Bakker.

On one German interim, Professor Bratt took his students to Buchenwald concentration camp. Noticing that many of the students were distressed by the sights of the day, Bakker reports that he pulled them aside, saying, “Yes, it was horrible—but you have to remember that the sun will come up again tomorrow.”

According to Bakker, Bratt lived in such a way that reminded students that their sorrows were seen and heard, but that there was always hope.