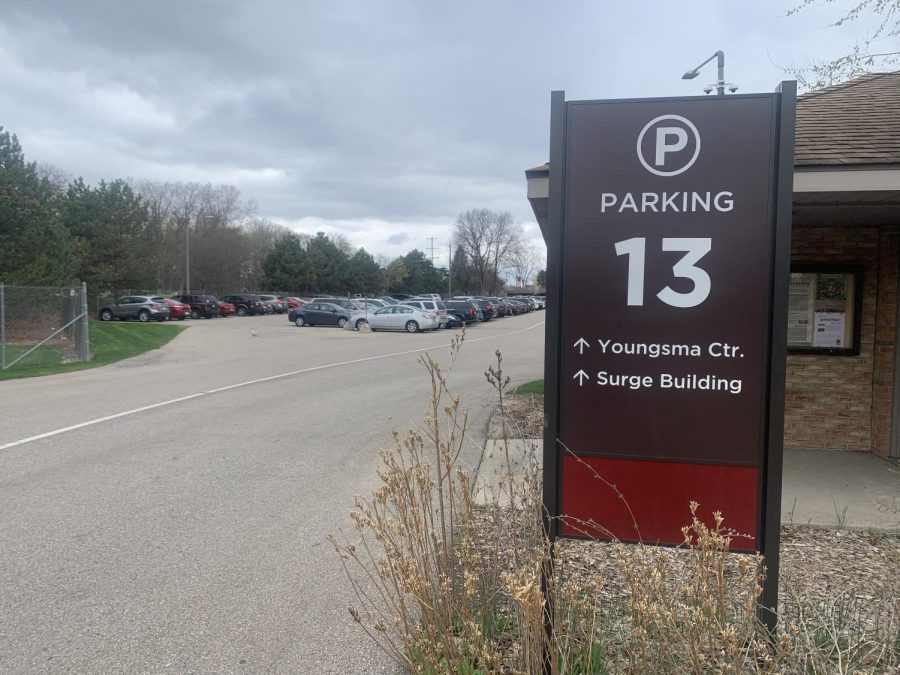 The suspect was arrested at 6th Street Park last weekend.

The suspect is currently lodged in the Kent Correctional Facility for one count of aggravated indecent exposure. Campus safety Director Bill Corner told Chimes that the suspect has no ties to the Calvin community or to Grand Rapids, from what they and GRPD could determine. GRPD declined to identify the suspect.

The suspect then drove to lot 13 by the Bunker Interpretive Center, where he approached two female Calvin students walking back to the dorms. Out of respect for the two students’ privacy, Chimes will refer to them only as Students A and B.

In security footage obtained by Chimes, the suspect waited in the parking lot, pulling out of his spot after Students A and B drove into lot 13. He then drove to where they had parked. Upon realizing they were no longer in their car, he followed the pair in his car, to the entrance of the lot.

According to the students, the suspect held his phone while recording with his right hand and a sign that read, “Can I gang rape you? You’re so pretty” with his left.

The suspect asked the students to read the sign out loud. After registering what the sign said, the two students started to walk away. The suspect followed them and asked again. After the students responded no and kept walking, the suspect drove off, leaving campus onto the East Beltline by the Seminary exit.

“When he inched up closer again, I was like what’s going to happen next?” Student B said. “If he gets out, what are we going to do next? We don’t know what [weapons] he has. You hear the worst on the news.”

According to Corner, campus safety contacted GRPD after obtaining a statement from the student involved in the first incident. After the second call, the same officer recognized that the suspect and vehicle descriptions were similar. Campus safety sent out a campus wide alert at 2:22 p.m.

The students met with campus safety and GRPD officers later that afternoon to give their descriptions of the suspect. GRPD compiled six possible suspects and asked the students to identify the man who had harassed them. Students A and B said that they and the student in the first incident all identified the same person independently of each other.

According to Brandan Bishop, Cornerstone’s director of campus safety, a female student was out running when the suspect approached her in his car, making sexually explicit comments and offering her money.

The suspect also exposed himself at the McDonald’s on 28th Street.

According to Corner, there have been a few incidents of indecent exposure during his 16-year tenure. However, lack of physical evidence has made it difficult to identify suspects.

Because of upgrades to surveillance cameras, funded by the state of Michigan’s Campus Sexual Assault Grant Program awarded to Calvin in February 2020, campus safety was able to identify the suspect’s vehicle and license plate numbers.

Students A and B told Chimes that they spotted a reflective construction hat and vest in the backseat of the suspect’s car, visible from his back window. This detail made it easier for campus safety officers to track the car’s movement through campus.

Both students say that although they’re relieved that the suspect has been arrested, they are now warier of walking on campus alone.

“We grew more aware of our surroundings,” said Student A. “We never thought it would happen on [our] college campus, walking back in the middle of the day.”

Students A and B were complimentary of campus safety and the GRPD, saying they were prompt and respectful throughout the process.

Physical campus safety escort services are also available, but because of COVID-19 precautions, these only include walking escorts, not vehicle escorts.