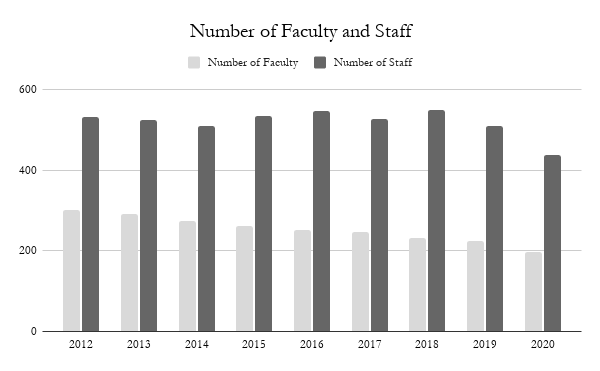 The number of regular full-time faculty have steadily declined over the last ten years.

The Academic Program Review Task Force has reviewed nearly every academic program, as the university looks to make up for a $872,000 decrease in revenue.

Only eight programs were not reviewed, because of their large or growing size. These programs are nursing, speech pathology and audiology, psychology, computer science, mathematics and statistics, communication, engineering and public health.

In an email sent to the academic division, the APR stated their commitment to being transparent and fair in handling personnel cuts.

The APR has reviewed the number of graduates, majors, minors and admitted students interested in each program, in addition to student credit hours taught and teaching assignments within each department and for the university at large. Qualitative factors like curriculum revisions, endowment support, opportunities for student-faculty research and new core and graduate programs initiatives were also considered.

The committee used these data points to decide which programs warranted further review. Department chairs met with the APR in early March.

Some smaller programs are concerned about APR’s metrics.

“Disciplines such as religion, philosophy, history, and classics have fewer majors than large professional programs,” said Kate Van Liere, chair of historical studies and history professor. “Until now Calvin has always valued these disciplines as part of the liberal arts core that all students take regardless of major or minor. Those of us who teach in these disciplines like to think of ourselves as serving the whole student body, not just a single ‘program.’”

“The weight of these decisions lies heavy on the minds and hearts of the committee members as we continue to ask difficult questions about things that cannot be quantified easily,” the email stated.

The APR reports to the Planning and Priorities Committee, which decides how Calvin allocates its resources. In the next few weeks, the APR will give recommendations to the PPC on the number of faculty lines, or tenure-track positions in a program, are needed for each department. Then the PPC will determine how many faculty lines these programs need. Finally, the Board of Trustees must approve this plan.

Professors have voiced concerns that these cuts would undermine Calvin’s identity as a liberal arts university. Even if programs aren’t cut entirely, professors felt additional faculty cuts would hollow programs out.

French professor and World Languages Department Chair Otto Selles said, “Here is the first sentence of Calvin’s vision statement: ‘By 2030, Calvin will become a Christian liberal arts university with an expanded global influence.’ I’m not sure how that mission can be filled if we don’t offer a variety of well-developed language programs that allow students to interact meaningfully with people across the globe.”

From last year to this year, World Languages has gone from 15 full-time faculty to 10, according to Selles.

Provost Cheryl Brandsen said that eliminating faculty positions is not a foregone conclusion and that all options are on the table. The university is also considering reducing retirement contributions and the Christian school benefit.

Some faculty members have asked for voluntary leaves of absence for the 2021-2022 school year, a move Brandsen said helps shoulder the burden.

However, the provost emphasized that these are only ‘one-off fixes’ that don’t address the structural changes needed. “We have built our academic programs for 4,100 students,” Brandsen said. “Now, we have 2,900 students.” Brandsen said that if faculty positions are cut, those affected will learn by July 1, 2021.

“From all that I have heard officially and unofficially, the current budget gap alone will require personnel cuts,” Selles said. “If it’s not in World Languages, it will happen somewhere else.”

Should layoffs take place this summer, they would be the third round of faculty cuts to take place in the last six years. Brandsen acknowledged how the cuts have contributed to  faculty anxiety. She hopes that current structural changes will  prevent unnerving program cuts from taking place every spring.