Met By Love to spark spiritual revival at universities 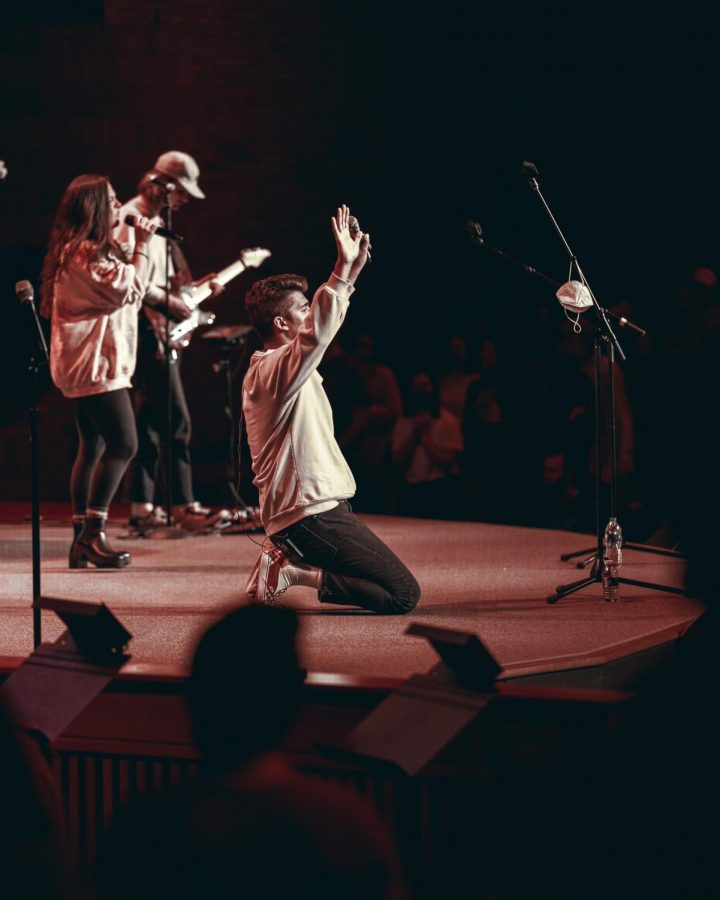 Students at a unity gathering worship at Calvary Church.

A stage is flanked by students. Five others approach the stage, pick up their instruments and mics and welcome those below them. The night begins by asking everyone to wear their masks and to stand, urging people to humble themselves and to enter into a posture of worship. The music grows, and prayer breaks out.

Joseph Brennan, founder of Met By Love and full-time missionary, never expected his classroom worship sessions at Cornerstone University to turn into anything other than what they initially were: four students hosting small Christian worship gatherings with one acoustic guitar and a cajon. “I didn’t realize the importance of this,” Brennan said.

“The presence of God is the only thing that can transform someone’s life,” Brennan said.

Soon enough, more and more people began coming to their classroom gatherings and expansion became necessary. People began giving their lives to Christ and getting baptized — “moves in the spirit that cannot be defined by man [occurred],” Brennan stated.

“God we’re hungry for you, we want you,” Brennan said to Chimes, describing the eagerness people have to dive deeper into worship . Brennan and his partners then launched Met By Love (MBL) in October 2020, multiplying the small classroom setting to several universities across Western Michigan.

Their mission, according to their culture statement, is to see every heart met by the transformational love of Jesus.

Things became more complicated when the pandemic began. MBL’s response was to host gatherings in large spaces like local churches, encourage mask wearing and social distancing, and disinfect post-gatherings. MBL has not had any COVID-19 outbreaks tied to their events.

Calvin University’s lead connection is Audrey Warner, a junior studying global development with a minor in missions. “[Met By Love is] literally a group of college students who wanted to create a space for Jesus,” Warner said.

Warner entered Calvin’s campus her sophomore year looking to dive deeper into her faith, but Calvin “seemed spiritually dry.” She considered leaving, but she says she felt God speak to her.

The words placed on her heart were, “revival hasn’t happened here yet, but I want you here when it does,” she said. Warner stayed. A few months later, Brennan contacted her to lead MBL at Calvin.

The events she and others lead have a loose structure, but the main goal is flow with worship. “We start vertical, thanking God for who he is and fixing our eyes on Jesus,” Warner said.

They include the Gospel message at every meeting; however, they refrain from heavy preaching. They leave the rest of the night for worship, opening up for encounters with the Holy Spirit.

For Calvin’s services, their turnout is typically between 50 and 140 students. At unity gatherings, over 500 students show up. This school year alone, MBL has seen over 80 baptisms and 60 salvations and rededications to Christ. They are hoping for more as the school year comes to an end.

VanZanten and Walter are both worship leaders, and they serve other universities besides Calvin. Not only did MBL allow them to meet more Calvin people, but it expanded their own relationships with God.

“I often look at our time for rehearsals as a time where we can have our hearts centered, worship Jesus ourselves — bringing ourselves into more intimacy and knowledge with God,” VanZanten said.

“MBL is a family rooted in the unity of Jesus. We are a community of Jesus loving people who desire to bring others into deep intimacy with Jesus and to walk in love,” Walters stated in an email to Chimes.

Elenbas and Ferris mostly serve in prayer, making sure to be available for prayer during events.

“I had been seeking a community of people who genuinely loved Jesus my whole life, and I was struggling to find that after my first year at Calvin,” Ferris said, describing how she felt before getting invited to MBL. “I showed up the first night and connected with the leaders and just told them I was all in!”

“It is one of my favorite things I get to do in my week, because building those connections with other Christ followers while partnering with them in prayer is so powerful,” Elenbas said, “There is no greater feeling than being used by God to bring others into his kingdom.”

When asked how MBL changed her relationship with God, Elenbas said “Growing up, Christianity was more of a to-do list, a religion. After growing through MBL, I now am able to see God as a friend, father and helper. I can have real conversations with him that I could never have before, and MBL has changed Christianity for me from a religion into a relationship. I believe God used MBL to chase me down, and now I am driven to help do that for others.”

“Come as you are,” Brennan said, encouraging all to come and encounter God. MBL meets every Monday night at 9 p.m. and locations can be found on their Instagram page.