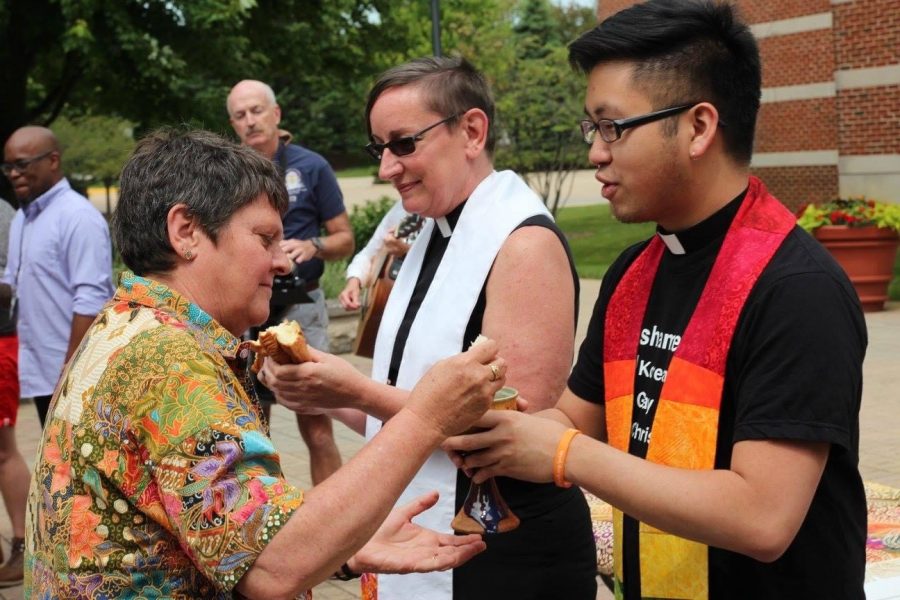 Room for All supporters serve communion.

After years of debate, disagreements about LGBTQ inclusion are threatening to split the Reformed Church in America. The General Synod, the RCA’s governing body, will determine the denomination’s decision later this year.

In 2016, the General Synod voted to amend the RCA’s constitution and Book of Church Order to certify that marriage is between a man and a woman, according to the denomination’s statement on homosexuality. These changes, however, did not receive approval from the necessary two-thirds of classes, a term for regional church groups.

In 2018, Synod voted to form a “vision group” whose job was to discern the denomination’s future in response to opposing views of human sexuality, according to the RCA website. They considered three options: staying together, restructuring, or separating.

In 2020, the group reported that the denomination’s future should involve all three possibilities. Before the RCA takes any action, General Synod 2021 will need to debate the report’s recommendations and vote on related proposals.

“Already we’re aware that some churches plan to leave the denomination regardless of what decisions are made, and these congregations deserve a thoughtful and generous separation,” the report said. “Others are committed to staying and helping to shape what remains into an organization equipped to live in theological tension and thrive in a changing context.”

The group recommended that remaining churches reorganize by “affinity classes” rather than continue with the current regional model. Each classis will then make decisions about ordination and marriage, ending the decades-long debate about LGBTQ inclusion at the General Synod.

Jim Brownson, a New Testament professor at the RCA’s Western Theological Seminary, does not think classes should be organized by affinity. “I think this is a bad idea, because in ten years, we may find a new set of divisive issues, and if the classes reorganize every time they are divided, there is no end to the problem,” Brownson said.

Several churches are already leaving, forming the Alliance of Reformed Churches which holds that marriage should be between one man and one woman. The group’s website cites incompatible views about human sexuality within the RCA as one among other reasons for their exit.

Room for All, an organization that advocates for LGBTQ inclusion in the RCA, is not committed to staying or leaving.

“[Room for All] will continue to work towards an RCA that welcomes and affirms all of God’s children, but our work does not live and die with the RCA,” the organization’s executive director Cameron Van Kooten Laughead said to Chimes. “We will continue, first and foremost, to seek what is best for the well-being of God’s LGBTQIA children.”

According to Rev. Ron Rienstra, professor of preaching and worship arts at Western Theological Seminary, the rising divisions have been brewing for over a hundred years.

The RCA established congregations in Northeast America before the American Revolution, making it the oldest denomination in North America. By the mid 1800s, these Northeastern churches became Americanized, and newer Midwestern churches retained Dutch culture as immigrants moved to the region.

As a growing evangelical subculture influenced Midwest congregations during the 20th century, different regions read scripture differently, creating divides that have defined denomination dynamics since. This interpretation divide only continued throughout time. The Room for All roster of LGBTQ-affirming churches attests to this regional divide, with just four lying outside New York or New Jersey.

“There’s a lot of anxiety in the denomination about this,” Rienstra said. The General Synod is postponed due to the pandemic until October 2021.