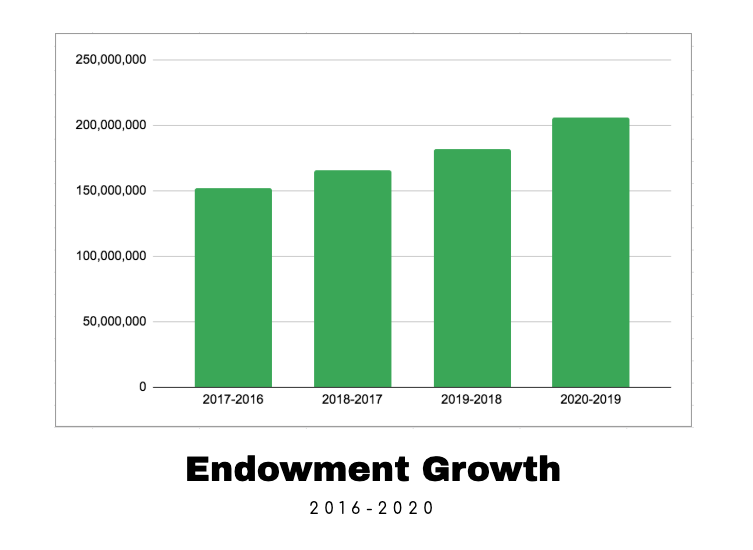 Calvin has experienced steady endowment growth for the past few years.

Decreasing revenue and enrollment have left their marks on Calvin’s budget, especially during the pandemic, but the university’s endowment has experienced significant growth, according to Vice President for Finance Jim English.

The finance division is cobbling together its plan to make up for a projected $872,000 decrease in revenue in the interim and spring semester. Meanwhile, the university’s endowment has increased by more than $50 million in five years.

It’s a stark contrast that can seem downright contradictory at times, but English summarized Calvin’s financial plans and explained the differences between an operating budget and an endowment in an interview with Chimes.

Calvin’s endowment is a collection of donor investments designed to provide for the long-term financial wellbeing of the university, its programs and institutions, and scholarships. Currently valued at more than $200 million, many of the funds making up the endowment are devoted to specific initiatives and restricted in how they can be used.

For instance, the donation funding the new school of business will not just provide for building costs. Part of the funds will also be invested to provide for 25 percent of the school’s utilities and operating costs.

Funds are often donated for the benefit of students. 47 percent of the endowment is currently devoted to donor-funded scholarships and therefore unusable when it comes to budget difficulties.

Endowment investments are growth-focused and designed to minimize risk, with a growth goal of 6.5 percent annually. The endowment’s significant growth in the past five years can be attributed to strong returns in the stock market and other investments, as well as generous donors, English said.

Moving forward, the university may take more from the endowment than is typical. The Board of Trustees recently approved a spending rate of seven percent of the average balance from the past three years. This spending increase will last up to two years. According to English, financial advisors project the spending increase to have minimal impact if it’s not extended to longer than three years.

To adjust to revenue shortfalls in the operating budget, vice presidents have put together tight budgets for their divisions and have been encouraged to cut costs wherever possible. “We’ve been able to make tough decisions in the past, we’ll make tough decisions as we need to going forwards,” English said.

In some areas, like travel budgets, COVID has decreased expenditures. In others, like health and safety, costs have gone up. Overall, the pandemic has been devastating to revenue sources from in-person events.

Though Calvin is financially stable, the cuts required to remain stable are affecting employment and student life. It’s an issue English sees no way around.

When asked specifically if there would be more faculty layoffs in the near future, English said that all options are still on the table.

Calvin has no concrete timeline for reinstating employer retirement contributions, which were temporarily halted last summer. The university has also cut student life activities budgets and implemented a soft hiring freeze, carefully reviewing open positions before deciding to hire or leave them unfilled.

Other revenue plans are focused on the long term. The newly announced three-year residency requirement, which begins with the class of 2026, is expected to ease the strain on the university’s operating budget. It’s too soon to estimate how much revenue this policy will generate, according to English.

Universities across the nation are facing similar issues, and administrators are anxiously waiting to see what federal aid will be provided. The Coronavirus Response and Relief Supplemental Appropriations Act, passed in December, allocated $3.8 million to Calvin – $1.3 million for students and $2.5 million for institutional costs.

The funds have not yet been received, and the university is awaiting federal guidance for distribution. “My hope is that we would be able to have a formula in place and distribute it to students based on need before next fall semester,” said English.