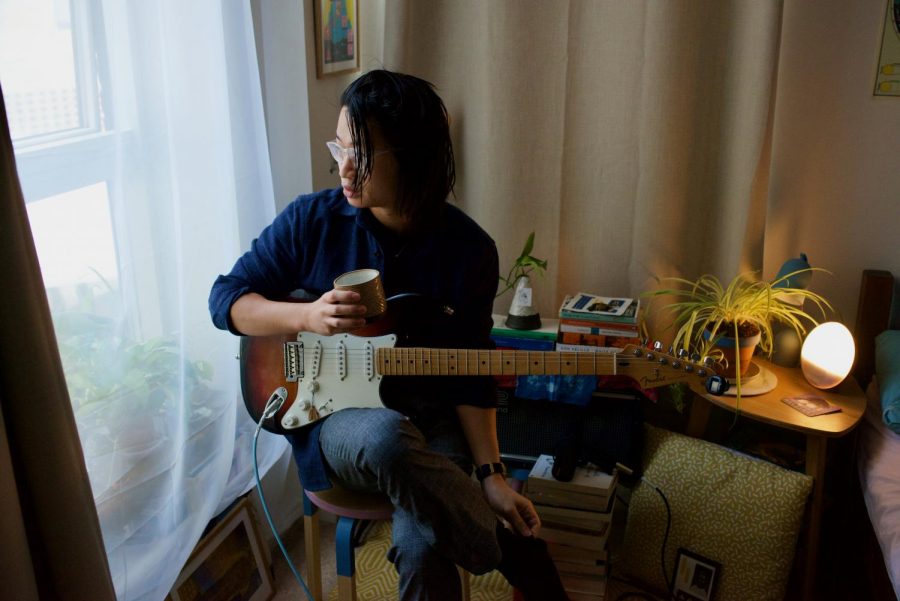 Calvin grad continues to make music and is eager to perform live shows.

Calvin alumnus James Joshua Li is pretty sure the 2013-2014 residents of Schultze-Eldersveld thought their basement was haunted. During his sophomore year, people would hear mysterious sounds and voices coming from a hidden room where Li made the music he’d eventually release under the name Liance.

Four years later, Li is coming out with another album, “This Painting Doesn’t Dry.” No longer distorted by dorm basement walls, his music isn’t quite haunted, though it is immersed in the past, weaving both history and Li’s personal memories into folk-ish soundscapes.

Li’s time at Calvin greatly influenced him as a musician. He was a member of the Student Activities Board and helped put on events at the Cave Cafe, including a Weezer cover-band night where Shrek played in the background. The Student Activities Office concert series especially helped cement that Li wanted to pursue music professionally. During his time in the dorms, Li’s resident director offered him that room in the Schultze-Eldersveld basement to practice music with his roommate, Johnson Cochran.

The summer after the roommates’ sophomore year, Li released his first album “Bronze Age of the Nineties” with the help of Cochran. The piece explores grief through a folk-influenced sound and is peppered with hyper-specific references to people, places and events in West Michigan. “Last month the plumbing got broke so I went to Yesterdog to pee,” he sings on “KZ Earthquake Tremor”.

Years after graduating from Calvin in 2016, Li’s lyrics are still vivid with specificity, but the scenery has changed. He has since moved to Brighton, United Kingdom and taken a production course at Abbey Road Institute London.

“It’s a totally new glossary of places [and] nouns,” Li said of his new-ish home. Where his older songs were populated with references to Grand Valley State University, Pine Rest, and the Covenant Fine Arts Center, his new songs speak of Sussex and Firle Beacon.

Despite being an ocean away, Li still collaborates with people he knows from Calvin. Cochran played drums, organ, and keys for the new album and Calvin alumnus Kyle Wayne Luck contributed original guitar parts.

These days, the pandemic colors Li’s life as a musician in Brighton. He mixes for clients remotely, uses a digital audio workstation, and records instruments and vocals in his bedroom, often listening to mixes while walking down the beach.

“During a time when many studios and venues are closed, it can be a rather solitary job,” Li said. “Sometimes I feel more like a fire watcher than a musician.”

“The pandemic definitely sparked the realization that I wanted to write about this time but also how it relates to the past,” Li said. “Housekeeping in isolation/Don’t want to live through history no more,” he sings on one of Liance’s latest singles, “The Decameron”.

The single’s simultaneously zoomed-in and zoomed-out perspective foreshadows the rest of the upcoming album. Li sings about Roman roads and pandemic anxiety, ambiguous relationships and climate change. The ancient mingles with the present and the personal intersects with the global. It’s fitting that the album’s title, “This Painting Doesn’t Dry”, suggests a state of constant creation and newness.

Both on a grand scale and in Li’s own life, nothing is static. He just moved into a new flat. He’s eagerly anticipating playing live shows again when venues open up. And Liance’s new album will be released on April 21 this year.