Tracing over a decade of Taylor Swift’s career and music 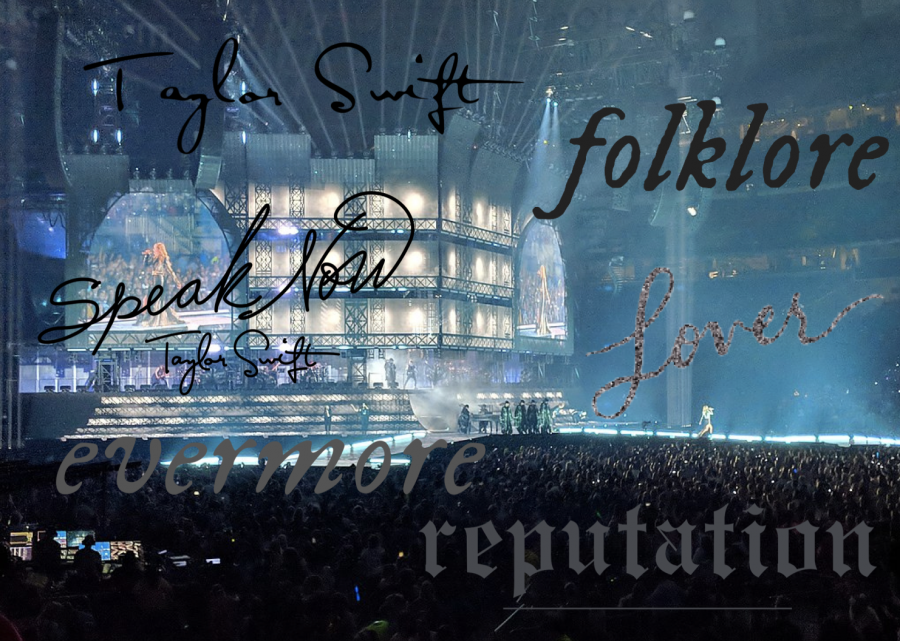 Taylor Swift has had countless albums throughout her career and continues to produce new ones regularly.

Pop stars have notoriously short shelf lives; female pop stars especially so. Given the relentless market demand to stay relevant and attractive, Taylor Swift’s fifteen year reign as a major player in the music industry is impressive and notable. Her nine albums span genres, including country, electro-pop and indie folk and comment on a career filled with controversies and reinvention. As Taylor Swift re-released her single “Love Story” on Feb. 12 and plans to drop the re-recorded version of her second album Fearless on April 9, it’s worth looking back at her decade-long career.

Hitting the scene as a sixteen-year-old, Swift’s first studio album is largely country but has some pop elements as well. Songs like “Tim McGraw” and “Teardrops on my Guitar” took off for their lyrical strength and were middle school sleepover staples. Swift became a darling of the country music scene and received favorable reviews for her first album.

Swift continued her country-pop crossover appeal with her second studio album “Fearless.” Swift’s storytelling is directed at the experiences of her fans, largely teenage girls. “Fifteen” recounts Swift’s first days of high school and the subsequent heart breaks and friendships that followed, “Love Story” is a romantic nod to dating a guy one’s family can’t stand and “You’re Not Sorry” drips with all the hurt and betrayal following a cheating-induced break up.

Released a year after Kanye West infamously interjected at the VMAs that Beyonce should have won the award for best music video, “Speak Now” maintains the country pop sound of her last two albums with a sharper lyrical edge. In “Dear John,” Swift calls out ex John Mayer by name, starting her legacy of calling out famous ex-boyfriends. Likewise, “Innocent” addresses Kanye West’s ‘imma let you finish.’ Swift remains America’s sweetheart, but West’s call out foreshadows some of the backlash that is to come.

Swift steps away from her country pop background in the “Red” Era, trying out pop rock for anthems like “We Are Never Getting Back Together” and “I Knew You Were Trouble.” This same year, she appears on the cover of Vogue, perhaps trying to signal a more mature era. Swift’s line up of  famous boyfriends become increasingly important to her public persona, although Swift dismisses the outsized attention to sexism in the music industry.

Swift sheds her country label completely with “1989,” a synth-y mainstream pop album. It was met with both commercial and critical success. Swift moved from writing exclusively about romantic endeavors to covering aspects of identity. “Shake It Off” was Swift’s attempt to go on the offensive against media criticism. “I go on too many dates / But I can’t make them stay / That’s what people say.” Notable hits include “Blank Space” and “Bad Blood,” a nod to her long-standing feud with Katy Perry.

But the music videos for “Shake It Off” and “Wildest Dreams” received criticism for cultural appropriation. Likewise, Swift’s girl gang, stocked with conventionally attractive and wealthy women, felt like a hollow, corporate-feminist ploy.

In between “1989” and “Reputation,” Swift and West found themselves in conflict yet again. After depicting Swift naked in bed with him and other celebrities and writing “I feel like me and Taylor might still have sex / Why? I made that b*tch famous,” West was accused of vicious sexism. However, Kim Kardashian sprang to her husband’s defense, tweeting a recorded phone call where Swift appeared to agree to the use of her name and image.

The narrative turned on Swift, who became emblematic of white feminism maligning Black men. Swift released Reputation, a full synth-electro pop album, embracing the manipulative, fame-hungry identity that she received in the West feud. In the music video for the first single, “Look What You Made Me Do,” Swift finishes by mocking the personas she’s taken on throughout her career.

“Lover” is a return to the romantic, storytelling lyrics that marked the beginning of Swift’s career. At the same time West flirted with MAGA-culture, Swift embraced leftward politics as part of her brand with an endorsement of the Democratic congressional candidates in Tennessee, a departure from her notoriously apolitical past. “The Man” comments on double standards for female and male artists, and “You Need To Calm Down” is LGBTQ-rights advocacy adjacent. Most of the songs are cozy, warm-hearted love ballads, including “Paper Rings” and the titular track “Lover.” This album is Swift’s return after her fall from grace.

Notably, it’s the first studio album not done by Big Machine Records. Swift ignited a celebrity civil war after the producer who brought her into the label sold Big Machine to Scooter Braun. This deal meant that Swift could not own the masters of her previous albums. Braun argued that Swift ceded the masters for the sake of something.

Dropped as a surprise album in the middle of the COVID-19 pandemic, “Folklore” has a newfound indie sound that hearkens back to some of Swift’s roots. The album has a subdued, lonely sound, reflecting the isolation that the pandemic entailed.  “Exile,” a single which features Bon Iver, is a forlorn breakup song where Swift’s lyricism shines, as are singles “The 1” and “Cardigan.” According to NPR critic Ann Powers, “Folklore” was Swift’s reckoning with her unusually long career and needed a successful turn to stay relevant.

Continuing her embrace of the cottagecore aesthetic and third-person songwriting, “Evermore” picks up where “Folklore” left off. Critically well-received, Swift plays with genres, even bouncing back to country for “Cowboy Like Me” and personal favorite “no body, no crime.” “Champagne Problems,” a story of a rejected engagement, is a heartbreaking reflection of what all went wrong.

This album, alongside “Folklore,” feels like Swift unloading the drama of her past career and defining her music as more elegant and subdued. What propelled her into stardom, her heartfelt lyrics and storytelling, are what’s centerfold, and Taylor Swift feels settled and poised for where her career will go next.

This article has been corrected to state that the song “22” was on the Red album, not 1989. Chimes regrets the error.