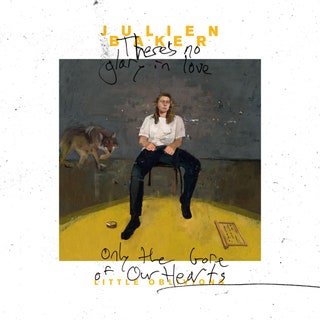 Ruthless self-examination has been a signature of Julien Baker’s music since her 2015 debut “Sprained Ankle.” Now returning with her third studio album, “Little Oblivions,” she continues this introspective tradition, building on the sounds of her previous music to present a louder and more expansive listening experience. It is this combination of Baker’s brooding lyricism and her foray into bolder instrumentation that allows for a genuine catharsis.

Throughout the album, fans of Baker will recognize the reverb-heavy guitar that was central to her first two projects. “Faith Healer,” the leading single, begins this way, Baker’s breathy yet strong vocals beautifully juxtaposed with her warm picking. However, the song quickly opens up to a full band:  a pounded snare beat, a lightly droning synth and layered guitars.

The consistently rich instrumentation of “Little Oblivions” envelopes Baker’s voice but does not overwhelm it. Rather, it bolsters the raw emotion with which she sings, displaying her cynical lyrics in unflinching, confrontational sonics. “Faith healer come put your hands on me / A snake oil dealer,” she sings, “I’ll believe you if you make me feel something.”

This notion, the propensity to embrace unhealthy relationships for some  semblance of stability, drives much of the lyrical content of the album. She admits, almost ad nauseum, to her own failures and the cyclical nature of her addictions. On the opening track, “Hardline,” Baker concisely articulates this: “Start asking for forgiveness in advance / For all the future things I will destroy.”

While lyrically eloquent and aurally gorgeous, “Little Oblivions” is not always easy listening. Baker’s ruminations on substance abuse and self-contempt lead her to starkly haunting lines such as “I’ll wrap Orion’s belt around my neck / And kick the chair out,” sung on “Heatwave.” She refuses to bridle the assertion of her misery, and the listener suffers alongside her.

The weariness one feels listening to “Little Oblivions” extends, at times, beyond the weight of her confessions. Hearing Baker artfully explore new sounds is enthralling, but it leaves the moments in which she retreats into the familiar territory of her earlier music feeling rote and uninteresting. Her ever-present reverberated guitar picking often heightens the drama of her vocals but occasionally becomes numbing, an effect that may or may not be intentional.

Where Baker shines brightest, however, is in her piano ballads. They display her ear for complex and stirring melodies, “Song in E” particularly. The stripped back tune relies exclusively on her steady vocals and a mournful, unexpected chord progression. At the climax of the song, just when the listener expects Baker to belt out the end of the line, she slides into a soft falsetto: “I’d wish you’d hurt me.” This surprising surrender bears a crushing weight, a turn of lyric and voice that reveals the constraint of an astute and discerning musician.

Ultimately, Baker’s stories and reflections take center stage in“Little Oblivions.” Documenting a relapse after six years of sobriety, the songs convey a visceral awareness that her addiction exists as an inescapable reality. In “Bloodshot,” she admits, “It isn’t like I do this on purpose / … Looking for little oblivions.” She knows her dependence to be out of her control, her desire to be lost in “little oblivions” has become for her an inevitable fact of life.

In the latter half of the album, she questions God’s place in her seemingly hopeless situation. Born and raised in a devout family, Baker still calls herself a Christian, though her faith has changed radically over her teenage and adult life. As a gay woman, her relationship with the Church has long been tried and tested. In “Ziptie,” the album’s closing track, she asks Christ when he will “Climb down off of the cross / And change [his] mind” after seeing that “Everybody looks like me.” Baker wrestles with the grace she has received, longing to simply be told she isn’t worth it. “It’s the mercy I can’t take,” she sings to a devastating effect in “Song in E.”

“Little Oblivions” offers no consoling hope or final promise of recovery. The album ends with a despairing request: “Drag me away in the dark / Take me and tear me apart.” Though sonically complex and beautiful, with thoroughly flesh-out songs, the project remains a long-suffering look into the mind of a depressed and addicted woman. Despite this, “Little Oblivions” feels essential for the current milieu. It would be far easier to sit silently in grief and hurt, but Baker chooses to declare her discontent, and in giving voice to her torments and the deep-seated horror of her own condition, she finds the strength to continue singing.