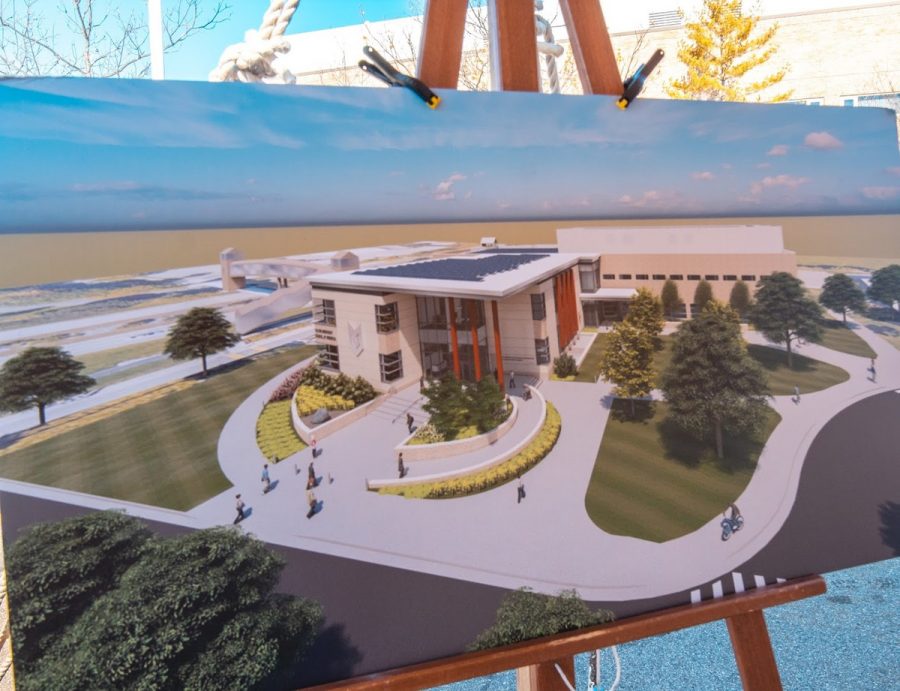 Rendering of plans for the new business school.

President Michael Le Roy and the founding donors symbolically broke ground on the new school of business on Tuesday, Mar. 2 at 11 a.m in a parking lot outside the DeVos Communication Center.

“This work stands on the shoulders of giants,” Le Roy said, “and there are lots of giants that we have gratitude and thanks for today.”

Speaking to a crowd including Grand Rapids Mayor Rosalynn Bliss and former President Gaylen Byker, Le Roy thanked those who were involved in kicking off the construction of the school. Le Roy also announced that Calvin’s planned Master of Business Administration program has been approved and will launch in six months.

Founding donors Sidney and Cate Jansma, whose lead gift encouraged Calvin to dream big for business, are “strong encouragers of Calvin students and people who hold up Calvin’s mission in every aspect of their life,” according to Le Roy.

Sidney Jansma is a Calvin alumnus who currently serves as Chair of the Board at Wolverine Gas and Oil Company, which is best known for locating what became the Covenant Oil Field ―one of the US’s largest onshore oil finds in recent history–and is a former member of the board of directors of the Acton Institute.

According to Jansma, the project and his role in it are just the latest in a long lineage of support for Calvin from “thousands of people.”

Announced in May 2020, $22.25 million anonymous gift will go towards both the construction of a new building off the DeVos Communication Center and the endowment of a dean position and other positions within the business school. It is the largest single donation in Calvin’s history.

Jansma shared dreams of a thriving school of business at Calvin, drawing in students interested in all sorts of technical and professional fields to “go to Calvin University and learn what’s involved in a business.” Le Roy said plans for the business school will also include increased opportunities for student and faculty research.

Jansma hopes the project will inspire more support. “I hope this is a catalyst also,” Jansma said, “for some of our friends in New York and Washington and California to say hey, let’s have a school of nursing, too.”

Co-Dean and Director of Calvin Center for Innovation and Business Bob Eames envisions the new facility as a “warm and welcoming place…to help [our students] become agents of renewal in the field of business.” Eames described the establishment of the business school occurring in his lifetime as “a surprise…It feels like Christmas.”

This article has been corrected with respect to spelling of names. Chimes regrets the error.