Zombie majors: students struggle to finish their degrees as the university cuts programs 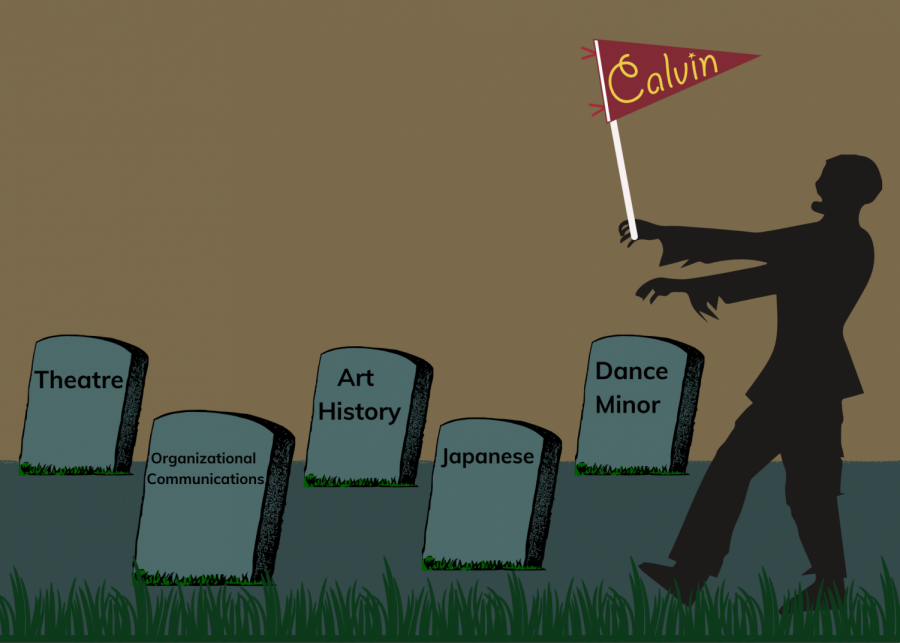 The University has decided to cut several majors and minors, including Art History, Theatre, and Japanese.

Junior biochemistry major Katherine Koning fondly remembers using paint as a prop in another student’s choreographed piece for the dance minor showcase. As a freshman dance minor, Koning had four years of dance ahead of her: to practice the art form, study it academically and eventually choreograph her own pieces for the showcase. She couldn’t have known Calvin would cut her program by her junior year.

The dance minor was one of several programs cut last year, including Japanese, art history, theater, and organizational communications. The cuts were due to Calvin’s enduring financial issues and COVID-19-related budget shortfalls. Students now find themselves in programs that the university is phasing out, leaving them with fewer class options to finish their degrees.

“It’s kind of crazy to think of the fact that I’ll be one of the last dance minors,” Koning said. She said the cut represents the loss of a unique program that combined athletics, academics, and the arts—a program that was an important factor in Koning’s decision to come to Calvin.

“It’s sad to see a program like that go,” Koning said. She does, however, acknowledge what went into the decision to cut the minor. “I think it was a logical program to cut, given numbers.”

According to Koning, dance minors now work with the kinesiology department on an individual basis to determine each student’s academic plan going forward.

For Koning, it has so far involved contracting an interim dance class, which is similar to doing an independent study. For other students in cut programs, the change in class offerings means transferring to another university.

“If I didn’t have to transfer, I really wouldn’t,” said sophomore actuarial science and Japanese double major Moriah Smith. “But if I stayed here, it’d be really hard to fulfill my credit requirements.”

According to Smith, full-size Japanese language classes won’t be offered at Calvin after this semester. Students who want to complete their major or minor can do an independent study with the Japanese professor. Smith, however, said that she can best learn Japanese in a classroom, speaking the language with other students.

Smith was drawn to Calvin for its unique offering of both actuarial science and Japanese, as well as its community. Now, she’s made the tough decision to transfer to Ohio State University in the fall.

“It’s the worst feeling knowing that you have to leave,” Smith said, emphasizing that she’ll miss her friends and the Japanese professor at Calvin. She also reflected on how the university’s broad degree options are narrowing. “That makes Calvin lose its appeal,” Smith said.

For some students choosing to stay, their academic future looks different than it did before.

Theater minors will have to replace some of their theater classes with film classes, according to sophomore theater minor Grace Pilarski. Pilarski also said that those who are able to complete their theater minor are working with Kathi Groenendyk, the communications department chair, to figure out which classes can count toward the degree.

Pilarski echoed the devastation voiced by other students. “It was absolutely brutal seeing all the freshmen come in who were planning on being theater minors and weren’t able to,” she said. As a sophomore, Pilarski narrowly missed this experience.

For some of the cut programs, a few classes will still be offered as part of core curriculum. This is the case for art history, according to professor Craig Hanson.

“I still have students who discover they love art history and I’m happy to nurture that in any way I can,” Hanson said.

For other programs, courses won’t be offered. According to dance professor Cassandra Vander Well, all dance courses have been taken out of the course catalog aside from a couple required by the state of Michigan.

Working with students after the cut, Vander Well said, has been bittersweet.

“I’m finding a lot of joy out of it,” she said. She also reflected on what’s in store for Calvin’s dancers going forward. “I hope that students at Calvin continue to use dance for God and come up with creative ways to still engage with the art form.”

Faculty were alerted last Wednesday that more programs were under review to potentially be eliminated. Students affected by the last round of prioritization cuts know the disappointment of losing a program. Their experiences may foreshadow more losses to come.