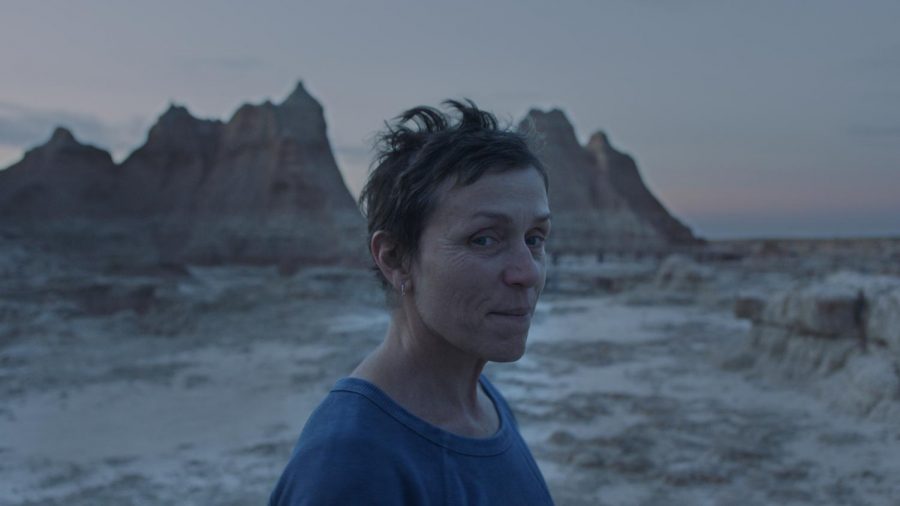 Frances McDormand stars as Fern, a woman trying to find herself while struggling to make a living.

Is the romanticization of poverty empowerment for the impoverished? Or is it merely sadist escapism for the wealthy?

Based on a non-fiction work from journalist Jessica Bruder, director Chloé Zhao’s Oscar-favorite third feature explores the effort by one woman to find herself while struggling to make a living. Fern, portrayed by Frances McDormand, lives in a van. She worked alongside her husband at a sheetrock plant in Empire, Nevada, until his untimely death. But when the plant shut down shortly after, she and the other 700 people in the town lost their jobs.

Placeless people contrasted by vast open space, the film’s harsh portrayal of capitalistic steamrolling grabs the viewer by their heartstrings. But preying on empathy can only take you so far; you need to back that up with substance. “Nomadland” feels sparse, shots tied together by the faint thread of linear narrative. Shot and edited in a documentary-esque style, Zhao tells the audience very little, instead showing passage of time through movement and simplistic motifs like a New Years celebration or the protagonist’s seasonal job at Amazon. The pacing is fast; locations change within minutes, mimicking the nomadic lifestyle of the characters, never staying in one place for more than a few scenes. But what’s lacking is a single thread or character arc for the viewer to follow. The protagonist, Fern, is in every scene, but the emphasis seems to lie elsewhere.

Perhaps this is due to Zhao’s pursuit of neo-neorealism, a choice which feels innately authentic, though hindered by the film’s greater structure. The cast of the film consists mainly of non-actors, people who live the nomadic lifestyle portrayed in the film playing fictionalized versions of themselves, including van-life Youtuber Bob Welles. But the absence of Hollywood stars leaves you wondering why Zhao felt the need to include McDormand’s character at all. It’s understandable to attach some star-power to a film like this, one that many might not give a chance if it weren’t for McDormand. The issue is the seemingly conflicting narratives at play.

In one lane, there’s a story of McDormand’s character coming to terms with the intertwined losses of her husband, home, and steady work; in the other lane, a documental inspection of people living off the financial grid. Neither story seems like a backdrop to the other, and neither feels fully fleshed out. Had Zhao put full focus on the nomads themselves (or perhaps just done a pure documentary) the end result would feel more cohesive. Likewise, if McDormand’s character had been given a more complete arc, the inclusion of non-actors would be an added bonus rather than a bizarre distraction.

Perhaps the most bizarre choice of the film, though, is its extreme apoliticism. In a film which feels so anti-capitalist, you’d expect to come away with a clear message in that vein, but there’s none to be found. This could be attributed to the documental angle of the film, trying to provide an objective view at these people and their lives, allowing the viewer to craft their own opinion. But it feels uncomfortable to see a vast Amazon warehouse portrayed with such indifference in 2021. People are shown struggling to make ends meet, but there’s no discussion of why–why in the country with the highest (nominal) GDP in the world, there are tens of millions living below the poverty line. Instead of being explored, poverty is just a backdrop to McDormand’s journey of self-discovery.

Despite all this, though, “Nomadland” still manages to convey feeling, and for that it should be valued and commended. It’s not the perfect masterpiece it has been hailed as by festival-goers and critics, but it’s undeniably a cut above the original “content” being pedaled by streaming giants (although, ironically, “Nomadland” itself was purchased by Hulu). The film is beautifully captured, with Malick-ian shots of flora, fauna, and dusky horizons interwoven throughout the narrative. It also tells a story with which many people seem to connect, even if I did not, so maybe you will too. Anything’s better than the newest Netflix original… right?