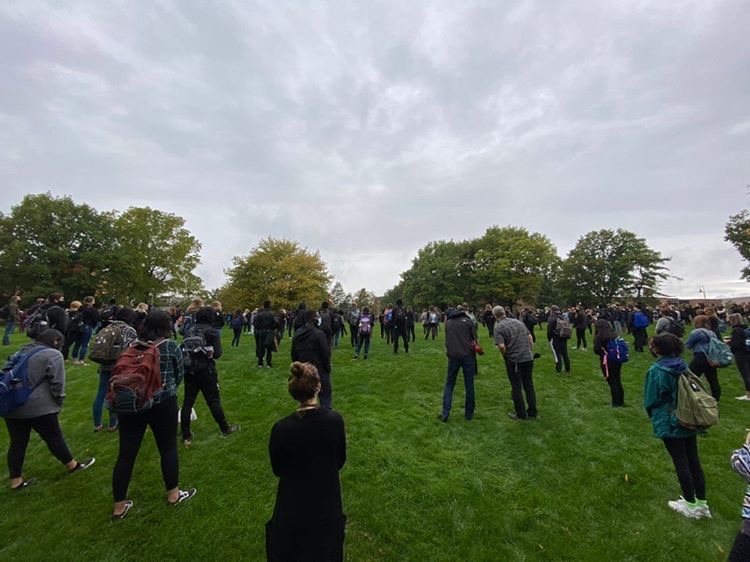 Students wore all black to stand in solidarity with Breonna Taylor’s family during an outdoor chapel service in September.

Last summer, Black Lives Matter activists protested the murders of Breonna Taylor, George Floyd and others at the hands of police. Members of the Calvin community urged the school’s administration to acknowledge the events, including former Residence Life staff members who called out the institution’s late response in an open letter.

At the beginning of the school year, in the wake of this national racial reckoning, Calvin established the Students of Color Presidential Advisory Group, a group of students of color that provides advice and perspective for Calvin’s administration on race-related issues. Although not a direct result of the protests, the group’s creation was made more urgent in light of them, according to group member and junior social work major Samuel Carrasco.

The group’s members are ten students of color who have been involved in on-campus racial justice-related initiatives before, Carrasco said.

In an email inviting students to be a part of the group, Executive Associate to the President for Diversity and Inclusion Dr. Michelle Loyd-Paige wrote that the group would exist to help President Michael Le Roy and herself to see things they might be missing about making campus welcoming to BIPOC students and to keep students in the loop on efforts Calvin is making.

According to group member Shelton Rodriguez, they meet twice a month: once with just the students and once with Le Roy. Rodriguez, a sophomore public health and global development double major, said it’s the students that set the agenda.

So far, the group has met with leaders at Calvin and in the broader community. According to Rodriguez, they’ve talked about the tokenization of Black students in Calvin’s marketing material, encouraged admissions to reach out to more racially diverse high schools, helped plan the new core curriculum’s cross-cultural engagement requirement and met with the director of Campus Safety to discuss building stronger relationships with AHANA and international students. Much of their work, he said, is setting the stage for in-person community events that can only happen post-COVID.

In an email, Le Roy also said that the group has met with Grand Rapids Mayor Rosalynn Bliss to discuss community policing. He added that working with the group has been a highlight of his year.

Carrasco noted that the leaders they have spoken with have been receptive and that Loyd-Paige and Le Roy “have had [their] backs every step of the way.”

Things haven’t changed overnight in Calvin’s recent past. In 2015, someone traced the words “white power” and a swastika in the snow piled on a student’s car. About five years later, Chimes reported that Asian students were experiencing coronavirus-related racism on campus.

Nunez said she wishes the group existed before last summer’s Black Lives Matter protests to help shape Calvin’s response. “That should have been a no brainer.”

Nunez also hopes that the group will be vocal about the lack of professors of color, noting that she hasn’t had one in her three years at Calvin. She did point out that Calvin’s leaders are setting a good example for the student body by actively listening to marginalized voices and is hopeful about their work.

“[Having the group] is a step in the right direction,” Nunez said. “And I look forward to the days when we won’t need a council to advise anyone about those types of issues.”