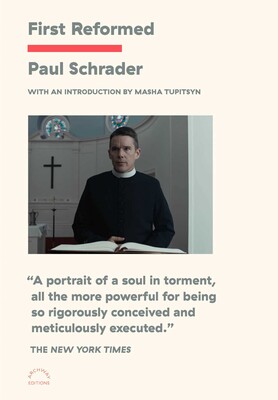 It may be less than two years old, but Archway Editions, a literary imprint of powerHouse Books, already has a promising catalogue, including a print-edition of Paul Schrader’s “First Reformed” screenplay.

Chris Molnar, Calvin class of 2009, co-founded Archway Editions with his coworker Nicodemus Nicoludis after attending the premiere of Ishmael Reed’s play “The Haunting of Lin-Manuel Miranda” in May of 2019.  “We were blown away by how powerful it is,” Molnar described, “how deeply relevant to American culture today.”

The play got Molnar and Nicoludis thinking about how mainstream publishing misses interesting voices. The two were working at powerHouse Books at the time, so they asked the company’s founder Daniel Power if they could start a literary imprint with Reed’s script as its flagship title. Power agreed, and with his support the two started work on Archway Editions.

Archway Editions currently has three titles in print: Reed’s play, an anthology titled “Unpublishable” comprised of works collected at the POWERHOUSE Arena reading series of the same name and “Acid Virga,” a memoir-in-verse by Gabriel Kruis, another Calvin alumnus. Coming up, they will be publishing work from young authors in various genres, work from Stacy Szymaszek, Masha Tupitsyn and Alice Notley, as well as more work from Ishmael Reed.

Molnar also hopes to publish lesser known authors and authors with more controversial work. Molnar said, “There isn’t a robust pipeline from the underground to the mainstream, and you see it by the lack of new ideas in writing… It’s not good for society as a whole, and we want to change that.”

Archway Editions will also be publishing the screenplay of Paul Schrader’s 2018 film “First Reformed.” The origin of this arrangement was rather unceremonious: Molnar looked up Schrader’s e-mail, sending him an “impassioned, unsolicited plea” for Archway Editions to publish the screenplay, only for Schrader to reply a few hours later with a simple “sounds good,” sent from his iPhone. Although it makes for a funny story, Molnar emphasized how grateful Archway Editions is to have someone with Schrader’s rigor and thoughtfulness in their catalogue and in American culture in general.

Accompanying the screenplay is an introduction from author and critic Masha Tupitsyn, which explores Schrader’s oeuvre through the lens of his CRC background and place in Hollywood.

Molnar says Archway is focused on publishing more and building name recognition, so that they can expand the diversity and volume of the work they publish. However, they have already been surprised by the number of manuscripts they have been sent and the bookstores they have been able to get into.