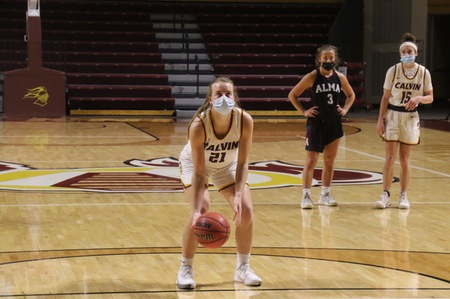 Calvin’s women’s basketball team got off to a rough start with three consecutive losses to Alma, Trine and Hope but has since bounced back with two straight victories over Olivet and Adrian. Despite rough circumstances, the Knights had some positive results.

Due to COVID protocols, the team has been unable to play in front of family and friends and are forced to play a shortened season. Despite all this, Coach Christner has remained positive. “We recognize how hard it is,” he said, “…it’s hard to not get a post-game hug from a parent, or have friends in the stands cheering you on. It’s challenging to play in uncertainty about tomorrow…so we choose to find some joy and work on individual and collective growth.”

This joy has been evident in their last two games as the team has collectively increased their energy and play and have reaped solid results. One important reason for this turnaround has been junior Gabby Timmer. She struggled through the first three games and then bounced back with great performances over the next two games averaging 22 points and 11.5 rebounds in double-digit victories for the Knights.

Christner spoke to Timmer’s impact, and the other leading scorers of the team, Stephanie Coors and Leah Harris.“Our team derives a lot of energy from Gabby Timmer, Stephanie Coors and Leah Harris,” he said. “Gabby has gotten her feet under her a bit in the last two games, Steph continues to work her way back to form and was outstanding last night. Leah has worked hard to establish herself as a consistent perimeter threat and has been really efficient.” These three individuals lead the team as the only members averaging double-digit points per contest.

This season has also allowed other contributors to emerge. Junior Kamyrn Elgersma has provided consistent offense from the bench averaging 8.2 points per game while shooting 52.6 % from three, fourth in the MIAA this season. Overall Christner has been proud of the bench contributions the team has received. “The best part of coaching is to see people who work hard get a shot,” he said. Kam Elgersma and Caitlyn Demaree have made about ½ of our team 3s on the year. They both have given us quality minutes off the bench. Sara Nealy is coming along, Rebecca Boeve continues to play with energy and maturity and is a very reliable post off the bench.”

The turnaround started with a great effort against Hope where, despite the loss, they challenged the Flying Dutchmen for the majority of the game and walked away with seeds of growth. From this game onwards they have steadily improved and show no signs of stopping. Christner expressed how certain players who are poised for better performances can go a long way in helping the team achieve its goals. Christner said, “I continue to look to Baylee Galán Browne to keep progressing. She was an integral part of our success last night defensively and did a nice job on the glass. I think as she and Sara in particular continue to take good shots, they’ll start falling on a more regular basis.”

The Knights will look to continue their hot streak against Alma next Monday, Feb. 15th