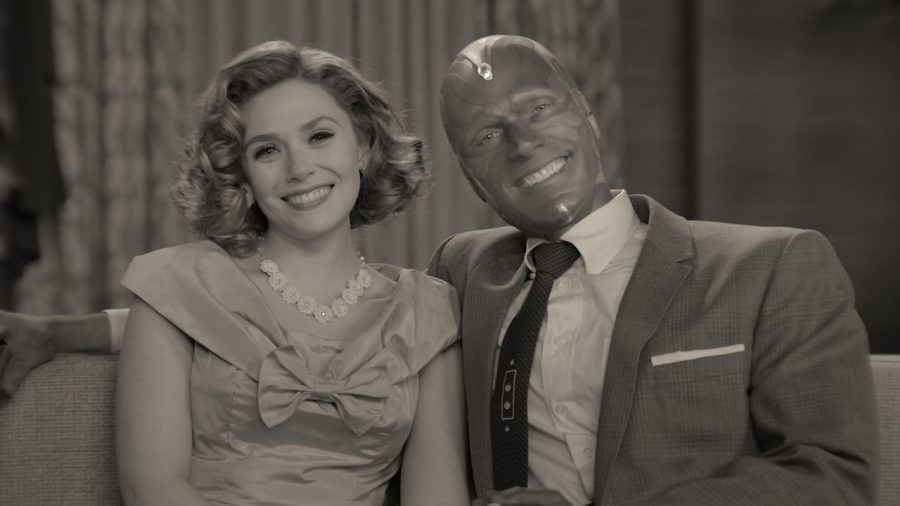 New episodes of WandaVision are released Fridays on Disney+.

The latest addition to the Marvel Cinematic Universe, Phase Four opener “WandaVision,” is a wonderfully wacky spoof of twentieth century sitcoms but with a creepy, unsettling edge that will keep viewers on their toes, excited to see what happens next. In the show, Avengers Wanda Maximoff and Vision are seemingly happily married, living their best life in the quaint little town of Westview. But, as Vision eventually admits to Wanda in the third episode, “there’s something’s wrong here.” There are signs that Westview is a simulation.

For example, in the premiere, Wanda and Vision are unable to tell Vision’s boss and his wife when they got married or where they came from. In the second episode, Wanda hears someone calling out to her from a radio: “Who’s doing this to you, Wanda?” In the latest episode, we finally get to see what’s happening in the world outside Westview: SWORD, an extra-governmental intelligence agency founded by Maria Rambeau from “Captain Marvel,” is monitoring and investigating the Westview anomaly. But, so far, they’re still grappling with the same questions as avid MCU fans everywhere: Why sitcoms? Is Vision alive? What (or who) is behind this ― is it “all Wanda” (as Monica Rambeau believes), or is someone or something else more sinister involved?

Although “WandaVision” understandably centers around Wanda and Vision, they might not actually be the most interesting and compelling characters in the show. One of the MCU’s greatest strengths is its large cast of characters, which can then be mixed and matched in ways viewers probably never expected. A good previous example is Thor’s friendship chemistry with the Guardians of the Galaxy in “Infinity War” and “Endgame.” In “WandaVision,” the introduction of “Thor’s” scientist Darcy Lewis and “Ant-Man’s” S.H.I.E.L.D. agent Jimmy Woo may leave viewers wondering where the writers will take the show next. “WandaVision” also introduces a few new characters, such as Agnes, Wanda’s friend and neighbor. There are several clues that she is different from the other people of Westview creating interest for future episodes.

Overall, “WandaVision” is the perfect opener to the next era of the MCU. Its unique meshing of sitcom narratives with science fiction and mystery elements gives it broad appeal. For those exhausted or unenthralled by standard superhero storylines, “WandaVision” is a welcome breath of fresh air. Additionally, its short twenty-minute runtime easily fits into busy schedules. New episodes are released Fridays on Disney+.