New men’s basketball roster off to a promising start 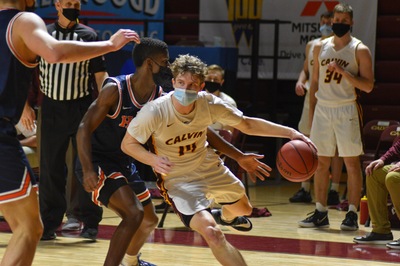 After an extended break, the Calvin men’s basketball team has been thrust back into action, playing six games within the last two weeks. They are off to a 3-3 start, their last game being a tough loss to Hope College on a last-second free throw. Despite the latest loss, the team displays an impressive balance of newcomers and returning contributors on its roster.

Headlining the returnees is senior guard Thad Shymanski, who leads the team in scoring and assists, averaging 19 points per game and five assists per game, shining in his final season. Newcomers have also been vital for the team as they start two freshmen and a transfer sophomore.

Luke Scheffers and Uchenna Egekeze, the two starting freshmen, are averaging seven and eight points per game respectively, with the latter growing in notoriety after his game winning three against Olivet.

Another standout newcomer has been sophomore center Brandon Paul, who was a transfer from Grand Valley State University. He is averaging 12 points and seven rebounds per game through six games. The Knights lost a lot of frontcourt depth, however, with the departure of seniors Derrick DeVries and Alex Bos, but with the addition of Brandon Paul and the emergence of junior forward Jordan Katje, they have started to make up for what they lost.

The season has not been without its challenges due to COVID protocols and various injuries, but the team is in a good spot. Junior guard Jacob Williams spoke on how the team has performed so far, saying: “I think we’ve played relatively well this season, given the conditions we’ve been under with the COVID situation. I definitely think we can be playing a lot better though. Our team has a lot of potential, and we’ve been facing a lot of adversity lately, including injuries.”

The team is motivated to band together and continue to make improvements and pinpoint specific areas with potential for much growth. Williams said, “I think a few of our bench guys will gain some more confidence going forward and get into a good rhythm. We’ve been talking about that a lot lately. Keeping our morale up and coming closer as a team will definitely help us to get that done, and I think it’ll be a huge difference maker for our team’s performance.”

The team is not satisfied with their 3-3 record and are eager to continue to compete. The Knights are currently fourth in the MIAA with an upcoming game this Saturday against the winless Olivet Comets at 3:00 p.m.