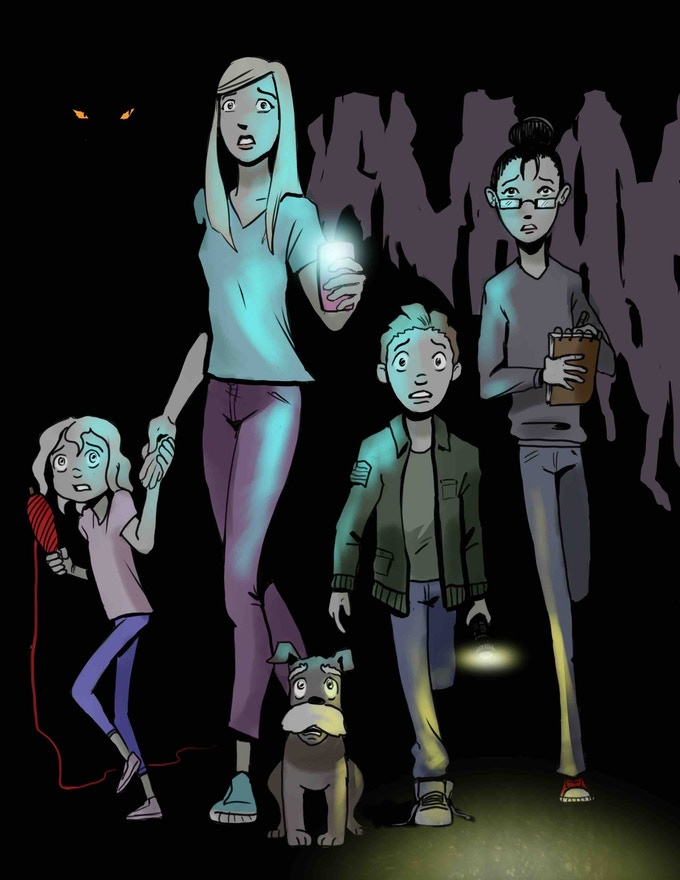 Several of the main characters in The Undergrounds.

Like “Chronicles of Narnia” without the allegory, “The Undergrounds” is a visually engrossing, child-friendly adventure that celebrates the importance of family and the power of imagination.

Written by Geert Heetebrij, assistant professor of film and media here at Calvin, and drawn by freelance illustrator Jonathan Lareva, the novel’s launch was successfully funded by a Kickstarter campaign, which described the novel as “an all-ages fantasy adventure.”

The family at the center of the story is a very conventional one: the father is the breadwinner, struggling with standing up to his boss and gaining respect from his wife, the mother conforms to superhero-movie female body standards and does all the cooking.

The oldest daughter, Lauren, is attached to her cell phone and disappointed to find that their new home has no cell service, preventing her from connecting with her boyfriend, Mark. Her younger sister, Elyse, is afraid of “creepy-crawlies.” The middle daughter, Claire, is a bookworm with a big imagination, and the only son, Rob, likes to explore and pull pranks. The children argue in typical sibling fashion but also deeply care about each other.  The adventure draws them closer as they seek to follow their father’s advice: “You’re family. Take care of each other.”

The family discovers a hole in their backyard which leads to a realm where elaborate stories are being written and played out across worlds. Accidentally angering the pirate king of one of those stories, the family must work together to take control of their story and save the day.

At its heart, it’s a story of competing narratives, and fans of Dungeons & Dragons or other role-playing games will love how the characters are imaginatively involved in the shaping of the story both as it is written and as it occurs.

The drawings add clarity to the sometimes-tangential plot and capture the wonderfully whimsical realm of story. The worlds are separated by color palette, which provides a delightful sense of discovery for the reader as each new one is revealed.

“The creative process here,” Heetebrij said of his collaboration with Lareva, “is a lot like that of a cinematographer storyboarding scenes: the artist senses intuitively what the essence of any given scene or moment is, and then chooses the best cinematography (What camera angle? How close? Which lighting?) to communicate that moment.”

The novel is based on a series of bedtime stories Heetebrij told to his real-life children, and the episodic plot reflects that. “My children and I had fun with it,” Heetebrij said, “They’d mention some random item or character and then I would weave that into a story–or sometimes we would switch, and they would make up the story.” Faced with writing a new screenplay every semester in graduate school, Heetebrij took his children’s advice and turned “the tunnel stories” into a script.

The fairy-tale worlds the family stumbles into are rife with danger, but the focus on the excitement of problem-solving and discovery prevents the story from becoming too frightening for young children.

“The Undergrounds” isn’t just for children, though. C.S. Lewis once said, “Someday you will be old enough to read fairy tales again.” If you’re missing the days of magic portals, good guys winning, and talking animals—or are just looking for an entertaining study break—then “The Undergrounds” is for you.