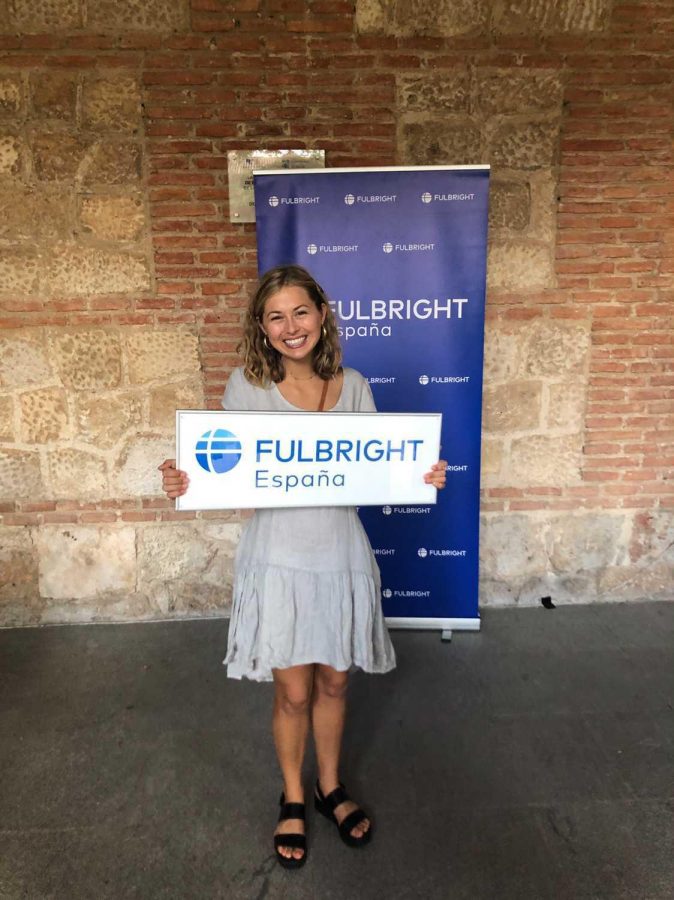 Amelia Sterenberg, a Calvin graduate of 2019, had been living in Spain for 6 months thanks to a prestigious Fulbright Scholarship–until it all suddenly dropped out from under her feet.

In late March, COVID “spread like rapid fire [across Spain]… it was everywhere within five or six days” of the first confirmed case in the town in which she lived, Sterenberg told Chimes. Before a week passed, she was back home in Arizona.

The Fulbright U.S. Student Program is a highly competitive scholarship facilitated by program advisors at colleges across the country. The program is for college students and alumni who are not currently enrolled in or have applied for any post-grad programs or grad schools.

Although the Fulbright application process is long and complicated, TenHuisen said that it hasn’t changed much because of COVID. None of the process was ever in person, so the only difference now is that host countries use Zoom or Microsoft Teams, when they had been using Skype. Craig Hanson, associate director of honors and collegiate scholars, added that this may have been an upside for applicants, since they are now fully comfortable with online meetings.

Unfortunately, the application process is the only part that hasn’t changed. TenHuisen mentioned that Jason Entingh, a Calvin student who was awarded a Fulbright for this year, has not yet left for his time abroad.

His departure was first delayed until January and could be postponed yet again. TenHuisen wasn’t sure how long it will be until scholars are allowed to really participate in the program again, speculating that it won’t take place until a vaccine is widely available.

For students who had to come back to the US, like Sterenberg, everything changed very abruptly. “In my head, [the lockdown] was going to be two weeks, they were going to figure out some stuff, and we were going to go back,” said Sterenberg.

Suddenly, the Spanish Fulbright Commission strongly encouraged Sterenberg and her fellow scholars to go home after the country went into lockdown. Sterenberg was left with no time to say goodbye to friends and teachers.

“There were police on every corner… I snuck out on Sunday…to say goodbye to a teacher,” Sterenberg said.

After a very quick goodbye, she boarded a plane where some of the other passengers were wearing hazmat suits.

Sterenberg felt that the Spanish Commission did much better with the sudden transition than other countries had. They covered the cost of her return flight and continued to pay monthly stipends since she was still teaching over Zoom. Fulbright scholars in other countries weren’t so lucky.

The sudden end cut off relationships that Sterenberg was forming. “I feel like those three and a half months more would have solidified friendships that I was building with people in the community. I was just starting to feel like this was my home.”

Still, she feels that leaving was the right thing to do. Dealing with COVID-19 was easier once back in the U.S. “Navigating that whole thing in a foreign country would have been very challenging,” Sterenberg said. Her future plans were not affected, since she had already decided to return to Arizona for grad school. And though it was cut short, Sterenberg said she will always “really cherish” her time in Spain.