Everything you need to know: Kent County Ballot 2020 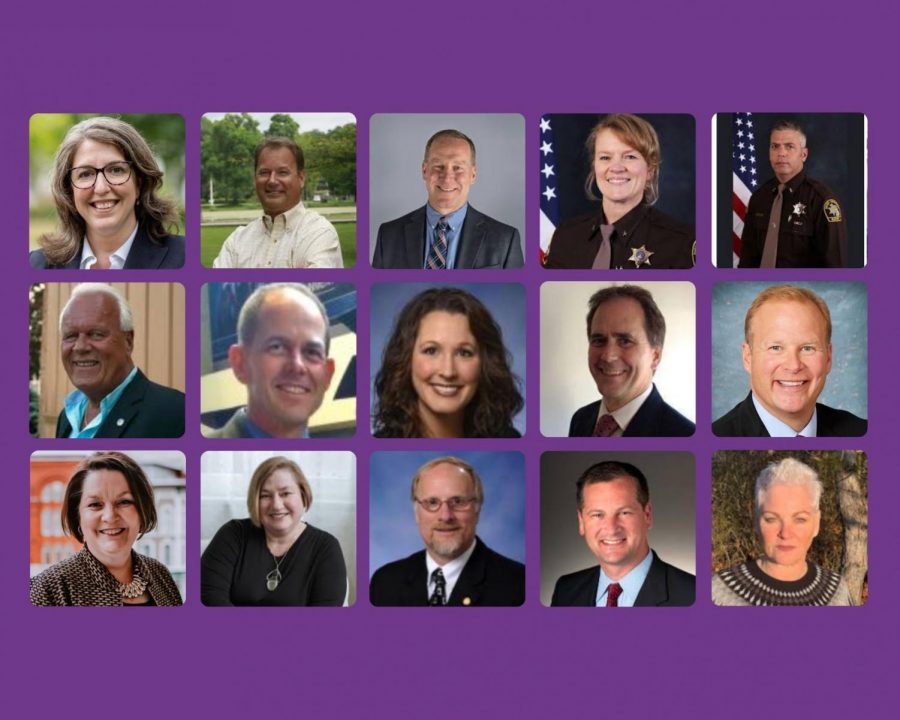 Kent County 2020 candidates. All photos are supplied by the candidate they represent.

Michigan State Legislature Representative: According to https://www.house.mi.gov/citizens.asp, Michigan Representatives are elected every two years and will introduce and vote on over 4,000 bills during a two-year period. Each representative represents a district of 77,000 to 91,000 residents and there are 110 representatives total.

Rachel Hood is the Democratic candidate and the incumbent. According to her website, she wants to put Michigan’s economy back on track by fixing UIA, creating living wage jobs, and supporting employers through COVID-19. Hood also plans to improve access to affordable health care, improve the state’s education system, and create opportunities for all.
Doug Zandstra is the Republican candidate. A Calvin grad of 1992, he told Chimes that a major policy goal is to promote legislation that helps instead of hurts small businesses. Short term, he wants to help the education, the public health, and the unemployment system get through this pandemic. Long term, he wants to improve health care policies for Michigan, reform the justice system so it is not a burden on taxpayers, and improve education opportunities.

Sheriff for Kent County: According to Kent County Administration, the Kent County Sheriff’s responsibility is both criminal and civil enforcement, which includes the detection of activity as well as the investigation of reported incidents. In addition, the Sheriff maintains the center for emergency call answering and the jail for Kent County, both of which are taken care of by different departments and overseen by the Sheriff.

Michelle LaJoye-Young is a Republican and the current sheriff, as well as Kent County’s first female sheriff. According to local news, she has been in law enforcement since 1989 has fostered a “culture of service” in her staff that brings about “compassionate and empathetic public service.” She believes we must continue working together as a community to heal racial divides.
Marc Burns is the Democrat candidate. According to local news, he has worked in law enforcement since 1990 and wants to bring back “transparency, accountability, and professionalism” to the office of Sheriff. He stated that ending police brutality and injustice is the main priority and that all voices must be heard.
John Stedman is a Libertarian candidate. In an email to Chimes, he said that the disconnect between citizens and officials is the most pressing issue he sees, and if elected he would actively encourage citizen’s participation and feedback on policies. He believes that he is the best candidate because he will bring a fresh approach to law enforcement that will be better than ingrained ideas from years on the force.

Clerk & Register of Deeds: According to Kent County Administration, this position records all documents involving real property in Kent County, including deeds, mortgages, land contracts, and other documents concerning real estate. The Clerk/Register also provides information to the public regarding real property and develops new ways to improve access to such information.

Devin Ortega-Furgeson is the Democratic candidate. According to his website, he wants to put trust back in the American Electoral System, embrace our “melting pot” and bring back working together across communities. Some of his top agenda items are election reform, access to online county services such as a bilingual platform and an online payment system, criminal justice reform, and diversity in county offices.
Lisa Posthumus Lyons is the current Clerk/Register of Deeds and the Republican candidate. She told Chimes that she is planning on implementing new campaign finance management software for elections as well as the e-filing of court records and continuing to ensure that citizens can interact remotely. Lyons also said that the most important issue to her right now is the secure and transparent administration of elections in the current political climate.
Jamie Lewis is the Libertarian candidate. According to his website, he has lived in Kent County for more than 30 years and is passionate about protecting our freedoms. Some of his top issues are rank choice voting, in which a voter ranks their favorite candidates rather than them running “against” each other, no reason absentee voting, and ending taxpayer funding of political parties.

Treasurer for Kent County: According to Kent County Administration, the treasurer is elected to four year terms and is responsible for receipting, recording, and investing all money deposited within the county. They also collect and manage delinquent taxes and their paying forward.

Peter MacGregor is the Republican candidate and current state senator representing the 26th district. According to local news, MacGregor wants to serve his community in ways including helping improve foster care and child protective services, as well as working with taxpayers to help them “keep their head above water” in these trying times.
Beth White is the Democratic candidate and former corporate counsel of Kalamazoo County, a job from which she was terminated. According to local news, White then filed a lawsuit claiming violations of the Whistleblower’s Protection Act, among others. She is running because she believes that it is time for “every skilled, ethical person to get off the sidelines and participate in our democracy.” She also wants to work for taxpayers to help them keep their homes because foreclosure hurts the whole community.

Drain Commissioner for Kent County: According to Kent County Administration, the drain commissioner oversees and maintains over 536 miles of county drains and 356 stormwater detention ponds throughout Kent County. Drain and runoff maintenance involves ensuring that flooding does not occur in heavy rains, water that pools is returned to the system as pure as possible, erosion does not get out of control, and many other areas involving water.

Elaine Isely is the Democratic candidate for drain commissioner. She told Chimes that she believes that we need a drain commissioner who better understands how this job can control the problems that affect both our land and water systems. Isely has fifteen years of experience working in water resource management as well as a degree in biology and natural resource management. She is passionate about water issues and wants future generations to have access to clean and safe water.
Ken Yonker is the current drain commissioner and Republican candidate. He told Chimes that he plans to continue training his staff for diversity and inclusion, establish an asset management plan for each of the drains, and tackle the problem of the high volume of contaminants flushed into the drains. He believes that the job of drain commissioner requires knowledge of the intricacies of the job and respect for the laws.

County Commissioner for the 19th District in Kent County: According to Kent County Administration, the Commissioners are elected for two year terms. Their responsibilities include adopting the annual county budget, raising the money to fund the county’s operations, approving county residents to serve on various county boards, and determining the sites of county buildings, among others.

Phil Skaggs is the Democratic candidate and current county commissioner. He told Chimes that his top policy goals are to modernize waste management, expand and improve our park system, ensure safe water, and implement significant reforms such as updating our criminal justice system and crafting policies to preserve farmland and encourage smart growth in cities.
Cris Birdsong is the Republican candidate. In an email to Chimes, she said that her four decades of work in planning, zoning, and development and degrees in architecture, engineering, and landscape architecture will help her implement effective policies. She wants to work on issues such as lack of affordable housing, recycling demand, and aging infrastructure by eliminating burdensome regulation.