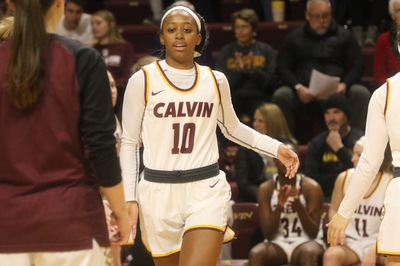 Junior Stephanie Coors is one returning member of the varsity team

While the women’s basketball team was fortunate enough to retain many of the players they had last year, every other aspect of the 2020 season has looked much different. COVID-19 has reshaped practices, games, and team gatherings.

“Outside of all of the social limitations and the emphasis on health and safety protocols across our lives, the biggest change we’ve faced so far in our basketball season was the change of start dates from Oct. 15 to Oct. 1,” Coach Mark Christner said. The familiar timetable that coaches and players are accustomed to has shifted, and the social distancing restrictions has created a new dynamic..

The inter-team relations have looked different this year. Junior guard Baylee Galan Browne expressed how the biggest difference for her and other players alike has been “the sense of camaraderie we would normally get both on and off the court. We were not able to bond like we normally would for the first month of school in open gyms and such since the facility wasn’t open. We also aren’t able to chat as much in the locker room since only a certain amount of us can be in there at a time.”

Usually practices are a space where the team is learning and growing together, but this year, they have had pod practices where players practice in small groups. They have been unable to have five on scrimmages, which typically present opportunities for lineups to evolve before actual games.

However, there have been some benefits to certain restrictions. Galan Browne said, “Since we haven’t had the chance to practice full five on five contact until this week, we have spent a lot of time working on individual skills and our individual game a bit more which I think isn’t focused on enough in collegiate sports.”

Players echoed this. “It’s been kind of cool to get the opportunity to fine tune my mechanics as well as help the growth of my teammates skills while in season as these would typically be things that would be done individually in the off season,” Galan Browne said.

This new style has also allotted coaches more individual valuable time with players. Christner said, “We have shifted gears from really working on Xs and Os to connecting with our players in various ways. Their mental health is so important to us. So 1-1 meetings outside or just a longer text thread are ways we can continue to show our players that we care for them as people first.”

Despite the setbacks, the team is optimistic. Christner is especially excited because they have over 75% of our minutes and scoring back on the roster this season.

Christner said, “I like our versatile parts, especially in the backcourt and we have two all league returners in the frontcourt. Our goal as a staff is always to develop a consistent bench and we have a few hungry upper class players who will get a chance to play.”

“Our program is a lot smaller this year, but we have quality players on all fronts, and I think that regardless of how many games we get we will be successful as the encouragement we all have for each other has been awesome” said junior forward, Stephanie Coors.

The team currently has two upcoming games in November, but the league schedule has not been released yet. Without having played a game in about eight months the team is itching to play again.

With all the obstacles that have been at play this season, the team is excited to use it as motivation. Galan Browne made it clear how enthusiastic the team is as she said, “I think I can speak for all of my teammates when I say the world better watch out when we are given the green light to play, because the anticipation is on the verge of boiling over.”