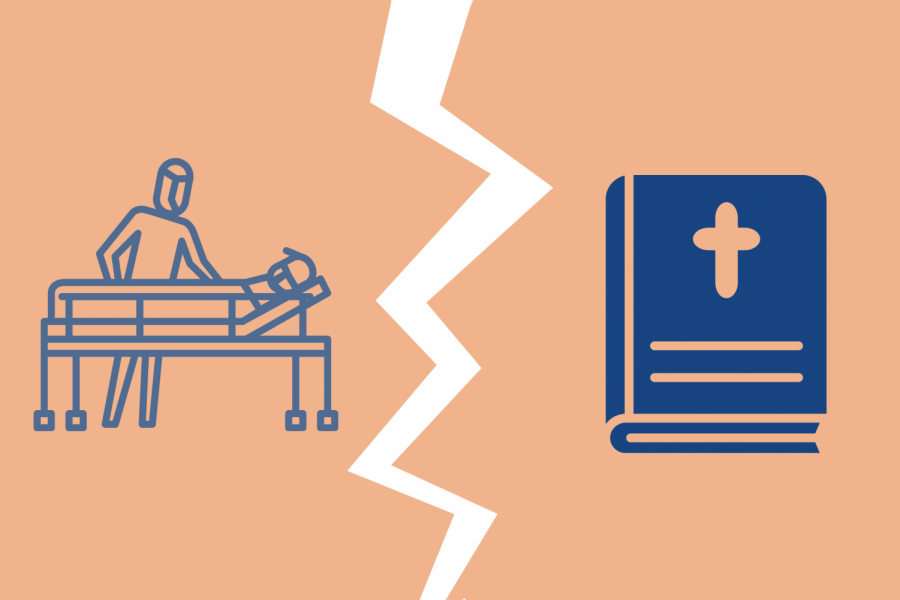 Chaplains were unable to go into patients' rooms in early March and April.

As the number of U.S. COVID-19 patients grew, the doctors and nurses who cared for them were rightfully celebrated. Less mentioned were the chaplains who chose to stay at the hospitals, despite uncertainty and anxiety about contracting the virus.

Mid-March, as lockdowns were established, Reverend Marc Zumhagen and the other chaplains at the Cincinnati Children’s Hospital had to decide whether to counsel remotely. It was still uncertain how COVID-19 affected children, and the staff did not want to become infection vectors.

Ultimately, they decided to continue their ministry in person. “We’re still showing up for the people that God has called us to minister with and to,” Zumhagen said.

Likewise, Rev. Dirk Van Der Vorst, a chaplain at the Denver Health Medical Center, said that working remotely was never a question. “I knew I was called to be on the frontlines. It’s my calling and vocation. There was no question about it.”

Van Der Vorst, Zumhagen, and Reverends Rhonda Workman and William Jensen are all CRC chaplains. All four attended Calvin Seminary, and all four served in person, as the pandemic raged.

Workman serves at St. Mary Mercy Hospital in Livonia, Michigan. Near Detroit, the hospital is close to many nursing homes that were hit hard by the virus. Because of the virus’s early entry into Michigan, the hospital administration was unable to secure enough PPE for the chaplains to be fully protected.

As a result, Workman and the other chaplains had to remain outside of the rooms until late April. “The fear on the floor was palpable,” Workman said.

St. Mary Mercy had freezer trucks outside the hospital to accommodate the deaths. According to Workman, workers were taking out 20 bodies at a time. It wasn’t unusual for two or three family members to be in the hospital for COVID-19 at the same time. Workman described a security guard breaking down in tears after unloading so many dead bodies.

Recently, the St. Mary Mercy chaplains team wrote 300-350 bereavement cards for the families of the deceased.

Although Jensen did not face the same PPE shortages at University of Colorado Hospital, anxiety about the virus was just as present among patients and chaplains alike. He recalled coming into work and noticing that he and every one of his coworkers had shaved their beards to make mask-wearing easier.

Jensen and Zumhagen both have kids at home. Early on, they would change in the garage and head straight to the shower before interacting with their families.

“A lot of those weeks in the height of it, it was heads down and keep going,” Jensen said.

All of the chaplains reported that their hospitals suspended all visitors for patients, except for children, patients with disabilities and those close to death.

The effects of isolation varied for patients; if they were sedated and hooked up to ventilators, they didn’t notice, according to Van Der Vorst. “For those who were conscious, some had to face the possibility of dying or death for the first time in their lives.  Especially if they were young… Some patients were really scared because they had never been confronted with their limitations,” Van Der Vorst said.

For families of the patients, the time apart was especially hard. Workman reported visiting each patient before calling their family, so that she could give them an honest assessment. “I wanted to be able to say, ‘I just saw your wife. She’s comfortable.’ And after that, [the family members] just break down crying,” Workman said.

For the Cincinnati Children’s Hospital, COVID-19 was not a physical threat to the children, but rather an emotional for their parents, who were now cut off from support services. “[Parents would say,] ‘It’s just me and their mental illness or it’s just me and their disability. There’s no more support,’” Zumhagen said.

The chaplains coordinated iPads and phone visits between patients and their families, in order to combat the sense of isolation. Zumhagen was amazed at the levels of care and reflection that could take place over the phone. Likewise, Workman remarked how grateful people were to receive a phone call and that even those who were not religious would still receive a prayer.

In addition to patient and family ministry, staff support ramped up greatly to account for the sheer amount of death and the constant uncertainty. “Doctors were cracking because they had to be the ones to pray with the patient because we weren’t allowed in,” Workman said.

The staff at St. Mary Mercy are doing resiliency training to work through the grief from the pandemic. Workman has gotten quite angry after seeing anti-mask protesters gather at the state capitol. “We were seeing so many deaths and so many people dying,” she said.

All the same, Jensen sees reason for hope in the doctors’ and nurses’ dedication to patient health. “It’s inspiring to see that sense of calling and duty and love and compassion,” he said.