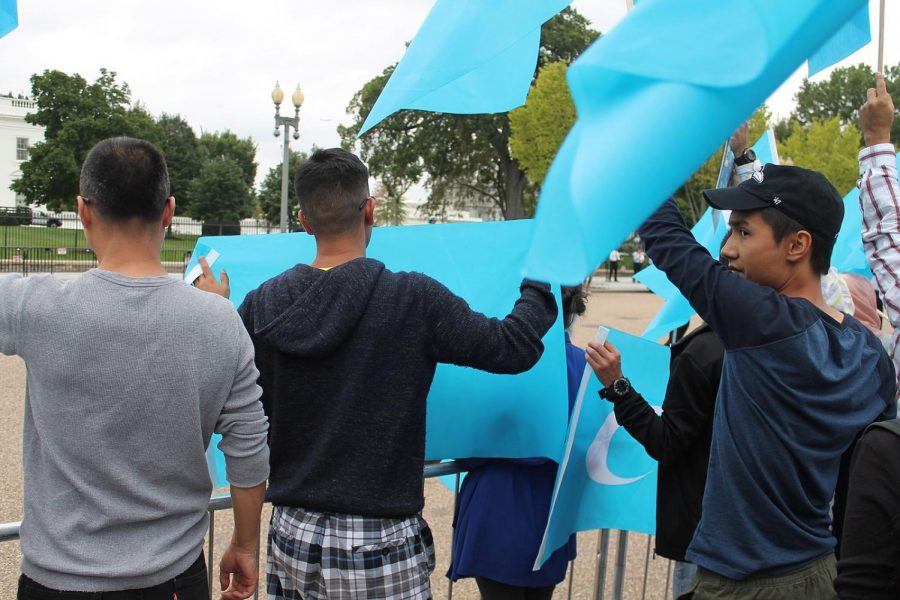 Protesters advocate for Uyghurs outside of the White House in 2015

Infographics about the Uyghur genocide in China have been making rounds on social media in the past few months, but, like so many other global issues, it tends to get lost in the COVID shuffle. According to Calvin student Blerta Lika, it’s past time the US starts paying attention.

Uyghurs are an ethnic group making up 46% of the population of the Xinjiang region in Northwestern China, who, according to the Hong Kong based Uyghur Human Rights Project, “practice a moderate form of Sufi Islam and lead predominantly secular lives.” An influx of Han Chinese into the area increased discrimination against Uyghurs, which has intensified into horrific levels of persecution over the last eleven years, especially burgeoning since 2016.

Government crackdown on riots in the province’s capital in 2009 left 200 Uyghurs dead, and the 2014 commencement of China’s “Strike Hard Campaign against Violent Terrorism” has sought to justify mass detention and persecution. According to Calvin alumni Nathan VanderKlippe, a foreign correspondent in Asia for the Canadian newspaper Globe and Mail, “an extensive network of prisons, factories and centres for forced political indoctrination are used to incarcerate and control large numbers of people – and serve as a deterrent to those who might voice opposition to local policies.”

VanderKlippe, who has visited Xinjiang, also said “authorities use many layers of surveillance and public security to maintain tight control of the population, and in particular those who are Uyghur.” Technologies at work in the province include networks of surveillance cameras, “convenience” police stations, digital communications monitoring, call and app monitoring, smartphone scanners that detect religious and/or cultural content, and a developing “pre-crime” policing system made possible by computerization.

The Uyghur Human Rights Policy Act was signed by President Donald Trump this July, which may result in sanctions against some Chinese officials, but many think the U.S. should be doing more. VanderKlippe said, “It’s not clear the Uyghur Human Rights Policy Act on its own has had any effect, although international opposition to China’s policies in Xinjiang is growing.”

“Not only hasn’t the U.S. done enough to intervene,” Calvin student Blerta Lika added, “it might have actually helped this conflict.” Lika cited possible U.S. prior knowledge of re-education camps, U.S. administration’s focus on trade rather than human rights, the credence that the U.S. ‘War on Terror’ gave to the Chinese response to protests in East Turkmenistan, the U.S.’ own treatment of Muslims since 9/11, and rising Islamophobia around the world. She also mentioned that she appreciates the Western countries that have come forward to condemn the persecution.

Lika grew up in Albania, where 70% of the population, including her own mother, identify as Muslim. Lika said hearing Muslim voices defending their rights is good, “but hearing a Christian talking about this would be great…people should be there for each other, even if it doesn’t affect them directly.”

Lika is also a founder of Calvin Interfaith Alliance, which aims “to engage the diversity of religious thought and advocate for students who may feel as though they are minorities in their worldview on campus.”

“If we all had felt respected and welcome enough,” Lika said, “we probably would not have needed to found this organization. However, I think Calvin is supportive of students who want to make change.”

Calvin may not have influence over the ongoing persecution in China, but administration and students have a say in whether Islamophobia will be tolerated here on campus. “I do not expect Calvin to do something about segregation in China,” Lika said. “What I always wanted from Calvin is to respect our religion, our beliefs, and from my freshman year to my junior one, I believe I do see change, and I am thankful.”

What can you do? “Talk about this in public,” Lika said, “make sure to inform people who don’t know about this, and give courage to other people to react.”