Pence rallies in GR: “The road to victory runs right through Michigan” 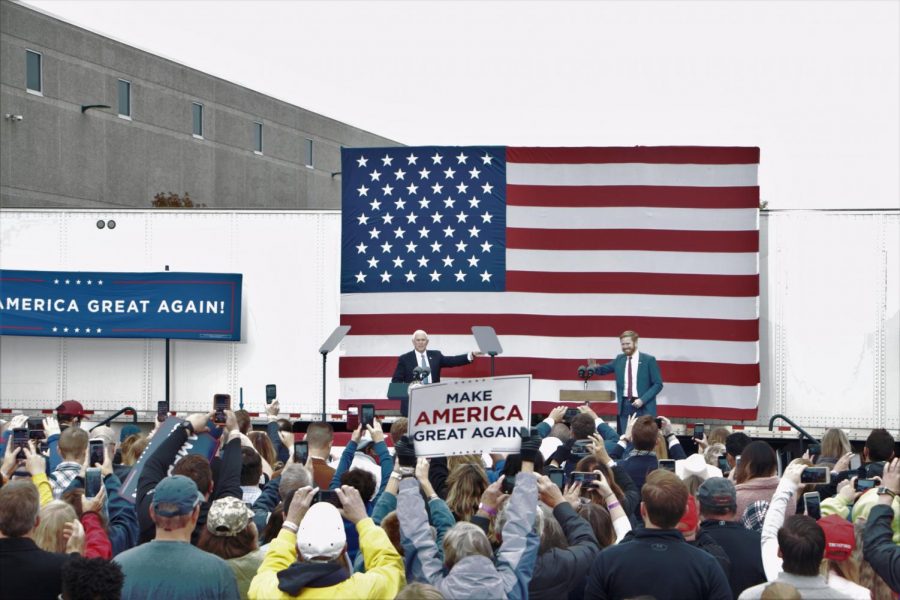 Mike Pence and Peter Meijer stand in front of a crowd at Lacks Enterprises.

Donald Trump and Mike Pence held the final rally of their longshot 2016 campaign in Grand Rapids, Michigan in the early hours of Election Day 2016. On Wednesday, Oct. 15, Pence returned to Grand Rapids to try to inspire the same upset victory with just 20 days until Election Day 2020.

Pence recounted the 2016 rally to a crowd of about 250 people at the auto parts manufacturing center Lacks Enterprises, where he also emphasized the administration’s record on trade deals and manufacturing jobs.

According to Pence, the enthusiasm and size of the 2016 Grand Rapids crowd was encouraging to Trump, who was considered the underdog. Pence said that after they left the stage at DeVos Place that night, Trump told him, “I don’t know about you, but this doesn’t look like second place.”

Pence expressed confidence that Michigan would once again help deliver an upset election victory for the Republicans.

“All the polls back then, kinda like now, didn’t look so good,.” he said, acknowledging that Trump has consistently been polling significantly lower than Joe Biden nationwide and in Michigan.

To attend the rally, supporters were temperature-checked, but masks and social distancing were not required. The majority of the crowd was maskless.

Pence complimented Mejier, encouraging attendees to vote for him and other Republican candidates including John James, Fred Upton and Bill Huizenga. Huizenga was scheduled to appear at the event but tested positive for Covid-19 during his entrance screening. Expressing his hope for Republican majorities in both chambers of Congress, Pence urged voters to help the GOP “retire Nancy Pelosi once and for all.”

Throughout his speech Pence made many appeals to Christian voters. He recalled how Senator Diane Feinstein said “The dogma lives loudly in you.” to Judge Amy Coney Barrett about her faith.

“Well I got a message for the Democrats and their Hollywood friends: that dogma lives loudly in me” Pence said. He added, “People of faith have no greater champion than President Trump.”

Some of the loudest cheers of the afternoon came from Pence’s remarks about the sanctity of unborn life.

Pence talked about Trump’s job creation record, saying “We created the greatest economy the world has ever known.” He talked about the new USMCA trade deal, claiming “Joe Biden never lifted a finger to reform NAFTA.”

Speaking about the coronavirus pandemic, Pence said “We will eradicate the China virus for once and for all.”

Pence also claimed that there will be hundreds of thousands of vaccine doses available by the end of the year.” Hours later, Dr. Fauci, the nation’s top infectious disease expert told CBS news that such a timeline is not realistic. “For a vaccine that is proven safe and effective, it’s not going to be 100 million doses,” he said, expressing that a vaccine might be widely available by April of 2021.

Pence also addressed the topic of race relations and policing. “We’re not doing to defund the police. Not now, not ever,” he said. He also said that people don’t have to choose between supporting law enforcement and African-American communities.

During his speech, Pence attempted to paint Biden as an enabler of far-left ideologies. “Joe Biden has been a cheerleader for communism all the way,” declared Pence while talking about trade with China.

Pence said that, “Joe Biden would be nothing more than a Trojan horse for the radical left,” regarding healthcare and vowed that the Trump administration would not let America become a socialist country. “In less than three weeks we’re coming to a time of choosing” said Pence.

Both campaigns are heavily invested in winning Michigan, and particularly interested in Grand Rapids. Biden held an event in Grand Rapids two weeks ago, and his wife Dr. Jill Biden visited in September. As of October 13, FiveThirtyEight estimates that Michigan is the fourth most likely state to be the “tipping point” that delivers the 270th electoral vote needed to win.

Note: Peter Meijer is running against Democrat Hillary Scholten for the MI-03 Congressional Seat. Scholten is married to Chimes advisor Jesse Holcomb. Holcomb did not have any role writing, reviewing or editing this piece.