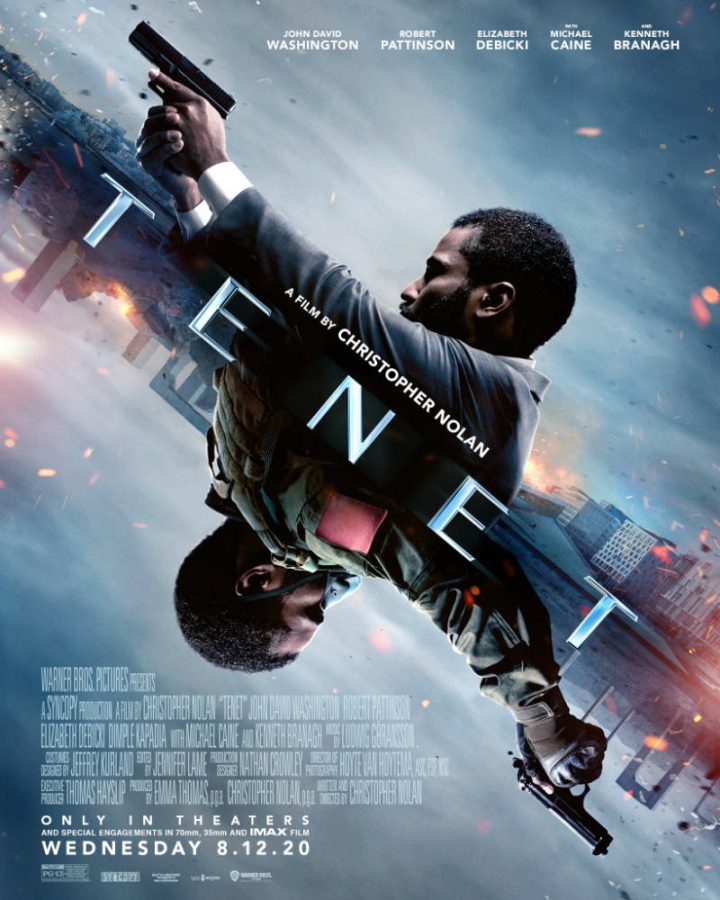 “Tenet” is a Christopher Nolan film. That may be a simplistic description, but it’s strikingly accurate. It’s polished, extravagant, intriguing, and entertaining: a textbook blockbuster, and yet intellectually a cut above. Nolan is a writer who likes to play with the chronology of his scripts, twisting it around just enough to keep viewers interested without fully losing them in the confusion. He has done this time and time again in films like “Memento,” “Inception,” and “Interstellar.” But where these previous films have explored amnesia, the labyrinth of the mind, and the space-time continuum, “Tenet” creates its own laws of reality and adheres to them flawlessly.

Although the film is best enjoyed with little expectation of what’s to come, the basic plot is as follows: the Protagonist, as star John David Washington is listed in the credits, is an operative for a United States intelligence agency, sent on a mission of utmost secrecy to prevent a worldwide catastrophe. Though this plot summary is as basic as spy thrillers come, what is far from basic is the central focus of the film: inversion. In the world of the film, a new technology has been discovered: items which have inverted entropy, i.e. they travel backwards in time. The Protagonist must find the origin of these inverted objects to prevent them from being used for evil. What unfolds is an extremely complex yet unconvoluted plot with multiple timelines. Often in films like this, there will be at least a few discontinuities for which viewers must suspend their disbelief, but “Tenet” is airtight — perhaps its only downfall

The weaknesses of “Tenet” fall in two places and two places only, the first of which is a strikingly unsatisfying ending which leaves an altogether bland taste in the viewers mouth, despite the blinding polish of the first two acts. The film ends by tying up its loose ends; the several timelines of the film converge in a crescendo of action, but when the final note is sung, all that remains is silence. Such a conclusive ending leaves the audience with nothing to ponder. Nolan’s other films end ambiguously, leaving the audience to contemplate both the plot of the film as well as some philosophical idea. Endings like these have an inherent advantage. They leave the audience begging for more, exploiting the compulsive human desire for answers. “Tenet” gives the audience exactly what they crave, placing the last piece in its puzzle of a plot, but no one will leave the theater with any existential questions; there is no endlessly spinning top or unreliable narrator.

The second is its incoherent sound mixing. The blaring score from Ludwig Göransson, the man behind the award-winning score of “Black Panther,” sometimes drowns out the dialogue with its endless “Inception” style BRAAM-ing. This is especially problematic in a film with such a complex plot, where hearing one or two lines can be the difference between enjoying the film or being lost for the next twenty minutes of action. Other times the dialogue is simply too quiet compared to the ambience of the scene. In one scene near the start of the film, two characters are having a conversation as trains pass by, and the dialogue can be hard to make out over the clangor of the railroad tracks. Still, the dialogue is not unintelligible to the point of getting lost.

Though these weaknesses may seem fatal, “Tenet” is still among Nolan’s greatest films. The auditory issues are certainly disappointing, and the ending might not stick with you for weeks on end, but as blockbusters become more pandering, it’s refreshing to see some directors still challenging audiences with something more substantive.

Nolan’s appeal is that he produces fun films with a brain, films that give general audiences the adrenaline-fueled action they crave without explaining every detail. There’s a growing divide between “action” and “art” in popular cinema, a false dichotomy which directors like Nolan help to break down, one blockbuster at a time.