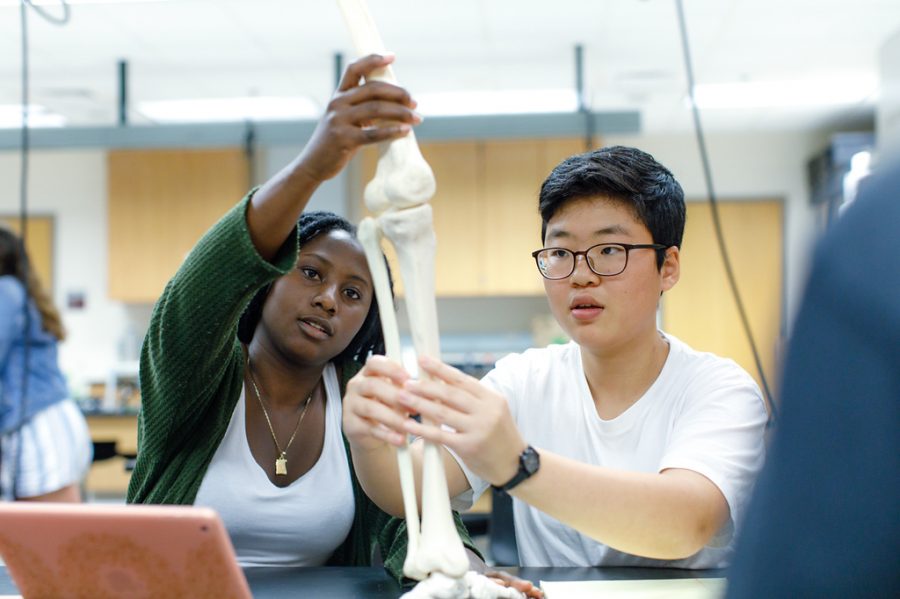 The male-dominated culture of science can make it difficult for women to thrive.

For the first time in history, two women were awarded a joint Nobel Prize in chemistry on Oct. 7, 2020. Jennifer Doudna and Emmanuella Charpentier’s work on CRISPR, a revolutionary genome editing technology, demonstrates the inroads that women have made in the sciences—as well as the challenges that still exist.

“It has a lot to do with the culture of science,” biology professor Amy Wilstermann said. “For many years it was a culture set up by and for white men. That’s who the predominant people in the field were, and it was a challenge for women to break into that predominantly male world.”

There is still a significant difference between men and women in biological and chemical science graduate programs and professions. According to the Open Chemistry Collaborative for Diversity Equity (OXIDE), women earn about 50 percent of bachelor’s degrees in chemistry and 40 percent of masters and doctorate degrees. Yet women only hold 20 percent of chemistry professorships nationally. At Calvin, 3 of 12 chemistry faculty positions are held by women.

“Formal mentoring is not even across genders,” chemistry professor Carolyn Anderson said. “Everything from conversations in the bathroom onward–men just have different access to faculty members than women. You have to make your own way. You have to do more to get noticed in the same way as your male colleagues.”

Anderson earned her PhD at the University of California-Irvine, but students at Calvin have experiences similar to students at larger institutions. Isabel Johnson, a senior studying biochemistry and psychology, plans to pursue neuroscience at the graduate level.

“My advisors were both men for the first two years, and the advice they gave was always laser-focused on graduate school,” Johnson said. “They never considered how approaching graduate school is different for a woman than a man. I’ve had a female advisor for the last two years, and our conversations have included issues women talk about more, like having a family.”

Notably, biological fields like biochemistry—the field in which the 2020 Nobel laureates work—and medicine have become more open to women; women comprised a majority of medical school matriculants for the first time in 2019, according to the American Association of Medical Colleges.

“There have been multiple explanations for why there are more women in the biological fields,” Anderson said. “Some people argue that because biology is more animal-based it’s more comforting and nurturing, and that’s why women are attracted to it. But in reality that’s just ascribing to traditional gender roles.” The reality of why women are underrepresented in these fields is messy, according to Anderson.

Much of the gendered nature of the field arises from who the field’s giants are, Anderson noted, and in organic chemistry it’s still overwhelmingly white men. Those individuals establish the nomenclature and set the standards for the profession, including the unhealthy requirements for graduate program completion.

“Organic chemists are crazy. There’s just no other explanation,” Anderson said. “Graduate school is never easy, but we would often have 70 to 80 hour work weeks. That was the expectation. That sort of lifestyle leads you to really question your work, to ask is it worth it, and is it really safe to do what I’m doing?”

Johnson explained how thoughts about starting a family and having kids have affected her career directions: “I want to have kids and a family. But I’ve had to do a lot of thinking about whether or not it’s worth it.”

She said that women often end up taking a decade-long hiatus from their career to start families.  “It’s hard to justify going through graduate school to work only four or five years before having kids. For men, their career is their future. Grad school is the only option for a scientific career. ” For women, it’s more complicated.

There is also institutional bias against women in scientific fields. Wilstermann noted how, when one of her graduate school colleagues got pregnant during her graduate studies, the male principal investigator said that all of his female students should be on birth control.

Wilstermann’s own female graduate advisor told her she would not be able to have children until after her PhD, post-doc, and receiving tenure at an academic institution.

“These are just conversations that men don’t need to have,” Wilstermann noted. In her family, she was able to complete her graduate degree and start her academic career because her husband was a stay-at-home dad. Having a stay-at-home parent, however, isn’t a viable option for all families.

“Women are pushed to be everything—a mom, a teacher, a researcher,” Wilstermann said. “But it’s impossible. You can’t give yourself 115% to every part of your life, all the time.”

Rachel Harmon, a senior studying biochemistry, biology, and Spanish, has experienced the societal pressure women in the sciences face; she’s had long conversations with friends and family about the perceived conflict between her familial role as a woman and her career.

“In the end, though, you just need to decide what to be, whether it’s a doctor or a scientist or a mom,” Harmon said. “It’s your decision, and the fact that it’s your decision and your life should empower you.”