Fridays are for “The Boys” 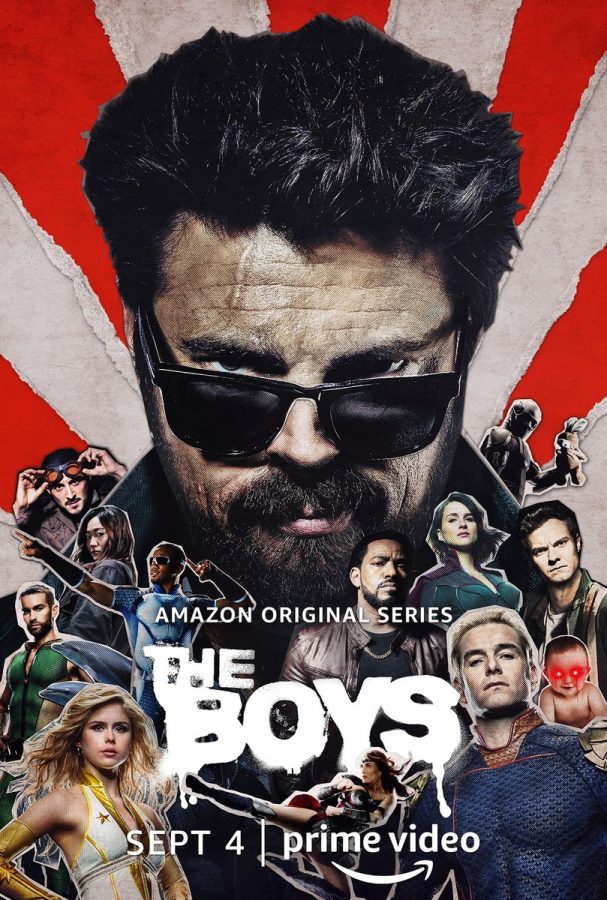 What do you get when you cross movie stars with politicians and throw some dangerous superpowers into the mix?

A group of entitled a**holes and a whole lot of carnage, according to Amazon’s antithetical superhero drama “The Boys.”

Back for its second season and all the rage, “The Boys” couldn’t have found a better time to shine than 2020. In the midst of a pandemic, racial unrest and an election year, the show’s commentary on politics, celebrity worship, racism, social media, corporatism, entertainment, nationalism and a host of other societal issues is eerily relevant.

“The Boys” focuses on two opposing teams: the Seven, a group of not-so-super heroes blatantly patterned after the Justice League, and the Boys, a band of everyday citizens each with an axe to grind against the “supes.” At the helm of the Seven is Homelander, a Superman-esque man-child who either gets what he wants or kills those standing in his way. Leading the Boys is Billy Butcher, a former SAS commando who believes Homelander raped and killed his wife (spoiler alert: she’s still alive and forced to raise Homelander’s child in secrecy).

Throughout the second season, it’s obvious that the two leaders are on a collision course. What’s not so obvious is whether Butcher is truly a “good guy.” His fits of rage and cold, calculating nature keep his character at arm’s length from descriptions like “lovable” and “kind hearted.” Viewers are left to decide whether his hatred for supes is understandable or prejudiced.

Backing the Seven with financial and (much-needed) public relations support is multi-billion dollar corporation Vought International. Vought serves as a reminder that even the most belligerent and murderous of the supes aren’t quite in control of their own situation. Despite the fact that he could easily kill everyone in the room, Homelander is repeatedly and forcefully reigned in by Vought executives.

Others, like the Seven’s Black Noir, are more content to accept Vought’s controlling hand, carrying out hits against innocents to save the company’s falling stock prices.

Season two’s main storyline picks up right where the show left off: the Boys are underground after killing a member of the Seven, and a leadership gap at Vought has left Homelander vying for control. To get back to their lives, the Boys must reveal that Vought has been creating superheroes all along with a formula called Compound V.

On the other side, a mysterious new addition to the Seven, aptly named for the internet’s first major racial extremist hate site, is derailing Homelander’s fight for public approval with her social media savvy. The electrically charged Stormfront, played by Aya Cash of “You’re the Worst” fame, brings a whole new series of twists and white supremacist turns to the show as her true identity comes to light.

If one quote could summarize her character’s message to viewers, it’s her response when caught in a web of hidden identities: “People love what I have to say — they believe in it. They just don’t like the word ‘Nazi.’”

Aside from the show’s main arc, the many subplots of “The Boys” boldly satirize celebrity sexual assault, hero worship, drug addiction, and the military-industrial complex. For instance, “The Boys’” Aquaman equivalent, a self-loathing and manipulative supe named “The Deep,” was banished from the Seven in season one for sexually assaulting Seven newcomer Starlight (who later switches sides after falling in love with protagonist and Boys member Hughie Campbell).

Season two chronicles The Deep’s return to the public eye with the assistance of supe cult The Church of the Collective, which issues him a wife to regain public trust — because married men can’t be sexual predators, of course.

It’s these powerful and multitudinous critiques of our own celebrity-obsessed, materialistic society and the great action scenes interspersed throughout that make “The Boys” such an entangling watch. Be sure to tune in every Friday for new episodes on Amazon Prime.