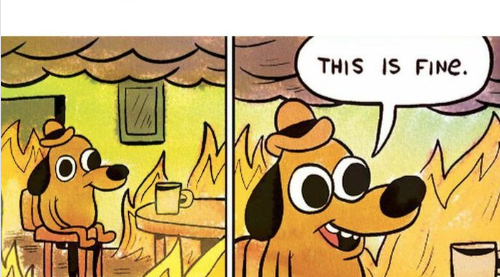 A post on the Calvin Memes for CRC Teens Facebook page about the cancellation of spring break.

Following the cancellation of spring break and Easter holidays, students immediately began posting about their frustration with the decision. Calvin Memes for CRC Teens, a popular student meme account, was flooded with posts regarding the schedule change.

“[The feeling when] spring and easter break get cancelled” captioned the image of a cartoon dog saying “This is fine” in a burning room.

Another student posted a similar meme to the group, writing, “This sucks so much and Calvin didn’t even apologize or at least acknowledge that it sucks.”

That post had nearly 200 likes and 60 comments. Some comments defended the decision as a preventative measure against students bringing the virus back to campus, and others decried the lack of breaks within the spring semester as detrimental to mental health on campus. Others questioned if Calvin would profit from the decision. According to Provost Cheryl Brandsen, the university will not make or lose money by cancelling spring break and ending a week earlier.

One of the comments linked a petition started by Troy Munchbach, a senior studying biochemistry and biology. The petition had over 500 signatures, as of Wednesday evening. Munchbach and his friends launched the petition on Change.org shortly after the email announcement. The accompanying letter focused on how breaks are important to student well-being and how the writers of the petition were uncomfortable with attending class on Good Friday.

“While I understand the concerns about bringing the virus back from an epidemiological standpoint, I as well as many others believe that Calvin has already demonstrated apt capability in handling the virus,” Munchbach said to Chimes.

Brandsen said that she and the administration would be happy to meet with the organizers of the petition but that this decision is non-negotiable. “This is something we need to do if we want to continue in-person classes during a pandemic,” said Brandsen.

Munchbach also said, “Losing Easter break is essentially losing the most important Christian Holiday, which is unacceptable in a Christian organization. The Bible teaches that sabbath is important.”

According to Brandsen, the administration has not received any backlash from supporting churches for holding class on Good Friday. She, Vice President of Student Life Sarah Visser and University Pastor Mary Hulst consulted each other prior to the decision and agreed that it is regrettable to hold classes on Good Friday. However, the cancellation is necessary to prevent students from traveling home and carrying the virus back with them. Campus Ministries is currently working on ways to commemorate Holy Week in other ways.

Student Body President Claire Murashima also responded to student concerns on her Instagram account. Students again raised concerns about attending class on Good Friday and wondered if spring break days could be distributed through the semester, like how fall break was.

Murashima said that she’s grateful that the leaders are taking the pandemic seriously and warned against a knee jerk response. “I want to caution us against assuming that our leaders had bad intentions in making this decision,” Murashima said. “They work in consultation with local health authorities (Kent County Health Department) as well as follow guidance from CDC, and engage perspectives of faculty with a science and public health background in these decisions.”

Student senate did not play a role in making the decision. Murashima and Brandsen both noted that peer institutions are also cancelling their spring breaks.

Brandsen apologized that the announcement seemed to lack sympathy for the student body. “Ironically, a different communication on a different topic was reviewed by a small group of students. Their response: ‘get to the point; we all know that everyone feels badly about lots of different things and you don’t have to remind us of how challenging the times are,’” Brandsen said.

The Center for Counseling and Wellness and the Student Life division will be looking to continue supporting students in the spring, Brandsen said. She also says that she expects faculty to extend the same grace they have been extending this fall.