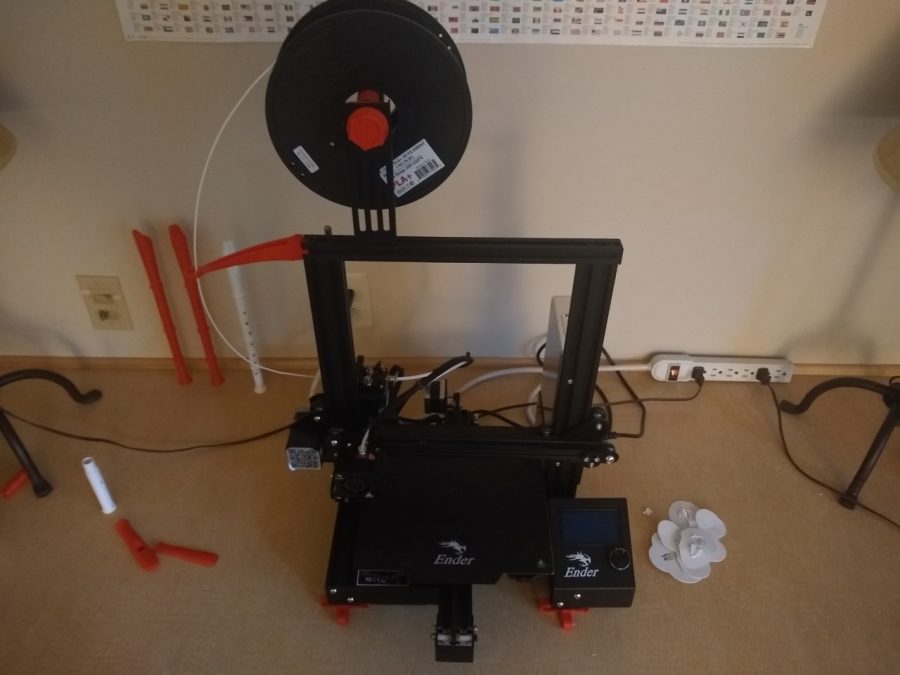 As of late, the tinny sounds of recorders have been vibrating the walls, vents, and floorboards of the Knollcrest East apartments. For those wondering who is practicing an instrument used in meme versions of The Titanic’s ‘My Heart Will Go On,’ juniors Simon Detmer, majoring in biology and geology, Adam Tjoelker, studying mechanical engineering and geography, and Jack Vandermolen, math and engineering, have an answer.

“We printed our first recorder because we were bored one evening and thought it would be a funny thing to print,” Vandermolen. “Everyone in our apartment is at least somewhat musically inclined, so the potential addition of these quirky little instruments to our collection of noisemakers was enticing.”

Quirky as they are, these recorders are the product of the involved, complex process of in-home 3D printing.

The housemates first started 3D printing when Detmer brought a printer he built over the summer to the apartment. Soon after, they learned about 3D printing together, working on small projects and improving the homemade printer. Then came the recorders.

The group first downloaded a printing file for the instrument from Thingverse.com, a website where users share 3D printing designs. This model produced a solid first recorder, and after about fifteen minutes of sanding, it was ready to play.

“The initial print conjured up all sorts of possibilities for future recorder-based projects,” Vandermolen said. According to Tjoelker, their “dream is to create recorders in different voices (alto, tenor, bass) so we can play pieces with more interesting harmonies, different keys so they can play with other instruments, and perhaps some more experimental recorders, such as a recorder that is intended to be played in minor, or a recorder that can be played with one hand.” With these goals in mind, the team eventually came up with their own model that would be easier to modify.

Creating the new model has been “an iterative process,” according to Vandermolen. They began by using calipers to measure the dimensions of the first recorder and modeling it with the computer-aided design program Autofusion 360. Their first trial run resulted in a slightly-off set of pieces that couldn’t be put together. By changing the dimensions and trying again, they were able to print their own working, modifiable recorder.

However, due to lower tone quality and higher playing difficulty, they are working on improvements. “Each new prototype introduces new challenges and questions,” noted Vandermolen, “But it also hopefully yields a distinct upward trend in the success of the design.”

A better design is not the only thing the process has yielded. The project has made waves in the Calvin community, including being featured on the Overheard at Calvin Facebook group. “Overheard in KE: Recorder practice???” read the original post by Alexandra Utke, with Karsten Rees commenting, “HOW do i get invited????”

The creators even mentioned that they’ve received anonymous song requests on sticky notes, presumably from students who have heard them playing. Vandermolen said the community’s reaction to the unique project has been “overwhelmingly positive,” and had a message for their upstairs neighbors: “Thank you for tolerating us!”

As much as people are taking notice of the recorder project, Detmer, Vandermolen, and Tjoelker are a few among several Calvin students experimenting with 3D printing.

Senior electrical engineering major Caleb Schmurr has been 3D printing since high school. “The idea of being able to design something on a computer and have it made out of plastic right in front of your own eyes is kind of epic,” he said. “I think the technology is really interesting.”

He bought his own printer over the summer and has made a variety of items, including a guitar pick, a nautilus gear set, a custom pencil holder, and a “small system that waters and provides light to indoor plants.”

When asked about his dream printing project, Schmurr said he’d like to try chocolate. “It would be really fun to print random shapes out of chocolate,” he said. “I would definitely print a chocolate mousse.”

AlthoughSchmurr hasn’t yet printed chocolate and the recorder creators are still perfecting their model, it’s clear that 3D printing is making a splash at Calvin.

“We see this not only as a fun project,” Detmer said, “But also an educational experience that we hope to share with others.” And share they have—according to Tjoelker, they’ve been making recorders for friends for about a month.

The group admits they have tried to play the ‘Titanic’ theme song, and if their enthusiasm is any indication, it looks like the printing will go on.