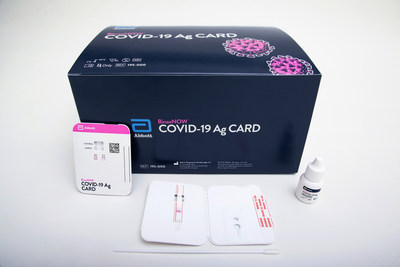 This antigen test is one of six tests Abbot offers

Calvin will soon be able to test students for COVID-19 using the Abbott tests, in addition to the PCR tests, according to Calvin University President Michael Le Roy. These tests take only 15 minutes to receive results. The PCR tests that Calvin offers and will continue to offer take up to 48 hours to receive results.

Approved under the Food and Drug Administration’s Emergency Use Authorization, Health Services, partnered with Helix Diagnostics, will only use the Abbott test for diagnostic testing. If Health Services suspects that a member of the Calvin community has the virus based on their symptoms, they will opt for an Abbott test over a PCR test for quicker results. Screening testing, to monitor athletic teams, nursing students or residence halls, will continue to use the PCR tests.

Like the PCR tests, the Abbott tests will involve a nasal swab.

According to Le Roy, Calvin’s contract with Helix, gives the university guaranteed access to new testing technology, as well as more tests when needed.

“We are heading into a phase, sometime [this winter] where there’s going to be a lot more access to screening tests that are cheaper and faster and closer to being instant,” Le Roy said.

Helix offers Calvin access to new tests, as the technology improves. Le Roy stressed that this partnership gives Calvin an edge that it would not have had. Many universities do not have access to widespread testing.