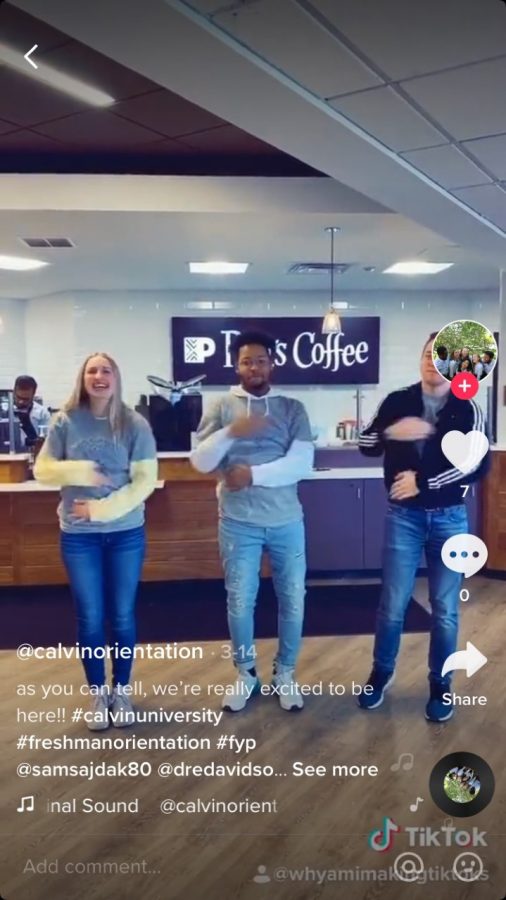 The orientation board used TikTok to welcome new students.

According to an executive order signed by President Donald Trump on August 6th, these Chinese-owned applications “[threaten] to allow the Chinese Communist Party access to Americans’ personal and proprietary information.” The order would have banned downloads and updates of both apps as of Sept. 20.

However, a judge blocked the ban of WeChat on Sept. 19 with an injunction. The Trump administration has since appealed this preliminary injunction and will consider it at an Oct. 15 hearing.

Likewise, another judge blocked the ban of TikTok on Sept. 27, and the Trump administration has granted preliminary approval for Oracle and Walmart, both American companies, to buy all American operations

Zach Priebe, a junior biology major who uses TikTok, noted that the app is useful but not necessary to his life. “It’s a good way to kill time,” Priebe said. “If they think we need to take it away, it’s not like I won’t live without it. It’s not like I’m going to be sad or something when it’s gone.”

Priebe noted that removing the platform has a greater effect on people who make a living by using the platform. He noted, however, that “there are other ways of making a living,” such as by moving content to a different platform.

“Chinese people use WeChat for almost everything,” biology professor Anding Shen said. “We never use cash or credit cards [in China] anymore. When you go to the grocery store, you just scan your phone.”

Shen noted that cultural differences between the United States and China affect how individuals think about social media, particularly cultural perceptions of privacy.

“In the United States and Europe, people highly value privacy,” Shen said. “In Chinese culture, privacy is perceived differently. In China, if you want to keep something private, people ask, ‘What are you hiding?’” In addition, people are much more willing to talk about topics Americans perceive as private, such as income and health problems.

Shen emphasized that Chinese users use WeChat wisely. “Of course people think twice before posting anything. And there are ways around the censors, which primarily utilize text readers. The text readers are not very good at detecting information in pictures or in recorded messages. So you can send information in an image or a recorded message and it’s much more difficult for the censor to recognize it.”

Shen noted that blocking apps like WeChat and TikTok in retaliation to the Chinese government’s ban of US social media companies, such as Facebook, Google, and WhatsApp, shows that the US is willing to sink to the same levels of China.

“The Chinese government often works with a very heavy-handed, top-down structure. No one expected the United States to work in the same way,” Shen said.

In addition, banning an application isn’t the most effective way to guard content. “There are always still ways to access particular platforms or content, such as by downloading the software from a server in a different country,” Shen explained. Similarly, individuals can still access WeChat through software that provides underground access to the app.

Although the ban currently only prevents users from downloading WeChat and Tiktok, as well as updating the current version, the political tension between the United States and China have significant ramifications for the everyday life of international students. For example, the number of flights between the United States and China has been drastically reduced since the Covid-19 pandemic. The price of existing flights has also increased dramatically, often exceeding $10,000.

In addition to increasing flight costs, the administration has also proposed new student visa regulations. Current visa rules determine students’ visa status on whether they are enrolled full-time at an American university. Under the proposed regulations, students’ visa status would be approved for either a two or four year period, regardless of whether they complete their degrees in the allotted amount of time.

“If you don’t finish in time, you can file for an extension,” Shen said. “But there is currently a six-month waiting period for extending student visas, and there’s no guarantee that the extension will be granted.”

“[The administration] has just made life so difficult for the Chinese students,” Shen said. “Students want to come here to study. They provide important revenue for US universities and technical skills for the workforce. It’s really not fair to these students to make everything so challenging when it’s not their fault.”

International student Moses Yang, a junior mechanical engineering major, uses both WeChat and Tiktok. He finds that the proposed WeChat ban is particularly difficult. “Students use WeChat to talk to their family and friends back in China. It’s just so convenient,” he emphasized. “Why are they trying to ban it now, with Covid and the election coming?”

Although he disagrees with the ban, he partially understands the reasons for it. “WeChat is just used by all the Chinese,” Yang said. “Tiktok, though, is used by people all over the world. It’s a place you can go to relax. It’s pretty positive. Without Tiktok, America would just be a sadder place.”