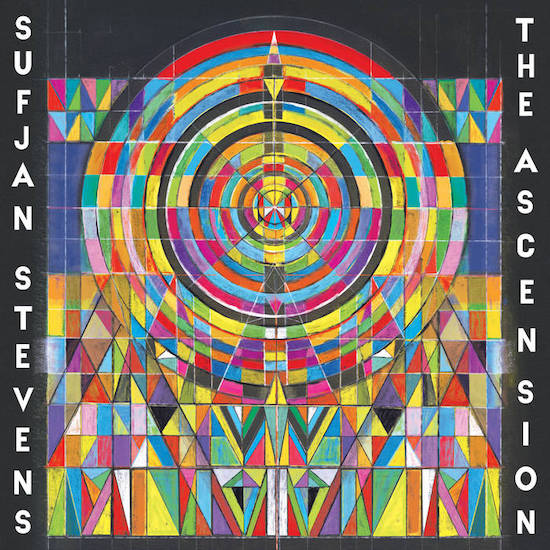 With his first solo studio album since 2015’s “Carrie and Lowell,” Sufjan Stevens steps back from the acoustic sound he is best known for, instead embracing lavish electronic production. But while the album is a sonic departure for Stevens, the deeply personal lyrics which form the foundation of his music remain.

The opening track, “Make Me An Offer I Cannot Refuse,” immediately sets an intense tone for the album, launching directly into an 808 beat not unlike something you’d hear on the radio, followed by a screaming synth break, and tying it all together with echoing ethereal vocals that fade off just to be replaced by crescendoing synths once again. The song is a statement of what’s to come. It feels as though Stevens aims to present as directly as possible that this album is wholly different than any of his previous work.

Stevens’ uniquely light, heady vocals lend themselves particularly well to acoustic music, like a subtle lullaby or a soft folk song sung around a crackling fire. However, despite the layered production of “The Ascension,” he manages to prevent his vocals from being overshadowed, whether by intensifying his performance like in the climax of “Tell Me You Love Me,” or by layering and echoing the vocals like in the opener.

The album is full of songs which in the first few minutes seem as though they’d be a low point on the album, stretching on too long with their droning refrains which, though sonically pleasant, feel unspecial–unsurprising on an album for which the average song length is five minutes. But these songs often pick up in the end, encouraging you to stick around for the next one.

In “Tell Me You Love Me,” Stevens starts the track with an immediately depressing line: “My love, I’ve lost my faith in everything.” He continues, “When it all falls, what’s the use of open hands? / Can you tell me this love will last forever?” As the world is falling apart and wholly unpredictable, Stevens suggests sometimes the only thing we can be certain of is our love for one another. The song builds slowly, as Stevens’ lyrics seem to become more sure of themselves, all swelling to a gripping climax in which he declares “I’m gonna love you,” letting go of the uncertainty of the world.

Many songs on “The Ascension” have clear influences from the glitchy and industrial sounds common in most modern electro-pop. “Goodbye To All That” features a beat which sounds like someone slapping a metal pan, alongside electric ringing and buzzing straight out of an 80s arcade. “Gilgamesh” is accompanied by distorted, fuzzy synths in irregular rhythms, like the hum of television static. But underneath these modern popular sounds are orchestral arrangements, beautiful, almost romantically depressing lyrics, and the enchanting voice that sets Stevens apart.

On the closing track, a twelve minute epic titled “America,” Stevens concludes the album on a poignant though dismal note, blending religious imagery with themes of “faith” in American culture. It seems Stevens, like many in this age, has lost his faith in the American dream, the idea that anyone in this country can find success or even happiness. He laments, “I have loved you, I have grieved / I’m ashamed to admit I no longer believe.”

Stevens also repeats the refrain “Don’t do to me what you did to America,” leading the listener to question whom it is he’s speaking of; who did this to America? An obvious answer would be “God,” given the religious imagery in the song, but according to an interview with The Atlantic, “it’s not a religious song at all… It’s overtly a political protest song.” But before the listener can think of an answer, Stevens answers it for them, echoing his previous refrain with, “Don’t do to me what you do to yourself,” implying America is pulling itself apart. Perhaps the ambiguity of conflating God with American culture is intentional, reflective of a culture which seems, sometimes, to hail its government as a deity, infallible, even when in contradiction to their own faith.