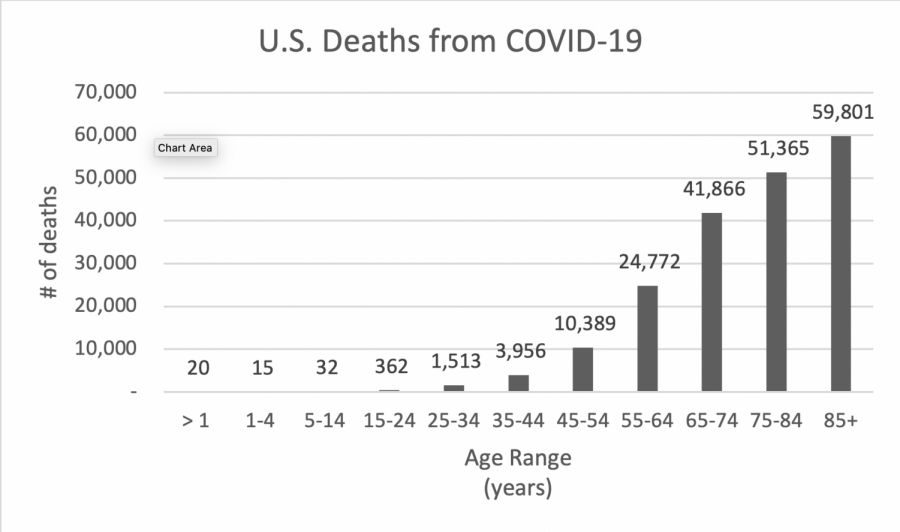 According to the CDC statistics, young adults are one of the least likely groups to die from COVID although they largely contribute to its spread.

For most people, COVID-19 is largely a mystery. For Calvin students Heidi Groenboom and Liz Memmelaar, contracting and recovering from the virus granted them a more in-depth understanding of how it works. The two shared their experiences with COVID to help students understand what contracting the virus can look like.

For senior Groenboom, her experience with COVID occurred in July, when she tested positive for the virus. She had contracted it from one of her housemates whose boss tested positive. While her housemates were largely asymptomatic with relatively mild symptoms, Groenboom experienced more severe symptoms such as sore throat, fever, hot flashes and achy bones which lasted three days. After these three days, Groenboom quarantined for another 10 days. During these few days, she ended up moving to her parent’s house so that they could take care of her.

Memmelaar, a senior majoring in nursing, shared a similar experience with COVID in July. Memmelaar’s symptoms were fairly mild and included a headache, a head cold, minimal breathing while being stuffed up. For her, the experience with COVID was more frustrating. She got infected with COVID through work. Initially, she tested negative for the virus on a Friday but ending up testing positive less than 72 hours later on Monday.

In her experience, the hardest part was not the illness itself but rather the isolation that came with it. She spoke about the difficulties that came with feeling physically fine but having to remain in isolation. For people who test positive, isolation usually lasts for 10 days compared to the 14 days that individuals exposed to people with COVID undergo.

Calvin seems to be handling the COVID crisis well. Compared to other universities that have had to shut down due to a large influx of cases, Calvin has remained open with relatively low cases. As of 5 p.m. on Wedn., Sept. 30, there were no active cases on campus.

As a communications major, Groenboom mentioned being impressed with how Calvin has been communicating with the students in this crisis.

“I love the way Calvin has been making sure to keep the wording considerate and very well thought through, being careful what they say and realizing how hard it is on the students,” said Groenboom.

Although Groenboom had initial reservations about how long Calvin would remain in-person, she found herself being proved wrong. Seeing the consistently low COVID cases makes her more optimistic. Although she is still uncertain, she does not anticipate an extreme outbreak occurring on campus. In her opinion, Calvin students are willing to do what it takes to stay on campus until Thanksgiving.

“Calvin realizes that if we don’t follow the rules, it’s only going to make things worse for us,” added Groenboom.

On the other hand, Memmelaar had a far more pessimistic take on future possibilities. She anticipates a shutdown of the campus and has postponed purchasing a parking permit in anticipation.

“I am waiting for the boom to happen,” said Memmelaar.

Her experience with “false negatives” in which positive cases appear to be negative made her skeptical of the reliability of the tests. In her opinion, there are still a lot of unknown factors when it comes to COVID. Memmelaar believed that she contracted COVID from her workplace even though they wore masks at all times and frequently sanitized surfaces. Thus, to her, these precautions may not be enough to stop COVID.

“It surprised me how well we’ve been doing,” said Memmelaar.

For her, a large problem is the line between freedom and control. Although she believes that the rules are important to maintain at all times, she is not certain that Calvin can control over 3,000students. She describes her younger sister’s frustrations as a freshman dealing with all these rules. Freedom is an important part of the college experience, but it needs to be balanced with maintaining rules. Despite commending Calvin’s allowance of freedom, Memmelaar was skeptical that Calvin could maintain control over students and enforce all necessary rules.

Although the campus remains largely COVID-free, by going off-campus, students frequently compromise the safety of campus. Memmelar was adamant that students should have the freedom to make decisions but agreed that not all students were likely to make smart decisions that would keep the community safe. In her opinion, it is impossible to be certain of most things when it comes to COVID.

According to Memmelaar and Groenboom, with the unpredictability of COVID-19, it is possible that the Calvin situation could turn around. The low numbers of COVID cases on campus may be reason to celebrate but the future still remains uncertain.