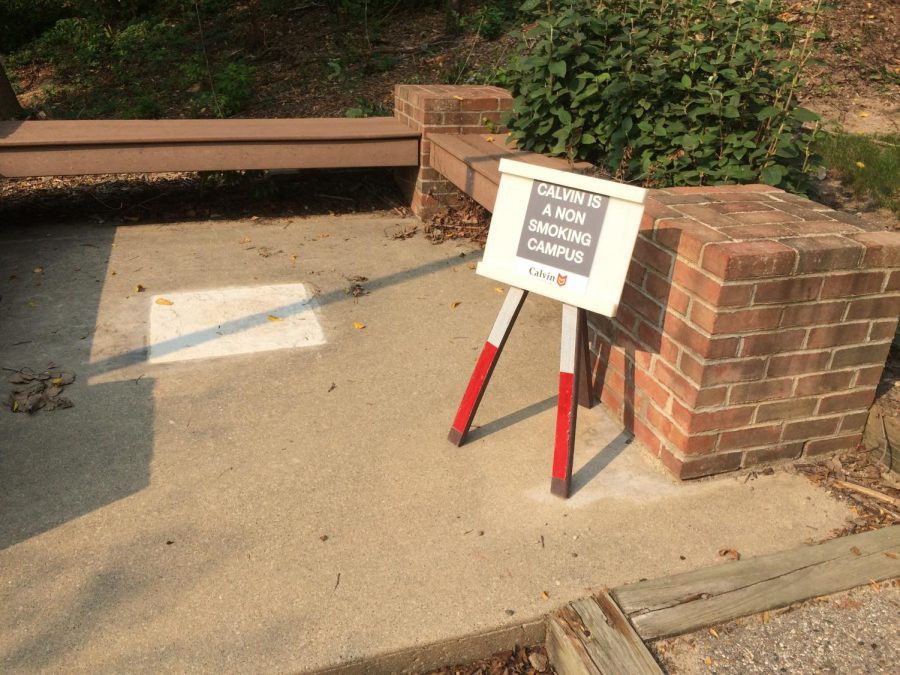 Due to risks presented by the novel coronavirus, use of smoker pits like this one outside Knollcrest East apartments is now prohibited.

There was a time when some Calvin professors would smoke cigars while lecturing to their classes. That practice has since disappeared, but Calvin has still maintained several smoking pits where students and faculty alike can enjoy a cigarette on campus. As a result of the COVID-19 pandemic, however, those smoking pits have been shuttered per a decision made last March by the Safe Response Team in collaboration with Calvin Facilities and Environmental Health and Safety personnel.

“From a health and safety perspective, two of the biggest concerns are the maintenance of the smoking pits by Calvin staff and given that COVID-19 is a respiratory disease, the generation of secondhand smoke,” said environmental health & safety officer Jennifer Ambrose. Smoking pits in use have to be consistently cleaned by Calvin staff, which could lead to exposure through used cigarette butts. According to Ambrose, secondhand smoke could cause coughing or wheezing by students exposed to it, behavior that increases the chance of COVID-19 spread.

With all of the smoking pits on campus closed, students and faculty looking to smoke must find other options. In a March 17 email to on-campus students that announced the switch to a non-smoking campus, Jay Wise, director of college housing and operations, asked that “if you must smoke, you travel off-campus to do so or smoke inside of your vehicle.”

Not everyone is convinced that students will follow these guidelines. Tim Lee, Calvin student and former smoker, is one such skeptic, saying: “Of course [smokers] would try to smoke inside the dorm rooms if there isn’t a single smoking pit around the campus.”

Director of facilities Russell Bray indicated that the smoking on campus seems to have decreased. “We were for a while seeing cigarette butts in the former smoking pit areas — I think people were just used to smoking there — but we’re seeing less and less of that,” he said.

Calvin will likely remain a non-smoking campus until a vaccine is in wide circulation or research indicates that airborne molecules that result from smoking do not constitute a COVID threat. When asked when that might be, Bray said, “I imagine that policy will stay in place through the remainder of this academic year.”

Calvin has historically been a smoking-friendly campus, particularly in comparison to other institutions. “I don’t know numbers, but it seems like we’re one of the few campuses around that still allows smoking… I imagine after this whole thing has passed we revisit the conversation,” Bray added.

When the time comes for that conversation, Bray believes that a number of factors will be at play. “We would want to engage the community and understand what the benefits are… I think it needs to be a healthy, robust conversation. Obviously, we have people on campus who do smoke and they want that opportunity to be able to do that.” At the same time, Bray recognized concerns about secondhand smoke and the impact the presence of smoking areas on campus has on recruiting.

For now, the school’s primary concern is the safety of students on campus in the midst of the pandemic. “This wasn’t a decision made about whether or not it’s right to be a smoking campus or not,” said Bray. “It was completely made for the health of campus and to slow the spread of the virus this semester and make sure we were able to have a healthy academic year.”